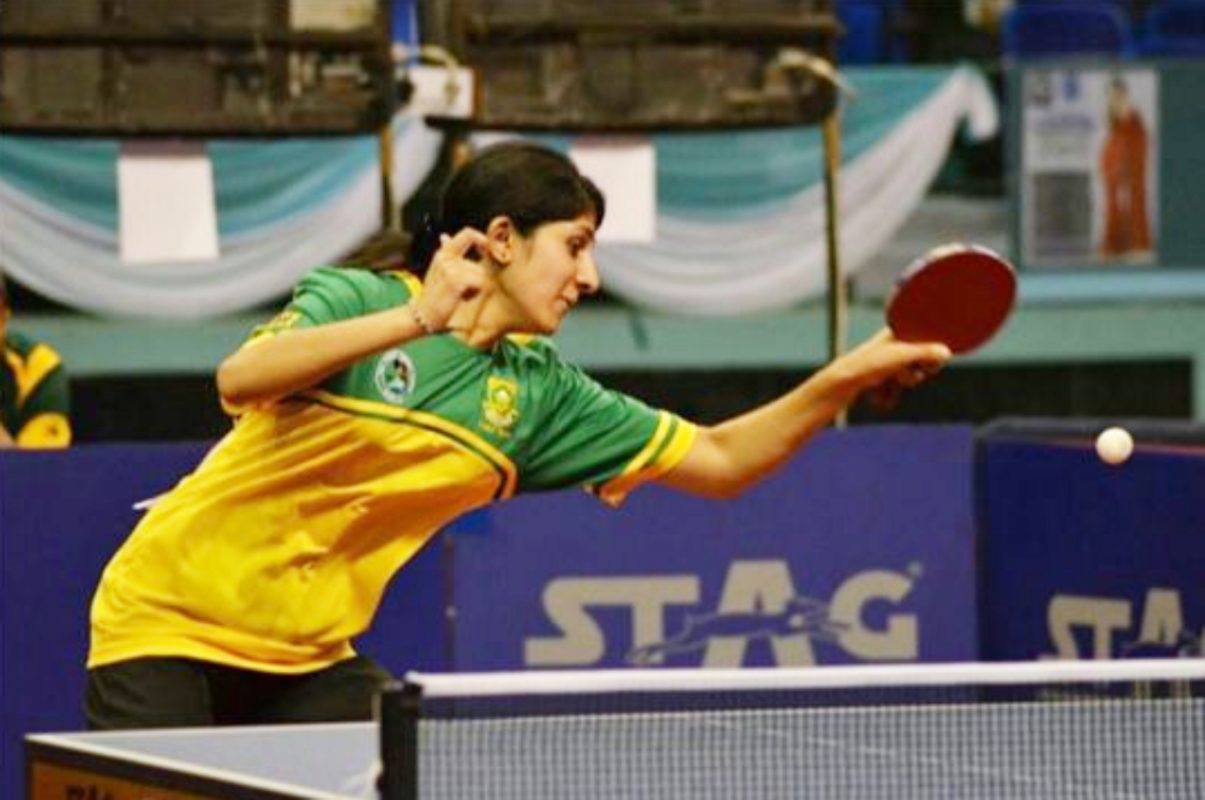 Danisha Patel and Table Tennis are a love affair that seems to be nothing short of a match made in heaven. At the age of 10 she discovered her grandfather was getting rid of an old table tennis board he stored on his roof, but her brothers took it and repaired it.

After some time Patel started playing for Progress Primary School and Nirvana Secondary.

She started training with a professional coach in 2005 and was selected in 2007 to  represent Gauteng in the junior national championships for under 14 and 17. It was there that she shone and got recognition by the higher bodies. This early success propelled her and soon she was representing her Province, Gauteng and also selected in the Senior National team.

Since 2014, when she won the Nationals in the senior women’s category, her dominance has continued unabated. She’s won all titles, each year until 2019, thus making her the first female in South Africa to win six consecutive titles in table tennis.

If Patel is not donning the green and gold, she plays in the Gauteng Premier League for the Anchors located at Westdene Recreation Centre.

Patel took time out of being a Biokinetist at Virgin Active and had a sit down with Lonwabo Nkohla to chat about her journey through and around the exciting sport of Table Tennis.

How and when did you come across Table Tennis and what got you interested in this now growing sport?

I started playing table tennis since the age of 10. My grandfather had an old table tennis board kept on his roof which he was about to throw away, but my brothers repaired it and took it home. Since then, we have been playing table tennis as a pastime. Eventually, my brother and I started playing for our primary school (Progress Primary School) and carried on to high school (Nirvana Secondary). Since 2005 I started training with a professional coach, then in 2007 I represented Gauteng in my first ever junior national championships for under 14 and 17. It was there that I performed well as a new comer as was recognised by the higher bodies.

I think my passion for the sport is what keeps me going. I have always liked a challenge and no match is easy so I have to fight, play hard and push through. Even in tournaments, where I have lost, I am always learning.

Winning 6 consecutive times, how much pressure does that put on you every time you take to the court?

I know my capabilities and strengths and weaknesses, so as long as I play MY game from the start, I’ll play my best. With the amazing and talented upcoming juniors after me, I have to keep focussed.

Take us through a day in the life of Danisha Patel when preparing for an upcoming Championship or tournament?

I have to make sure I get good practice time with my training partners. That can be tricky with everyday work life and commitments. If we can push at least 2 sessions during the week and score the weekend as well that’s good table time. Working at a Virgin Active as a Biokineticist, I make sure my fitness training does not slack. Better preparation means more confidence.

Are you still part of the Anchors in the Gauteng Premier League?

Yes, our Club is Anchors and I am in the premier league for Anchors A. Our home Venue is at Westdene Recreation Centre. With my fellow teammates (Chetan Nathoo – also SA men table tennis. Ismail Badat and Brendon Bartlet) we just won topped the log in the first season.

Durban is host city for the upcoming Table Tennis World Championships – how does it feel when you think about the possibility of representing your country at the highest level at home?

The world’s best table tennis players will be in SA!!! The players I love to watch, the players I follow on Instagram. To play against them will be a dream come true. Even though it’s going to be tough as hell!

How is the representation of women in Table Tennis in SA?

There are a lot of upcoming juniors. But not as many females. Even with my coaching ventures, there are hardly any females and if there are, they may be interested in other sporting codes.

Do you think the sport is well recognised and supported in the country? If not, what would you like to see change?

There are still many ladders to climb to get the sport recognized but I do think that all schools should offer it as a sport, even if it is just recreational. Thats where is started for me.

Photo 1 Caption: Danisha Patel and Table Tennis are a love affair that seems to be nothing short of a match made in heaven. She chats about her early success and becoming a national champion. Photo: Supplied