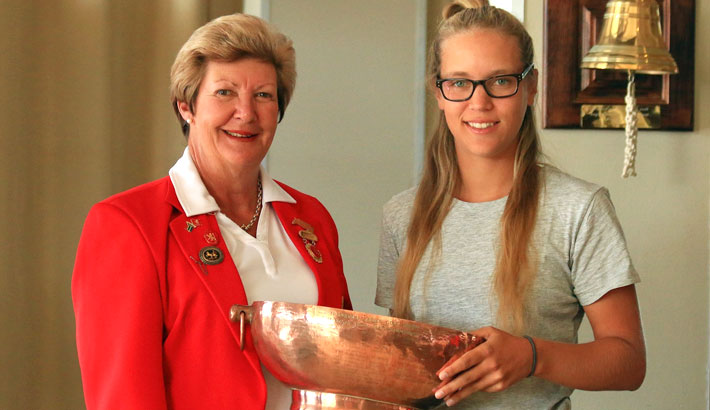 Cara Gorlei added to her trophy hall in what has so far been a breakout season for the Western Province golfer when she defeated Gauteng’s Natasha Carlsson 6 & 4 to claim the ProShop Gauteng Championship Match Play title on Tuesday.

Gorlei breezed past Casandra Hall from Ekurhuleni 6 & 4 in the first round at Randpark Golf Club and dug in to dispatch Zethu Myeki from Border 2 & 1 at the Bushwillow course.

That took the Milnerton golfer into a semi-final battle against local favourite Kaleigh Telfer, but getting past the recent Free State and Northern Cape champion proved to be a tough task.

“I wasn’t playing badly, but I just felt a little out of sorts,” Gorlei explained. “I lost four holes with two pars and two birdies to Kaleigh and turned four down. I got it together after Kaleigh dropped the 10th and 11th, and I won the 13th with a birdie, though.

“I clawed my way back into the match and we were all square heading down 17 and 18, and won the match with a par at the 18th. It was a really tough match, because Kaleigh never stops fighting, so I was definitely ready for the final against Natasha.”

Although she never surrendered a hole against Carlsson, Gorlei described the match as tough.

“Natasha was a great opponent,” Gorlei said. “She has really come on in leaps and bounds over the last year. In the end, I think my experience and form just won out.”

Recently named the Womens Golf South Africa Senior Player of the Year for 2013/2014, the Cape golfer is enjoying a great run of form ahead of her departure for the United States where she will take up a golf scholarship at the University of Arkansas.

In addition to all the victories, Gorlei has sustained her number two spot in the WGSA Senior Rankings with two runner-up finishes and a slew of top 10 placings.

“I must admit, it is nice to compete again and to be playing so well,” said Gorlei, who put golf on the back burner to concentrate on her matric exams last year.

“I’m building nice confidence and working out niggles in my game, and it will be good to start a new chapter in the United States with some good results.”

Next up, Gorlei is looking forward to leading Western Province in the WGSA 72-Hole Teams Championship at East London Golf Club later this month.

The condensed 2021 Sunshine Ladies Tour is set to be boosted with the introduction of the Homegrown Award, which will see a South African winner of the South African Women’s Open take home an...