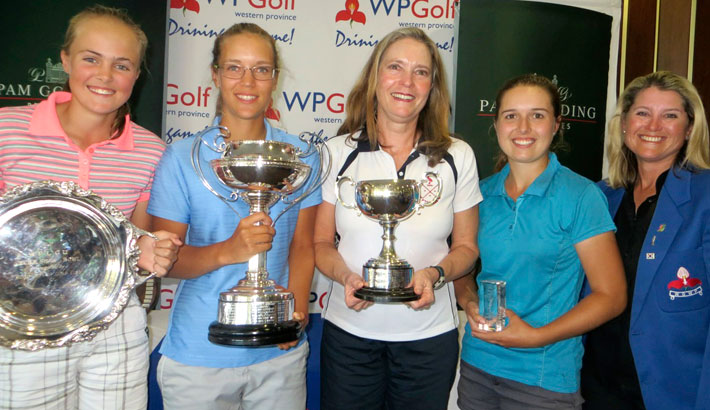 Just a little over a month since she lifted the Eastern Province Championship Match Play title, Cara Gorlei was in ascendancy again in the Pam Golding Properties WGWP Amateur Championship.

The pair have been team mates for a number of years, having come through the Western Province Junior Development Programme.

Gorlei first defeated fellow squad member Ashleigh Mills from Steenburg 7 & 5 in round one, got past Bellville’s Tara Griebenow with a 2 & 1 win in the second round and beat Clovelly’s Katia Schaff 4 & 3 to reach the final.

“I played with Zayb in the South African Women’s Inter-Provincial last year and she was one of stars on the team,” Gorlei said. “I knew I was in for a tough match, because Zayb is very skilled in match play.”

The pair halved most of the holes on the front nine, but Gorlei turned 2-up after winning the fifth and ninth holes in birdies. She won the 10th hole with a par, halved the 11th in pars and lost the 12th to Fredericks.

“It was a fantastic match against a gritty opponent.”

Gorlei enjoyed a hat-trick of victories in the prestigious Nomads SA Rose Bowl, Nomads SA Girls Championship and the Gauteng North Championship in 2014.

However, with matric exams looming, the 19-year-old took time out to focus on her studies and lost a bit of ground in the rankings.

Having secured a golf scholarship at the University of Arkansas, Gorlei wants to make the most of the next couple of months before she leaves for the United States in August.

Fredericks, meanwhile, had to visit the 19th hole twice against Swiss golfer Pauline Tainton in the first round and recent Border Championship winner Zethu Myeki in round two.

She scored a decisive 4 & 3 victory in her semi-final match against Boland Junior Championship winner, Cassidy Williams, to meet Gorlei in the final.

“Cara is one of the top ranked golfers in the country, and it was very unusual for me to play against her and not with her,” Fredericks said.

“Usually the two of us are working out how to beat the opposition, so it was a strange for me. I tried to give her a run for a money and I really enjoyed the match. It was a great challenge, but it kept me on my toes.

“I tried not to open the door for her, but in the end, her good shots won the day and I think the best player won on the day. It was an awesome experience for me and I learned a lot from the match.”

Kaylah Williams, another 13-year-old rising star of the Western Province Junior Development programme, defeated Tessa Granger to lift the Cecile Shaw Trophy in the B-Division, while Bronze Division stroke play champion Julie Dyer made it a double when she defeated Jane Wollaston 1Up to win the Standley Cup Bronze Division (Handicaps 19-30).