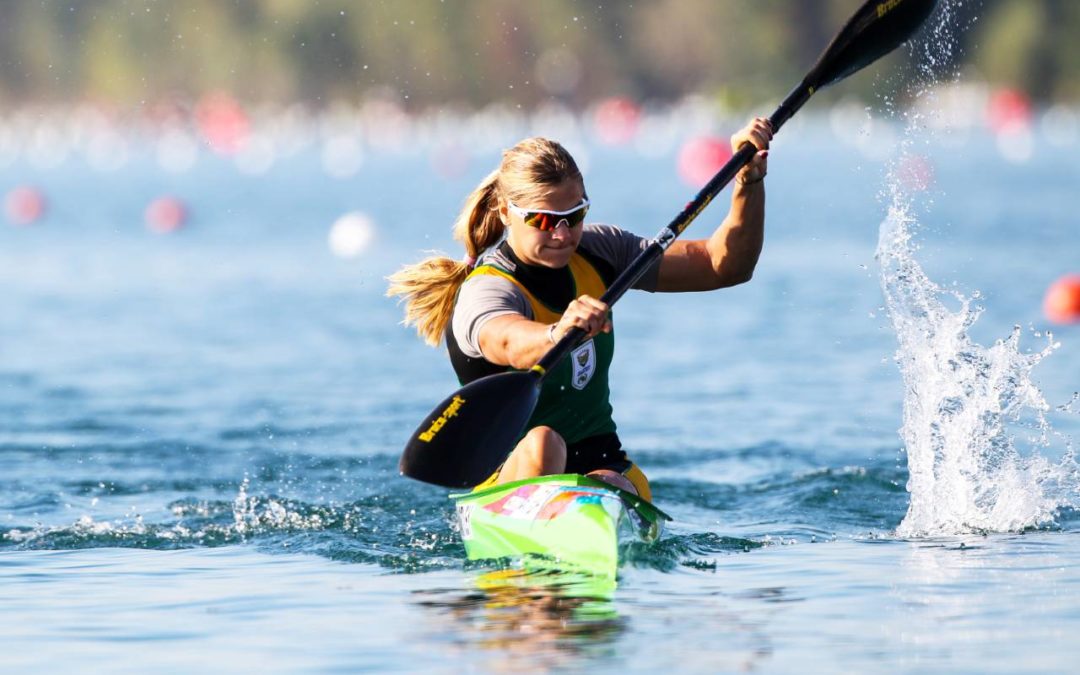 As she eyes out a potential spot at the 2021 Olympic Games in Tokyo, 2012 Olympic medallist and South Africa’s most decorated sprint canoeist, Bridgitte Hartley, reflected recently on a career that has spanned more than a decade and a half, making her one of the most decorated international paddlers in Canoeing South Africa’s history.

Although she has a talent and drive like very few, Hartley’s journey to canoeing took a roundabout route and she was a self-confessed late starter.

“I have been a sports nut my whole life from playing netball growing up to athletics, gymnastics and even some cricket,” she said during a recent live social media interview on the Canoeing South Africa Facebook page.

“When I moved to Richards Bay I found a passion for surfing and that became a dream for me to maybe go and surf on the world tour.” – South African sprint canoeist, Bridgitte Hartley

“When I moved to Richards Bay I found a passion for surfing and that became a dream for me to maybe go and surf on the world tour.”

“I went to boarding school at Pretoria Girls High School and played every sport that I possibly could, so most weekends I was playing school sport.

“If I did get the chance to go home I would go paddling with my dad and my brother but they were so much faster than me so they would leave me behind!” she quipped.

“It wasn’t something that I fell in love with right away, that’s for sure!”

After studying and training at the University of Pretoria, Hartley was selected for the national team where she was to represent South Africa at the African Sprint Championships.

“I raced for South Africa for the first time in 2005 at the African Championships in Senegal.

“It was probably the first time that I had been further than South Africa’s neighbouring countries so it was a big thing for me to be representing South Africa at those championships.”

From there her international career flourished with many national selections and she joined a strong South African sprint squad that would travel around the world competing in flatwater sprinting regattas. Being amongst fellow South Africans made these training camps and regatta’s easier to deal with.

“It was enjoyable being in the training squad because you are in the zone during your camps but when I was training by myself I felt that the weeks were fine because I was working hard but the Sunday’s became tough for me.” – Hartley speaks on training on her own after the Beijing Olympic Games

“I had a fantastic introduction to racing for South Africa because we had a big squad of paddlers that would travel and race together but after the Beijing Olympic Games I was left on my own basically.

“It was enjoyable being in the training squad because you are in the zone during your camps but when I was training by myself I felt that the weeks were fine because I was working hard but the Sunday’s became tough for me.

“When you overseas you can’t just phone a friend and go and have coffee with them so I think for me the most challenging part was a little bit of loneliness.”

Hartley has gone on to win two Sprint World Championship bronze medals to go with her Olympic medal and she will attempt to qualify for the Tokyo Olympic Games in 2021.

She has enjoyed success as a marathon paddlers on both flatwater, where she has raced with distinction at the World Marathon Championships, and on the domestic river marathon scene, where she added the Fish Marathon K1 title to her CV, winning with it the national women’s’ K1 river marathon title.

Photo 1 Caption: Sprint canoeing star Bridgitte Hartley has been paddling competitively for South Africa for 15 years and has become the nations most decorate sprint paddler with two World Championship medals and a famous Olympic bronze medal from the London games in 2012. Photo: Supplied/Gameplan Media