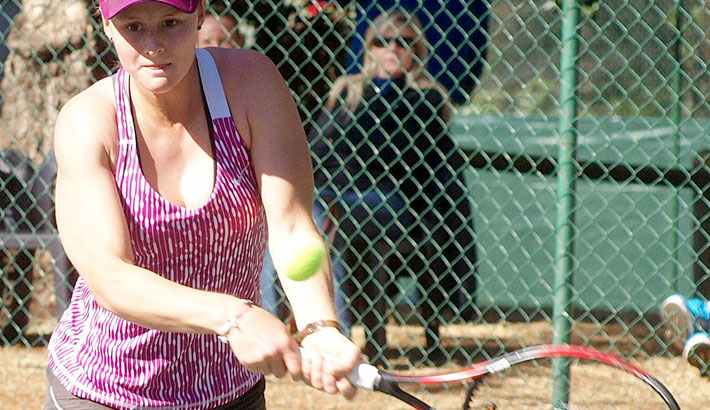 Admittedly de Bernardi carried a hip strain injury going into the final but all credit to Hattingh for keeping her composure and focus and dominating the final.

“I was happy with my game but felt I held back a bit maybe because of nerves. It was my first final since the Junior nationals last year, so I was kind of tentative out there,” said Hattingh.

“I was keeping pressure on Clothilde because I know she has a good forehand, and I didn’t want her to get into any rhythm with her forehand. But I think I played a great game, not only today in the final, but all week. I am really chuffed with the win,” said the new champion.

A visibly disappointed de Bernardi said she was “frustrated” and “hurting badly” after the final. “My right hip has been giving me so much trouble.

“I am playing my first tournaments in four months at Sun City after sustaining the injury and it’s not better,” said de Bernardi. “I was hurting badly out there, and just could not play the game I normally play, and move like I normally do around the court.”

Hattingh broke early in the opening set and dropped only one game winning the set 6-1.

In the second set, de Bernardi broke in the first game to lead 1-0. Hattingh immediately broke back and in the fourth game Hattingh broke serve to lead 3-1.

Hattingh then held to lead 4-1 but the fight wasn’t over from de Bernardi who won two games on the trot, saved a break point, to trail Hattingh 3-4. Hattingh then broke serve to lead 5-3 and served out the ninth game to give her the set and match.

It’s been a week to remember for Hattingh. She won the title not dropping a set all week, and shocked top-seed Chanel Simmonds in the quarter-finals. Then she beat third-seeded Madrie le Roux, her doubles partner, in the semi-finals on Friday.

“Yes it’s been a real good week. I have played well, had some luck but these are the weeks you work so hard for. I’m glad I am over my injury and back in form,” said Hattingh.

The women’s doubles title was won by second seeds Agata Baranska from Poland and Stephanie Kent of USA, who were given a walkover after Madrie le Roux fell ill, and Le Roux and partner Ilze Hattingh (seeded four) were forced to withdraw from the final.

The final Futures 3 tournament will start on Monday 9 June with the finals scheduled for Friday 13 June.

Photo 2 caption: “I was hurting badly out there, and just could not play the game I normally play, and move like I normally do around the court,” said French second-seed Clothilde de Bernardi, after her straight-sets loss to Hattingh. Photo: BLD Communications.

Photo 3 caption: “Yes it’s been a real good week,” said Hattingh. “I have played well, had some luck but these are the weeks you work so hard for. I’m glad I am over my injury and back in form.”Photo: BLD Communications.