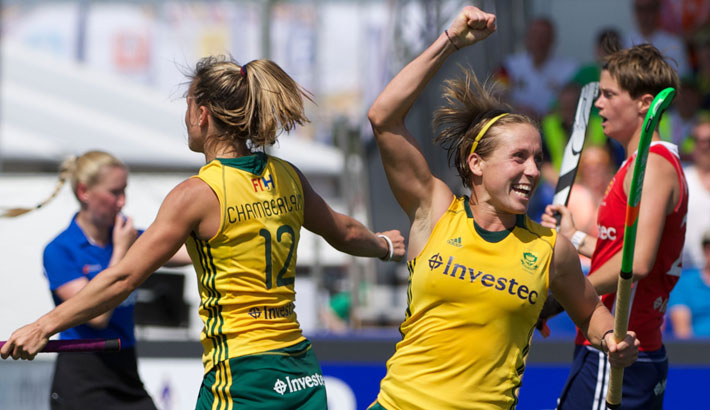 Investec SA All to Play For in China WC Tie

The South Africa women’s hockey team – who were outstanding to force an upset 4-1 beating of world no. 3 England on Friday, face another massive World Cup challenge when they tackle the planet’s seventh-ranked China at 5:30pm Sunday, in the seething cauldron of a rocking, chanting, singing capacity crowd dressed in orange at the superb Kyocera Stadium.

Click to watch the highlights of Investec South Africa’s 4-1 win over world no. 3 England, in their third FIH Rabobank Hockey World Cup 2014 tie

It was a wow moment for dynamic SA striker Sulette Damons on Friday when her 150th Test match cap came alongside the girls in green and gold’s first-ever defeat of world number three England, at one of hockey’s Majors.

Damons made up for her hamstring-enforced absence from the opening two World Cup games with a searing performance, that included the most stunning of goals in SA’s runaway 4-1 victory.

South Africa’s triumph saw superb strikes from Kathleen Taylor, the fleet-footed Damons, Shelley Russell and Dirkie Chamberlain – and was constructed around the ultimate team performance where every player made a telling contribution. The magnitude of the win left the hapless English huddled in the dugout in tears afterwards.

South Africa’s world record goalscorer and talismanic striker Pietie Coetzee (35) who was a late replacement for the unfortunate double Olympian SA defender Lenise Marais – ruled out due to a serious leg injury making participation impossible, was in top form in the unfamiliar position of right half, and her experience of scoring a scarcely-believable 280 goals in 284 Test matches has undoubtedly rubbed off on her younger team-mates in recent years.

But what’s done is done, the England drubbing is but a cherished memory, and now is the time for world number 11 SA to take on, and beat, the formidable China in Sunday’s 5.30pm bust-up.

Celebrated SA captain Marsha Cox was magnificent in the leadership role, both verbally and by example, and every ounce of her 335 Test match experience came into play against an England side that arrived at the tournament, with reason, gunning for the gold medal.

Giles Bonnet and his coaching staff are meticulous planners, and as with England, they will have devised a plan to outwit the technically superb yet somewhat robotic Chinese, whose captain Jiao-Jiao De is the lynchpin.

The SA women are now in with a chance of finishing third in Group B and with that comes the opportunity to end fifth in the World Cup placings for the first time in the country’s history.

This match, live on SuperSport, is a big ask for the SA team, but on Friday’s evidence, the questions can be answered!