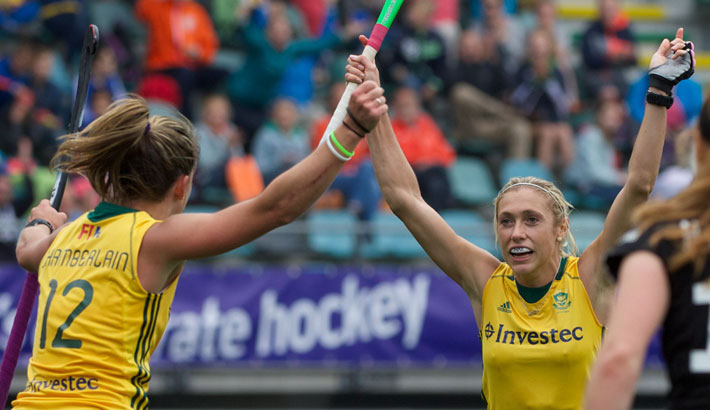 Russell the Silver Lining in 3-1 Loss to Germany

The Investec South Africa women’s hockey team lost 3-1 to Germany after trailing 1-0 at half-time in the teams’ second Group B match of Hockey World Cup 2014, at the Kyocera Stadium in The Hague, Holland, on Tuesday morning.

The Germans’ goals came from a Marie Mävers brace, and the striker was joined by team-mate Kristina Hillmann on the scoresheet while SA’s successful strike went to Shelley Russell.

“It was an exciting match with equal opportunities, a good contest, but the Germans were more clinical in the attacking third,” said SA captain Marsha Cox.

In the final analysis, the South Africans needed the presence of striker Sulette Damons, again rested due to injury, upfront.

SA assistant coach Kurt Cerfontyne said the team created far more opportunities than in the 4-1 loss to reigning World Cup champs Argentina on Sunday night. “But we have got to look at ways to create better connections in goalscoring positions.”

Cerfontyne added that SA are still looking to finish inside the top 10. There are still three Group B matches left for SA, and Cox pointed out that this is a long tournament.

“We’ve got to put this behind us, take it one game at a time, the players are fit and I don’t think it will be difficult to pick ourselves up for the next match [fusion_builder_container hundred_percent=”yes” overflow=”visible”][fusion_builder_row][fusion_builder_column type=”1_1″ background_position=”left top” background_color=”” border_size=”” border_color=”” border_style=”solid” spacing=”yes” background_image=”” background_repeat=”no-repeat” padding=”” margin_top=”0px” margin_bottom=”0px” class=”” id=”” animation_type=”” animation_speed=”0.3″ animation_direction=”left” hide_on_mobile=”no” center_content=”no” min_height=”none”][on Friday at 2.30pm against world number three England].”

SA had pulled a goal back (2-1) with six minutes left and Cox said that conceding a goal to trail by two goals once again, just a minute later, is never good. “It was crucial when we scored, only for Germany to immediately get one back.”

World number 11 South Africa started very well, making a number of quality penetrations into world number six Germany’s defensive zone, and in the 10th minute Russell shaded the wrong side of the left post with only goalkeeper and captain Kim Platten to beat.

The Germans – who drew with world number eight Korea 1-1 in their opener, came back, and Kristina Hillmann tested keeper Anelle van Deventer before the Europeans quite rightly had a goal disallowed after the ball came off an attacker’s body.

SA, like Germany, also needed points in Group B after their defeat to Argentina, and midway through the half Dirkie Chamberlain brought Platten into action again, after Bernie Coston’s powerful cross from the right.

However, the Germans opened the scoring in the 19th when Jana Teschke fired in a left-to-right diagonal ball from inside the 23-metre area, and Mävers was superb in getting a touch to leave Van Deventer with no chance (1-0).

There was encouragement when the girls in green and gold won a penalty corner in the 28th minute, but the goalscoring opportunity went astray. A number of other promising build-ups went awry, but SA kept plugging away and won a second PC, and then a third, on half-time, yet the Germans held on to their one-goal lead.

In the first 10 minutes after the changeover the battle was fought largely between the 23m lines, and when Germany were down to nine players in the 11th minute South Africa failed to score when a Russell turnover and feed right to Pietie Coetzee was not capitalised on by the world record goalscorer.

In the 50th minute Germany won their first PC, while SA had earned three at that stage, and Hillmann made it 2-0 after a goalmouth scramble. In the 64th SA pulled a goal back with a great move down the left that involved Coetzee, Coston and Chamberlain in the final plays before Russell delivered the final strike (2-1).

But the joy was brief as Germany restored their two-goal cushion a minute later (65th) when Mävers bagged a second (3-1) and SA were left to reflect on what might have been.

Main Photo Caption: Shelley Russell (right) celebrates after her field goal drew one back from Germany, as team-mate Dirkie Chamberlain rushes in to celebrate with her. Russell’s 64th minute goal brought the score line back to 2-1 in favour of the Europeans, but the world no. 6 squad replied straight away to return their 2-goal advantage. South Africa lost 3-1 in their second fixture of the Rabobank Hockey World Cup 2014 in the Hague, on Tuesday, 3 June, 2014.