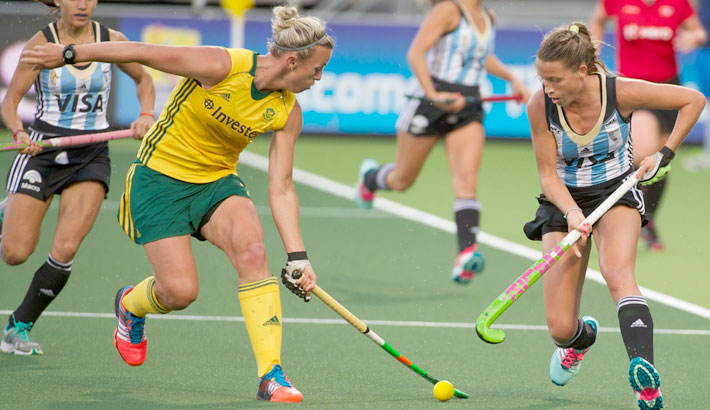 Reigning World Cup champions Argentina beat the world number 11 Investec South Africa women’s hockey team 4-1 on Sunday night in their opening Group B fixture at the Rabobank World Cup, after leading 2-0 at half-time at Kyocera Stadium in The Hague, Holland.

This match in the 2014 edition of the four-yearly showpiece saw the final scoreline reflect the world champions’ dominance, but there were enough positive moments that will encourage the girls in green and gold to look forward to Tuesday’s 10:30am second match, when they take on Germany.

SA midfielder Bernie Coston turns to avoid the defensive attention of Las Leonas’ Florencia Habif. After pressuring the world champions in the opening 20 minutes, during which neither team managed to score from tempting opportunities, the South Americans turned up the heat to easily clear their opening challengers. Photo: Stanislas Brochier

At the other end Ilse Davids hit a backhand across goal but Argentina survived the threat. SA keeper Anelle van Deventer was called into action in the fifth minute before Lisa Deetlefs made a vital intervention deep in the Argentina strike zone.

In the 23rd Kelly Madsen came close to opening the scoring with a neat flick of the wrists, but world-class keeper Belen Succi was alert to the danger.

At the other end Argentine flair brought a fifth PC in the 26th minute, from which D’Elia smashed the ball into the backboard to Van Deventer’s right, for the opening goal (1-0).

On a roll, the South Americans champs won a sixth PC, and D’Elia’s powerful shot wrong-footed Van Deventer again, for 2-0 in the 28th minute.

After the break Luciana Aymar went on an incisive run and Delfina Merino won her side’s eighth PC following a video referral, from which a slip-pass left to Noel Barrionuevo saw the corner specialist fire low into the goals, past Van Deventer’s outstretched left leg for 3-0 in the 40th minute.

Argentina brought more joy to their fans when Rebecchi fired in their fourth goal in the 60th, with a rasping shot that deflected off the keeper’s body into the net.

SA finally had their opportunity to demonstrate an ability to score, pulling one back immediately when Tarryn Bright made a superb deflection goal for a 4-1 full time score, just after the hour mark (61st minute).

Fixtures and Results for the Investec South Africa Group-Stage Matches:

Video Credit: Highlights of the opening Group B fixture for reigning world champions Argentina and South Africa, at the Rabobank FIH World Cup 2014 in the Hague, on 1 June, 2014, courtesy FIH hosted by Youtube

Photo 2 caption: SA midfielder Bernie Coston turns to avoid the defensive attention of Las Leonas’ Florencia Habif. After pressuring the world champions in the opening 20 minutes, during which neither team managed to score from tempting opportunities, the South Americans turned up the heat to easily clear their opening challengers. Photo: Stanislas Brochier