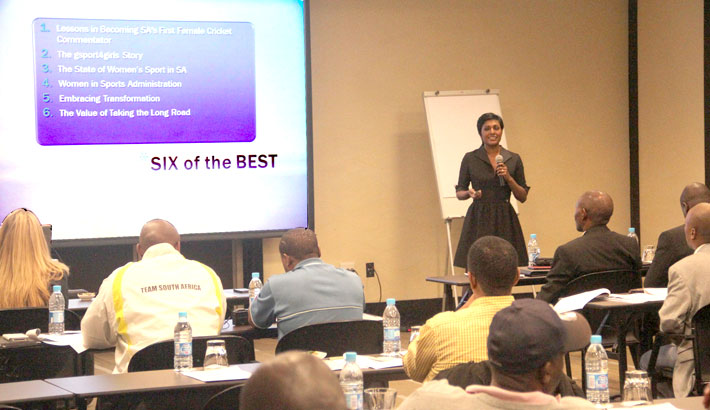 gsport Editor Kass Naidoo has urged more support for women’s sport, saying now is the time to jump into action to stay ahead of the bandwagon of women’s sport popularity currently sweeping South Africa.

Naidoo appeared as Keynote Speaker on the opening morning of the 5th Annual Sports Administration Summit, and explored the State of Women’s Sport in South Africa at the Southern Sun OR Tambo International Airport, in Johannesburg on 28 May, 2014.

Quoting recent research from Repucom SA and BMI Sportinfo, Naidoo used Netball SA’s entry into a new professional era as a case study of how women’s sport is on an upward curve.

“Netball is the number one sport among women according to the 2013 Adult Sporttrack Report by BMI Sportinfo. It has grown by 2.8% year on year over the past 10 years. All indications are that these figures are set to explode with the latest developments in the sport in terms of it going pro.”

Naidoo pointed to the early successes of the Brutal Fruit Netball Cup, a five week semi-pro league which has already boosted the profile of SA’s most popular women’s sport, and is expected to attract more supporters to the game.

According to a State of Netball report commissioned by Netball SA, BMI SportInfo noted that Netball was the only women’s sport chosen by SRSA and SASCOC as one of the top seven priority sports.

@gsport4girls Really encouraged by what you are doing for women in sport. @KassNaidoo This is an incredible initiative. Well done!

“With all the promotion of women’s sport taking place, still only one female athlete featured in the top 10 most popular sports stars in South Africa in 2013 according to BMI SportInfo. Caster Semenya features at 8. Natalie du Toit is the only other female in the top 20, featured at 14.”

Main Photo Caption: gsport Editor Kass Naidoo has urged more support for women’s sport, during her Keynote address for the 5th Annual Sports Administration Summit, at the Southern Sun OR Tambo International Airport, in Johannesburg on 28 May, 2014. Photo: gsport