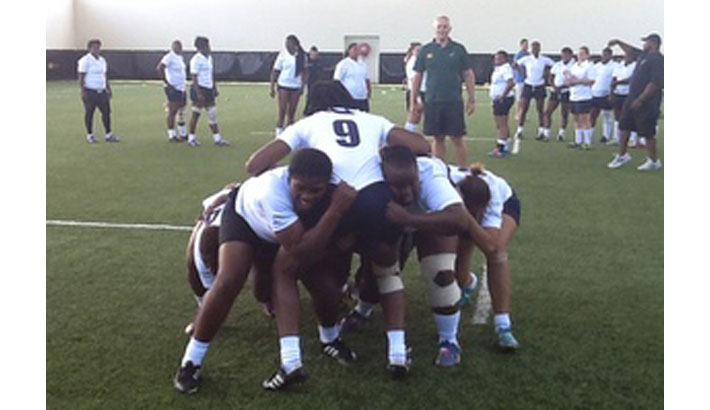 The South African Rugby Union (SARU) has awarded national contracts to 15 Springbok Women Sevens players for the first time in history in a significant move towards the 2016 Rio Olympic Games and proving its commitment to growing Women’s rugby.

The 15 are members of the elite Sevens squad based in Port Elizabeth in a programme supported by the Eastern Province’s Department of Sport, Recreation, Arts and Culture. This group includes star players Zenay Jordaan, Mathrin Simmers and Veroeshka Grain, who participated in the 2013 Rugby World Cup Sevens in Moscow as well as the 15-a-side Rugby World Cup qualifier against Uganda last season.

The contracts range from five to 12 months. “This is a watershed moment for Women’s rugby in South Africa,” said SARU CEO Jurie Roux.

“It shows that we have faith in our players and that SARU is serious about Women’s rugby. We are determined to see the ladies excel on the international stage, and by raising the level of professionalism in the women’s set-up, we believe results will follow.”

SARU was the first union to award full-time national contracts to the men’s Sevens team in the 2008/2009 season, since when the team has delivered consistent results.

Rassie Erasmus, SARU’s General Manager of High Performance, was equally excited about the decision to contract an elite group of players and he believed it would inspire more women to follow their dream of becoming professional rugby players.

“Women’s rugby worldwide has grown tremendously in the last few years and with the inclusion of Sevens rugby in the Olympic Games from 2016 we believe it will be even more popular in future,” said Erasmus.

“In line with this growth it was essential to align our structures with international standards in order to compete successfully against the best teams in the world. This is certainly a massive milestone for Women’s rugby in South Africa.”

Erasmus was equally delighted about the residential programme, which involves 16 players being housed in Port Elizabeth, as it provides an ideal environment for the players to train and bond off the field.

“The residential programme, which was introduced last year, has already started bearing fruit as the SA Select Women’s Sevens team finished as runners up in the Dubai International Invitational tournament in November last year, and hopefully the team will build on that performance this year,” said Erasmus.

“In the past our women players had to train on their own and then assemble in short camps before matches, which was not conducive to consistent quality performances. These initiatives have definitely changed the face of women’s rugby.”

Photo: Women’s sevens rugby players in practice. On Wednesday, SARU unveiled a historic moment when it announced a squad of 15 players, the first to be nationally contracted, in the buildup to South Africa’s participation in the 2016 Rio Olympic Games. Photo: SARU