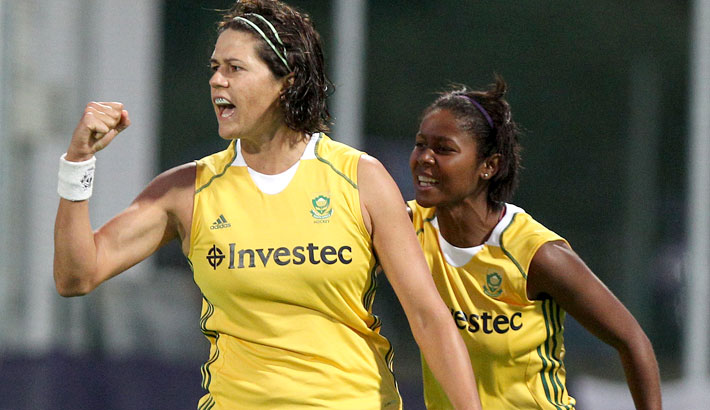 You could hardly ask for more daunting opponents than those the Investec South Africa women’s hockey team will play in their opening FIH Rabobank World Cup Group B match in the Hague on Sunday.

Captain Marsha Cox’s side take on defending World Cup champs Argentina at 7.45pm (all matches SA time, there is no time difference), at the most impressive converted 15 000-seater Kyocera Football Stadium.

In Argentina’s Las Leonas (The Lionesses) one need go no further among their team than eight-time World Player of the Year Luciana Aymar (36). Regarded as the best women’s hockey player of all time, the attacking midfielder with the incomparable dribbling skills is described as the Diego Maradona of hockey, after the Argentine football mega star.

Yet the South African camp is not fazed by the prospect, and look in relaxed mood, determined to give a good account of themselves. With no major injury concerns, the senior women’s hockey team is relishing the opportunity to get their World Cup under way.

Whatever the results, if the world number 11 SA women can defend with accuracy in open play and at set-pieces for the full 70 minutes while capitalising on their strengths when going forward – and, crucially, don’t give away too much ball through unforced errors – they will come off the pitch at match end with a feeling of accomplishment for what lies ahead.

In late good news for the Investec SA squad, the team’s world record goalscorer, the legendary Pietie Coetzee, has made a surprise return to the Investec South Africa women’s hockey team.

Due to pressing work commitments – and in archetypal low-key fashion, superstar Coetzee – scorer of a phenomenal 280 goals in 281 Test matches, had made a quiet early exit from the World Cup reckoning for the four-yearly showpiece that begins on Sunday following a injury-forced withdrawal of double Olympian Lenise Marais.

Going into her fourth World Cup odyssey, which began in Utrecht here in Holland in 1998, Coetzee said before late afternoon training Thursday that her participation was a pleasant surprise but it was unfortunate to come following Marais’ sad news.

Into her fourth World Cup, Cox – like Coetzee – is a triple Olympian and an icon in South African hockey and women’s sport. The leader said this World Cup is an even more exciting prospect now than ever before in a career that began in 2001.

“It’s even more special in that the men’s tournament is taking place at the same time and at the same venue,” said Cox, now a resident of Amsterdam married to The Netherlands assistant coach, Alexander Cox.

SA head coach Giles Bonnet said he is happy with the team’s preparations: “We are just busy with the details now, the small things, prepping for our first match on Sunday and looking forward to it.”