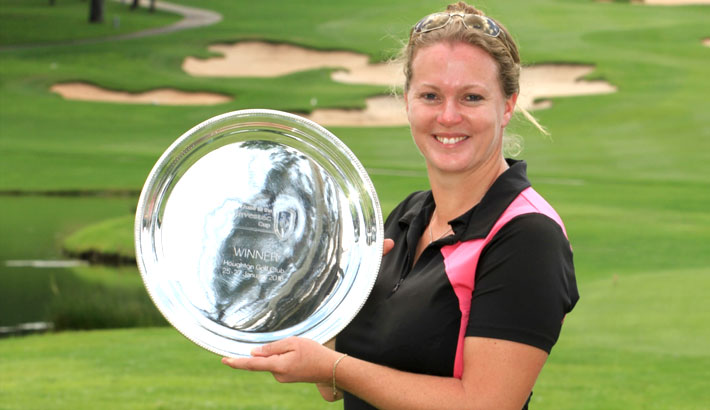 Rebecca Hudson frequently pulls out her seven-wood against the long hitters on the Ladies European Tour. Little wonder then that the Englishwoman relied on her trusty companion to guarantee her victory in the Chase to the Investec Cup at Houghton Golf Club on Wednesday.

Needing par at the closing hole to win, Hudson’s well-loved club got her safely on the green in two. She lagged a 60 foot putt very close and became the first international Sunshine Ladies Tour winner since the Tour launched in 2014 when she tidied up for an even-par 72.

A four-time Ladies European Tour champion and former SA Women’s Open winner, Hudson was quite emotional after defeating local hopes Stacy Bregman and Ashleigh Simon by one stroke a winning score of four-under-par 212.

“I’m just glad that I didn’t know I would become the first international winner before I hit that first putt, because it never would have come out so well,” Hudson said.

“I used to come out to South Africa all the time and I was really disappointed when the Tour disbanded some years ago. When I heard about the new Sunshine Ladies Tour last year, I came out and I knew I would be back this year.

“I regret not playing more events last year and not staying for the final event, because this is such a fantastic Tour for us to start the season. The standard is high, the events are very well organised and we play top golf courses.

“This year I’m playing to get into the top 10 for the final event. I want a shot at the R1-million and I want to give Lee-Anne (Pace) and the other local players a run for their money at Millvale.”

Hudson started the final round in the lead at four under after earlier rounds of 71 and 69. The 36-year-old Wheatley golfer had a one shot cushion over Swiss amateur Azelia Meichtry, had a two stroke lead over Simon and started three shots ahead of Bregman.

“I haven’t been in contention for some time and I don’t mind to admit that I was pretty terrified before we started,” said Hudson.

She mixed bogeys at four, eight, 13 and 17 with birdies at five, seven, 14 and 15 and, although she came under attack from Meichtry and the SA pair, Hudson never relinquished the lead.

“The greens were tricky and I think we all battled a bit today,” Hudson said.

“On some holes, the ball would veer right or left just before the hole. You allow a little at the next hole and the putt goes dead straight. I hit it close at 13 and told the girls I’d finish, but I missed a tap-in putt for par… I was just happy that no cameramen filmed that embarrassing moment.”

Bregman and Simon turned up the heat over the closing holes when Bregman birdied 15 and 17 to tie Hudson at four under and Simon moved to three under with a birdie at 15.

“I knew needed pars at the last two holes, but the nerves got to me at 17,” Hudson said.

“I hit my approach in the greenside bunker and couldn’t up and down. Stacy was up ahead on 18 and reached the green in two and I definitely felt the pressure coming down the 18th fairway.

“When I saw her toss her ball away, I figured she didn’t birdie to take the outright lead. I pulled out the seven-wood to get on the green and it didn’t fail me. Then I heard that Stacy dropped at 18. It was a relief to know I had two putts to win.

“It feels brilliant to lift a trophy again. Last year Kirsty Fisher, who also competes on the Ladies European Tour, travelled with me to South Africa. She couldn’t come out earlier, but it’s going to be a lot of fun to shove this lovely silver plate under her nose when she gets here on Friday. She has some catching up to do.”

Final Results of the Chase to the Investec Cup at the Houghton Golf Club on Wednesday, 27 January, 2016:

Photo 1 caption: Chase to the Investec Cup for Ladies champion Rebecca Hudson (England) pictured on the course during day 3 of the Sunshine Ldies Tour’s third summer event. Interviewed after winning, Hudson said: “I’m just glad that I didn’t know I would become the first international winner before I hit that first putt, because it never would have come out so well!” Photo: Luke Walker/Sunshine Tour/Gallo Images

Photo 2 caption: A three-under par Round 1 placed top SA golfer Ashleigh Simon in the overnight leader position as the tournament kicked off, but a tough day 2 meant that her third round 1-under par finish put her just out of reach of this year’s silverware. Photo: Luke Walker/Sunshine Tour/Gallo Images

Photo 4 caption: South African amateur Ivanna Samu’s five-over par 221 card saw her finish as the Chase to the Investec Cup for Ladies’ top amateur alongside Switzerland’s Azelia Meichtry, but she will be disappointed with her final round 76 which cost her a better finish. Photo: Luke Walker/Sunshine Tour/Gallo Images