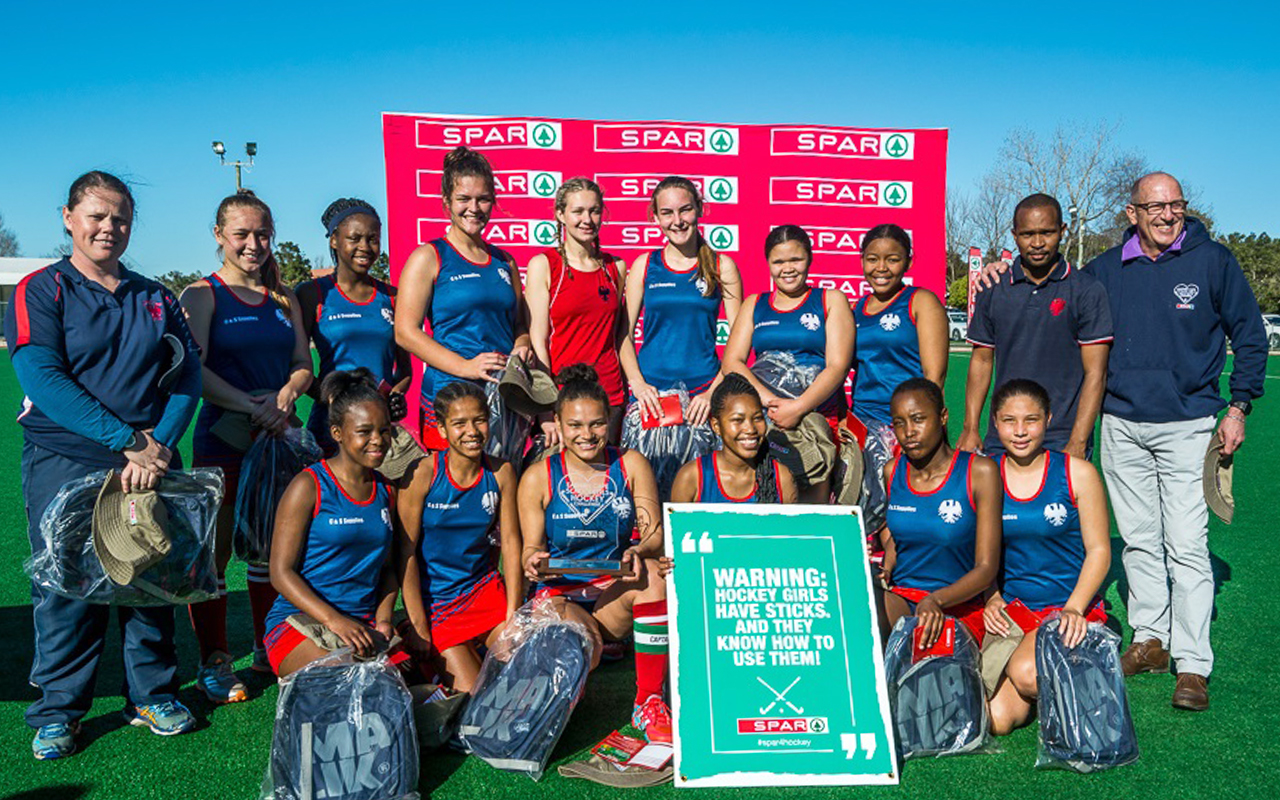 Hudson Park emerged as the latest champions in the SPAR Eastern Cape Schoolgirls Hockey Challenge when they defeated Alexander Road in the provincial finals at Woodridge, near Port Elizabeth, on Saturday.

In a tense and well-contested encounter, the East London side overcame their Port Elizabeth rivals 1-0, with a goal by Tayla Jade Marais in the third minute of the game deciding the issue.

“We wanted to make a good start and fortunately we managed to get on a roll [opening with a 5-0 win over York) and we finished off on a high.” – Hudson Park team manager Rosanne De’ath

Both sides had chances thereafter, but neither team were able to find the net and Hudson claimed their first title in the 30-minute final.

It completed a successful year for the school, who also qualified for the inaugural provincial finals in 2016, ending as runners-up.

In May, Hudson defeated 2017 provincial champions Clarendon to win the East London Coastal tournament and on Saturday they were unbeaten in the round-robin phase of the finals.

They beat Alexander Road 1-0 in the round-robin and confirmed their status as the top side in the final.

Hudson Park team manager Rosanne De’ath said it had been another wonderful tournament, to which they had been fully committed.

“The girls are well drilled and we are always prepared for any situation we face.” – Rosanne De’ath

“We have had a fantastic time and we are really grateful to SPAR for the exposure this tournament gives us,” she said.

“It gets our hockey to a good level early in the year, and we have played against a number of teams during the tournament that we would not normally face.”

She said they had entered the provincial finals with a plan to take the title.

“We are lucky to have a very good coach in Jerry Snyman, who sets out a game-plan but is also able to change that if necessary.

For some players, such as Hudson Park captain Zimkhitha Weston, this was their final SPAR tournament as they are in matric. Weston paid tribute to the sponsors at the prize-giving.

“I want to thank all the girls who played because you guys are fantastic players. I am also really proud of my team.” Hudson captain Zimkhitha Weston

“Thank you to SPAR for being such great sponsors for schoolgirls’ hockey,” continued Weston. “Thank you everyone, and I am going to miss you next year.”

SPAR EC sponsorship and events manager Alan Stapleton confirmed that the tournament was here to stay. “We are definitely going to carry on with this sponsorship, because it is one of our favourite events,” he said.

“From SPAR’s point of view this tournament ties in with all our values of family, fun, friendship and a healthy lifestyle.”

“All you players make it very special. There is very keen competition, but also a lot of camaraderie and friendship. As a sponsor what more could we ask for?” – SPAR EC sponsorship and events manager Alan Stapleton

He also acknowledged the role of national tournament director Les Galloway, of Durban, who initiated the tournament with the KwaZulu-Natal edition eight years ago.

“This was Les’s brainchild and she went to SPAR head office to set the wheels in motion and she makes sure that it all happens.

“We want to thank Woodridge and Maxime Bird and her team for pulling out all the stops to make sure the venue was ready after the heavy rain we had on Friday.”

He added that they appreciated the commitment the teams had shown during the year.

“To all the teams who have travelled during the year we want to say well done. We want this competition to be on the highest level and to have the best teams here, so it’s great to have that commitment.

“For all the matrics, this is your last hockey event playing with your friends and we hope you take away with you many special memories from the SPAR tournaments.”