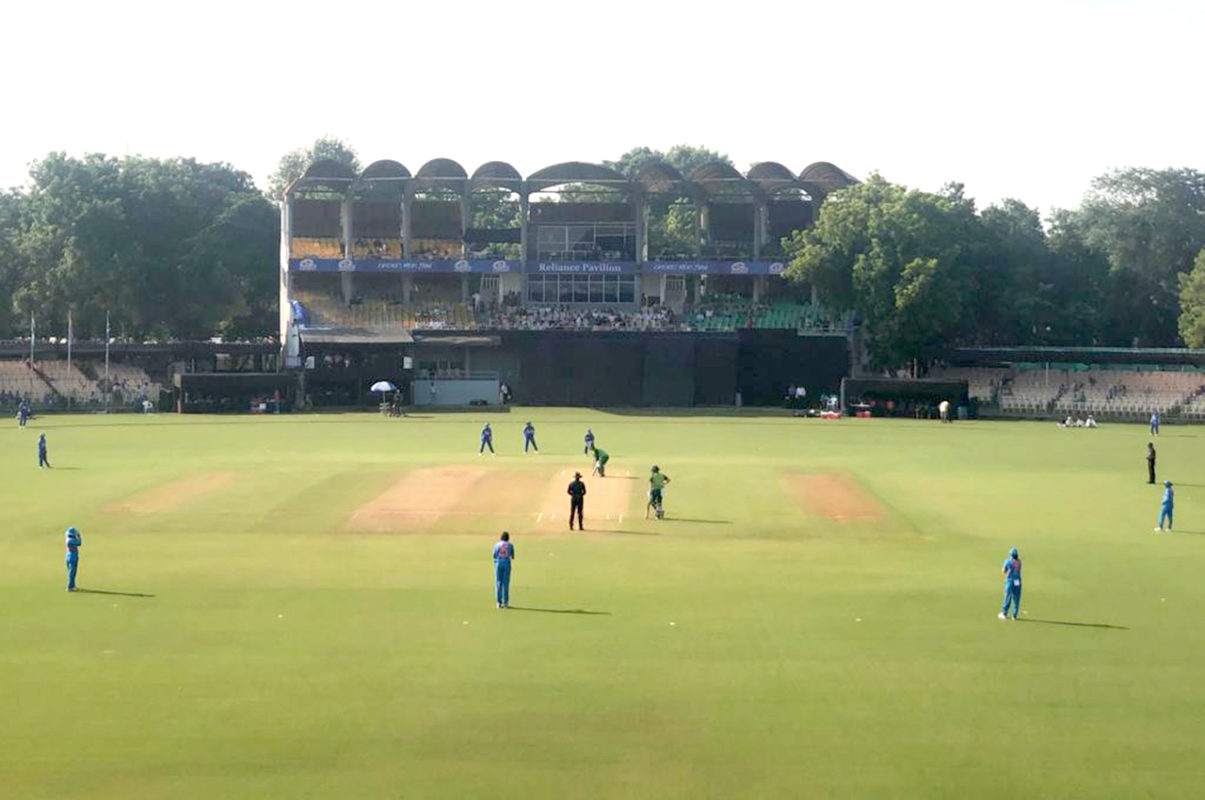 India have secured their highest successful run chase in ODI cricket as they hunted down 248 to win the second ODI against South Africa in Baroda, and secure the three-match series with one match to go. Captain Mithali Raj top-scored with 66 as she put on 129 for the third wicket with Punam Raut (65) to set up her team’s impressive victory.

Having lost the toss and being put in to bat first, many thought that South Africa had done enough after posting 247/6 to look for a win and level the series 1-all (Scroll down to read the details of the Proteas Women batting innings).

LISTEN IN: Kass Naidoo reviews the Proteas Women’s performance in the second ODI in Baroda, India, on Friday, 11 October

South Africa had a big setback early on a the start of India’s reply, when Shabnim Ismail limped off the field, leaving them a bowler short.

Jemimah Rodrigues and Priya Punia got India off to a good start before Ayabonga Khaka held on to a brilliant return catch in the 9th over to dismiss Rodrigues for 18 off 24, who at that stage had scored all four off India’s boundaries.

Punia took advantage of some wayward bowling as she then picked three fours off Khaka as Indian raced past 50. This prompted a change as spinner Nondumiso Shangase was brought into the attack.

By the 12th over, South Africa had conceded 22 wides and India had the momentum on 66/1.

Ismail returned to the field and was brought back into the attack as SA looked to curtail the flow of runs.

She struck immediately as the dangerous Punia was caught by Laura Wolvaardt for 20 off 42 balls to end a troubling partnership of 32.

Captain Mithali Raj got together with Punam Raut and kept the scoreboard ticking.

India reached 86/2 by the 18th over. At the same stage, SA were 79/1. They needed wickets to keep up the pressure but Raj and Raut were up to the task, bringing up the team’s 100 in the 21st over and carving a few more boundaries for good measure.

With the score on 109/2 and India looking ominous, Suné Luus turned to Marizanne Kapp to see if she can get the much-needed breakthrough. She conceded just two runs but runs continued to flow from the other end as Raj used her feet to perfection, hitting Shangase back over her head for four.

She then powered another four through the offside to bring up the 50 run partnership with Raut, and India were coasting on 122/2 after 23 overs.

Khaka was brought back into the attack in the 25th over after her opening spell of three overs went for 33 runs as Luus rung the changes in search of a wicket.

Pressure On but Batters Continue to Strike

A couple of quieter overs ensued but India kept wickets intact and by the second drinks break, Raj and Raut had grown their partnership to 72 off 95 balls.

Raj brought up her 53rd half century in the 31st over and her team mates applauded while she raised her bat to the pavilion.

With Raj on 55 and Raut on 40, India were cruising towards the victory target of 248 with 18 overs to go. In the next over, Raj powered the ball over extra cover to bring up the 100 partnership between her and Raut.

Marizanne Kapp re-entered the attack with 17 overs to go, having gone for just 6 runs in her five overs, but even she couldn’t break this stubborn partnership as Raj and Raut eyed the finish line.

Raut found the gap on the leg side for four as she reached 49. She completed her 12th half century with a single off Ismail in the 35th over much to the delight of her captain out in the middle and her team mates in the dressing room.

Once she reached the milestone and despite struggling with cramps, Raut opened up and went for her shots.

The Captain Falls but the Ship Sails On

As India edged towards 200, Kapp struck as Raj holed out for 66 to deep cover where Wolvaardt steadied herself to take a good catch.

Khaka then struck to remove Raut, caught low down by Kapp at short fine leg for 65 off 92. This brought Harmanpreet Kaur to the crease, with 53 needed from 62 deliveries.

India brought up 200 in the 42nd over, by which time SA ensured the required run rate was up to six an over.

Kaur took three boundaries off Ismail in the 43rd over to ease the pressure and bring the asking rate down – 36 needed off 42 balls.

In the next over, Khaka cleaned up Sharma for 2, and India found themselves five wickets down, still needing 36 from 41 balls.

But the writing was on the wall when Kaur smashed India’s first six of the match, leaving India just 16 runs for win from 28 balls, and despite a few more jitters, India chased down the target with two overs to spare.

Kaur was belligerent in her unbeaten 38 off 26, including five fours and one six.

South Africa Started the Day in the Best Way

Earlier, South Africa posted a competitive 247/6 to give themselves the best chance of squaring the series.

India had won the toss and put South Africa in to bat. The home side were a little wayward upfront, bowling four wides in the first three overs. Laura Wolvaardt was also put down in the slips when she was on 5, albeit a tough chance.

But the dynamic opener didn’t let that get to her as she and Lizelle Lee got the Proteas Women off to a patient start, running well between the wickets, rotating strike and putting away the bad ball, as they added 46 in the first 10 overs.

Lee brought up SA’s 50 with a big six over deep mid on as the innings gained momentum, for the team’s first 50-run partnership stand in nine matches.

South Africa were much more confident against the spinners who were denied the advantage they were afforded in the first game.

The duo put on 76 for the first wicket before Lee was caught by Harmanpreet Kaur off the bowling of Poonam Yadav for 40 off 54 balls, including three fours and one six. It was the highest opening stand by a visiting team vs India in the last four years.

With the spinners not as successful as the first match, Jhulan Goswami was brought back in the 23rd over as India searched for the breakthrough, but SA continued to attack.

They started picking up the pace, with good rotation of strike after the spinners slowed down the scoring rate following Lee’s dismissal.

The 100 came up in the 24th over with just one wicket down and an opportunity for the visitors to post a competitive total with good batting to come.

Wolvaardt was resolute, as she brought up her 15th half century in ODI cricket and  started playing with freedom as both her and Chetty put pressure on the fielders, turning ones into twos and offering very little to India’s tiring bowlers.

Wolvaardt’s confidence rubbed off on Chetty as she eased into her innings, with the pair adding 50 off 84 for the second wicket as South Africa strung together back to back 50 run partnerships.

It was the eighth time South Africa made 50+ stands for the first two wickets in an ODI innings but soon after, Chetty was out on the stroke of 30 overs, for 22 off 42 balls.

A Goodall Breath of Fresh Air

A short while later, Wolvaardt went for a big six and was well-caught on the boundary for 69 off 98 balls, her wicket bringing Lara Goodall to the crease, in the side on Friday for Nadine de Klerk.

Goodall brought up SA’s 150 with a four down the ground as SA looked to accelerate the pace, as she and Mignon du Preez took advantage of big gaps in the field between tiring fielders, mixing aggression with smart cricket to bring up the third 50 partnership of the SA innings.

When Goodall was eventually out for 38 off 32 deliveries in the 43rd over, shortly after SA reached 200, du Preez took over the aggressor role, carrying on the momentum from that excellent half-century stand with Goodall.

She combined with Suné Luus, eyeing a score in excess of 250.

Just when her partnership with Luus was flourishing, her captain perished, caught down the leg side off Yadav for 12, bringing the fearless Marizanne Kapp to the crease.

Bhatia put down a sharp chance off Goswami as du Preez got a reprieve on 32 in the 47th over.

Du Preez survived after another dropped catch in the deep by Punam Raut off Bisht in the 48th over, and in the next over, the diminutive batter smashes Goswami for a huge six down the ground – SA’s second of the innings as they went past 240.

She was eventually out for a well-played 44 off 48 deliveries in the final over as South Africa ended on 247/6, an impressive effort from a collective effort with the bat.

Photo 1 Caption: Lizelle Lee and Laura Wolvaardt seemingly put South Africa in the pound seat after their 76-run partnership inspired an unencumbered 247-6 after India won the toss and put South Africa in to bat, but Indian skipper Mithali Raj played a captain’s innings to take her side to the victory with a series win included, without. Photo: gsport

Photo 2 Caption: South African bowlers will rue the 27 extras conceded during India’s reply, a heavy setback for the visitors without contending with strike bowler Ismail Shabnim having to leave the field for treatment early on. Photo: gsport

Photo 3 Caption: The day had to belong to Indian skipper Mithali Raj, who was unruffled in India’s chase after the home side’s losses of firebrand openers Priya Punia and Jemimah Rodrigues. Photo: gsport