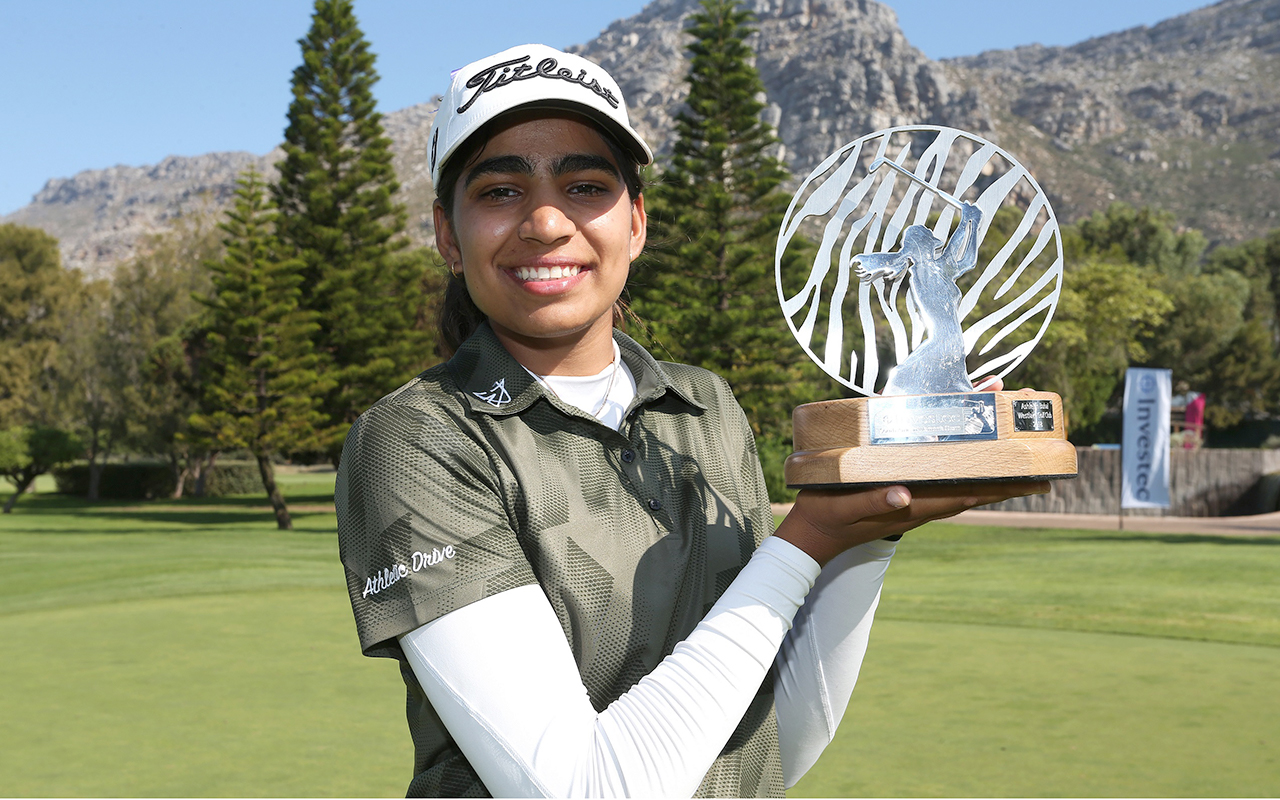 The 19-year-old left-hander from New Delhi tapped in for par at the final hole for a three-under-par 69 to edge out former three-time champion Lee-Anne Pace by a stroke.

For most of the final round, the tournament was Pace’s to lose as the nine-time LET champion looked in complete control in front of a vocal home crowd.

She held a three-stroke lead through 12 holes, but a surprise bogey on the par-five 13th cut her advantage to two shots. Dagar, who fired her first birdie at the par-four eighth, made her second at the short 15th to pull within a shot of Pace.

The Indian teenager’s approach at the par-four 16th landed just short of the green, but a precision chip dropped in the hole for a share of the lead.

She headed down 18 with a one stroke lead after Pace let another one slip at 17.

“I really didn’t expect to win, but it happened and I am very happy,” said the hearing impaired Dagar.

“I got two lucky breaks towards the end, with a long birdie putt on 15 and then the chip-in on 16. Normally I would just try to chip it close and make the par putt, but this time I had a feeling I could do it and it went in.”

Coming off a tie for fifth in last week’s Women’s New South Wales Open in Australia, Dagar got her tournament off to a nervous start with two double bogeys in the first three holes and signed for an opening round of four-over-par 76.

A flawless second round 66 propelled her into the leading group and a second consecutive bogey-free round was enough for the former World Deaf Championship winner and a silver medallist in the 2017 Summer Deaflympics to claim her breakthrough.

Victory came with a massive boost to fourth in the LET Order of Merit and the top spot in the LET Rookie of Year Race, but the teenager is keeping her feet on the ground for now. “My goal for the rest of the season is to just stay focused and take each tournament as it comes,” she said.

Cheryl Leicher: Head of Marketing Investec Property, was thrilled to see the young starlet rise to the occasion.

“Congratulations to Diksha on claiming this year’s Investec South African Women’s Open title,” said Leicher. “For the last five years, Investec Property has proudly supported women’s golf, through the sponsorship of this LET co-sanctioned tournament, our individual sponsorships and our support of the Sunshine Ladies Tour.

“These powerful partnerships allow us to grow the sport of golf for women in South Africa.”

While bitterly disappointed, Pace was gracious in defeat. “Diksha played great and didn’t make a mistake the whole day,” she said.

“I knew that I had to make birdies to win and unfortunately I left one short at 16 and then missed a par putt at 17.

“I’m not too disappointed because I played great golf, but I made two mistakes and they cost me the tournament.” – Runner-Up, Lee-Anne Pace

Despite it being her best finish in her short professional career, Henseleit was left mixed emotions after a bogey at the last dropped her to third.

“At the moment I’m a bit disappointed,” she lamented. “I needed a birdie at the last and I made bogey, so that was frustrating. In time I will look back and be quite happy about finishing third. I hit so many good iron shots but the putts just didn’t drop today. It wasn’t my day.”

The 18-year-old Randpark golfer carded rounds of 73, 76 and 74. A joint 30th finish lifted Mistry to second in the Investec Property Fund Order of Merit.

With editing from gsport