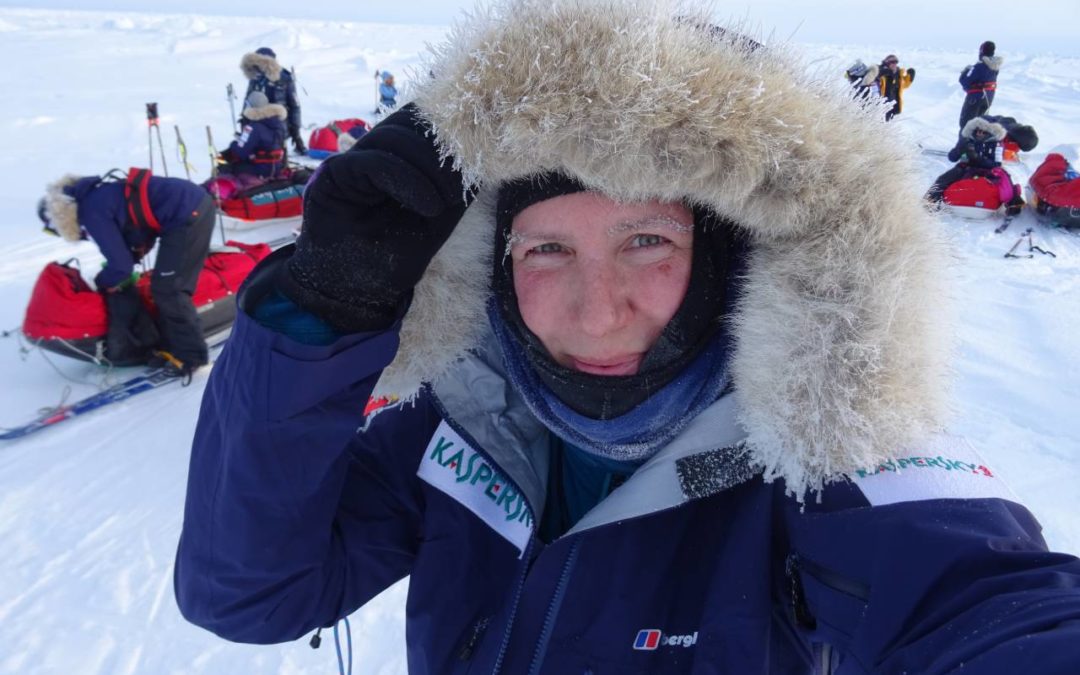 Felicity Aston MBE, is a British polar explorer and Antarctic scientist turned author, speaker and expedition leader who is hoping to leave a valuable legacy that will inspire the next generation.

20 years ago, Aston’s career began when she travelled to the Antarctic for the first time with the British Antarctic Survey as a Meteorologist.

She spent two and a half years at Rothera Research Station on the Antarctic Peninsula to monitor climate and ozone.

Aston then went on to organise and lead numerous expeditions to remote places around the world, but particularly to the Polar Regions.

Her Kaspersky Lab Commonwealth Antarctic Expedition was the first to ‘Tweet to the Pole’ and material from her Pole of Cold expedition has been developed into a travelling art exhibition.

She has written three books – her first was a finalist in the Banff Mountain Festival Book Competition – and regularly produces articles for various publications in the UK and abroad.

When not on expedition, she works with a number of expedition-related organisations, sitting on the Council of the Young Explorers Trust and the Royal Geographical Society as well as acting as an ambassador for two inspiring charities – The British Antarctic Monument Trust and Equal Adventure.

In 2015, she was awarded The Queen’s Polar Medal and was appointed MBE for services to polar exploration.

Speaking with the gsport Team, Aston reflects on her journey into the Guinness World Records book and shares advice to aspiring Polar explorers

Covid-19 has forced many to pivot this year. What have you had to do differently this year?

No expeditions have been possible this year, so I have turned my attention to planning new projects for the future and thinking of ways in which I can do things differently than before – as well as finding adventures that are closer to home.

In 2012 you became the first woman to ski alone across Antarctica, giving you a place in the book of Guinness World Records. How did this milestone shape your career?

I still don’t view what I do as a career but rather as a series of projects. Over the years I have learnt to make sure I take my time after each expedition to finish the broader project properly before moving on to the next one. I have also learned to think carefully before committing to a new project because each one often requires two or three years of my life – so I have to be sure that the project is something that will inspire me even after all of that time.

Each expedition I take on is, to me, something more challenging than the last but that doesn’t necessarily mean each journey must be longer or more physically difficult. Sometimes the challenge lays in the make up of the team or the complexity of the journey rather than just the number of miles or the number of days.

When you started your polar career in 2000, what was your ambition, and how did you navigate the early days?

When I arrived in Antarctica for the first time in 2000 I was completely captivated by the polar environment and it has been my continued curiosity to explore the polar regions that has been the motivation for most of the decisions I have made in life ever since.

“In the early days I used to worry that I should be following a more conventional path, seeking a professional career or committing to academia.” – British explorer and former climate scientist

In the early days I used to worry that I should be following a more conventional path, seeking a professional career or committing to academia. I didn’t know where my next pay-check was coming from or how I was going to support myself. But with time I became more confident that work would come, opportunities would arise and that I would find a way – even if I didn’t know in advance exactly what that would look like. Now, of course, I can’t imagine myself ever doing anything else and what I once saw as uncertainty and vulnerability I now recognise as freedom!

In 2018, you undertook an expedition involving women from around the world. Now, you have a book out detailing the incredible Women’s Euro/Arabian North Pole Expedition 2018. Tell us about the book.

The book tells the story of our expedition to the North Pole in the words of the team members themselves so that you read about the journey from multiple perspectives all at once. It is an ambitious way to write a book but provides a full 360-degree narrative that I’ve not seen before. It feels exciting and new. Not only does the book and the way we’ve written it reflect the multi-cultural nature of our team that made the expedition so special, but it also provides some much-needed diversity to the voices of polar literature.

Looking back at the courageous expeditions you have undertaken over the years, what stands out for you?

Every expedition has been uniquely striking. Getting to know the polar landscape has been a privilege I am forever grateful for but also getting to know those I have travelled with has given me an equally precious insight of the human condition. We humans are flawed but I don’t think we often enough acknowledge how beautifully brilliant we are too. I have seen such compassion and courage, genius and inspiration that I have endless faith in the potential of our species. When we pull out the best of ourselves, we are incredible beings.

What are some of the biggest lessons polar exploring has taught you?

That the amount of progress made in a day is not as important as making some progress each and every day. I sum up this philosophy of perseverance in a motto that I have carried with me ever since crossing Antarctica alone. The motto is, ‘Just keep getting out of the tent’ and I have found it remarkably useful in all sorts of situations!

What are the women in sport who inspire you and why?

“Her sport was very different to mine but the trials she described in making her dreams come true felt very similar to my own experiences. Her story gave me hope that there was light, and reward, at the end of all that hard work and effort.” – Aston speaks about drawing inspiration from Ellen MacArthur’s book titled, ‘Taking on the World’.

While I was struggling to pull together plans for my very first independent polar expedition, I read a book called ‘Taking on the World’ by Ellen MacArthur, the famous record-breaking round the world sailor. Her sport was very different to mine but the trials she described in making her dreams come true felt very similar to my own experiences. Her story gave me hope that there was light, and reward, at the end of all that hard work and effort.

What is the one thing you are really good at that nobody really asks you about?

I love telling a good story, especially funny ones. In another life I think I could have been a great stand-up comedian! Luckily, I often get to give talks about my expeditions, and it is something I love doing, particularly if it is a speaking tour when I get a little bit longer to share with the audience. There is something really special about sharing experiences in person like that.

What is your advice to aspiring Polar explorers?

Make a start. Procrastination is your worst enemy and it is very easy to convince yourself that it would be better to wait until some imagined set of criteria or circumstance are fulfilled. The truth is that there is never a good or best time to make something happen. The only regret anyone ever has is that they didn’t start sooner. So make a start, however small towards your goal today!

Each year there is a window of less than a month when it is possible to ski on the frozen Arctic Ocean and reach the North Pole over sea ice. For the last two years it has not been possible for any ski expeditions to get to the North Pole during this very short window of time. So, my hope for 2021 is that I will be able to reach the sea ice of the Arctic Ocean again.

To leave something behind that is of value to the world.

Author of Call of the White, Alone in Antarctica and Chasing Winter