Tennis South Africa announced that they would be bringing two weeks of international tennis back to Potchefstroom, in the North West Province in December. The tennis body has partnered with the North West University PUKKE to host two Futures tournaments back-to-back from 3-16 December.

The women’s tournament will feature a singles and doubles draw, and will be played at the Riaan Venter Tennis Academy on the NWU PUKKE Campus.

There will be a qualifying tournament before each event, which will no doubt be of big attraction to local players who will be able to sign in and hopefully qualify for the international tournaments “on their doorstep” so to speak, with the tournament boasting a prize money of R100 000.00 for the women.

Ian Smith, CEO of Tennis South Africa, said that it was of utmost importance for TSA to host events around the country. “Futures tournaments play a vital role in the development of aspiring professionals. It’s the first stage for the top players to play and earn points which will improve their international rankings and take them to the next level of the pro game.”

Smith said that the people of the North West can expect some top class tennis action. “It’s common knowledge that to make it as a pro you have to work hard and play hard to earn your break. There are so many hopefuls who are so talented at the Futures level, and the competition is really tough so the players really put on their best to crack that break.”

“It is a privilege to be the host of these prestigious events,” said James Stoffberg, Director of NWU-PUKSPORT. “I believe that the players will find our facilities and organisation first class which will ensure that their stay in Potchefstroom will be enjoyable and of value in their own personal development.”

Live Scoring will be provided by Altech, and will be available from the qualifying rounds at the Tennis South Africa website. 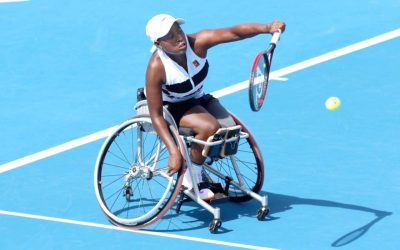