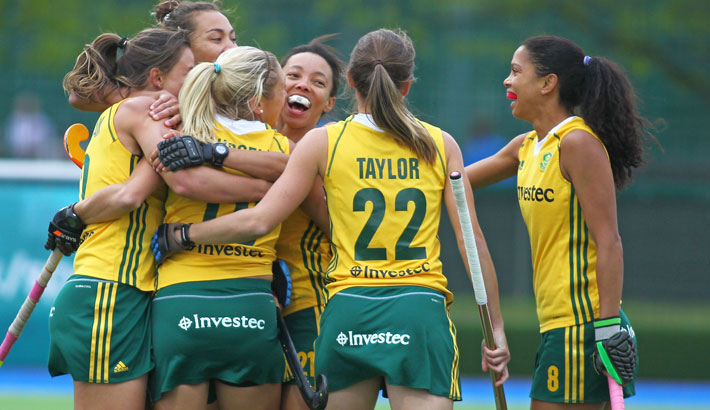 by the International Hockey Federation | May 2, 2014

South Africa started both halves of their quarter-final match against Scotland in dominant fashion, leaving Scotland chasing the game after Shelley Russell opened Investec South Africa’s account within one minute of the start of the game, saying later that this had very much been the game plan.

Speaking afterwards, Player of the Match Russell said: “We spoke about the need to start well and that was our focus for this game. We are ecstatic about winning and can’t wait for the semi-finals against Ireland.”

However, having made such a sparkling start, South Africa then appeared to lose their structure and much of the half was spent with Scotland creating attacks, particularly on the right-hand side of the pitch, with South Africa breaking down play, but not really starting any attacks of their own.

Scotland’s Vikki Bunce and Alison Bell were particularly energetic in midfield, keeping the experienced duo of Tarryn Bright and Marsha Cox under constant pressure, and preventing them from controlling the centre of the pitch.

Also having a fantastic game was the hosts’ goalkeeper Amy Gibson, who celebrated her 50th cap with an impressive performance in goal.

In the second half, South Africa again came out fast with Russell (38′) scoring her second of the game. The match flowed across the pitch and both teams showed a fair measure of aggression as Scotland tried to work the ball into the South Africa circle and the team in yellow looked for a third goal.

While South Africa were the more clinical in their finishing, and players like Cox and Russell were able to show their class, there was very little between the two teams in the build-up play.

Both sides were quick to put the ball carrier under pressure, but both teams also made some basic errors, particularly when it came to the final attacking moves.

With just seven minutes on the clock, Scotland stormed back into the came when captain Linda Clement (64′) hit the bar and Emily McGuire reacted quickest to tap the ball over the line. Scotland piled on the pressure and South Africa started to let panic seep into their game.

Fortunately for the team ranked 12th in the world, time was on their side and so they will face Ireland in the semi-finals, while Scotland face a match against Korea.

Photo caption: Shelley Russell, scorer of both South Africa’s goals in the green and gold’s 2-1 win over Scotland in the quarter-finals of the Champions Challenge in Glasgow Thursday night, takes on Rebecca Ward along the right touchline. Photo: Rodrigo Jaramillo