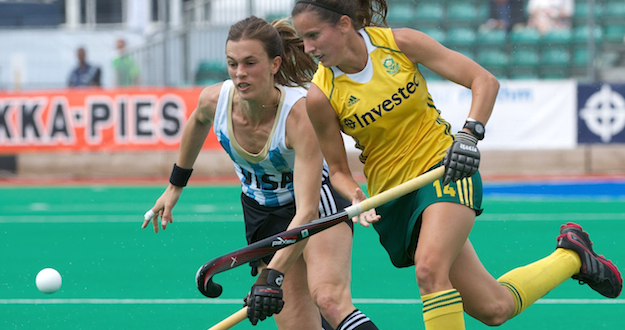 Argentina won 3-1, the London 2012 Olympic Games silver medallists having led 1-0 at half-time. They opened the scoring with a Silvina D’Elia penalty corner in the 19th minute. SA equalised in the 47th minute effort with world record goalscorer Pietie Coetzee’s 275th goal – in 271 Test matches, which followed a skirmish in the Argentina goalmouth.

At 1-1 the game had opened up in South Africa’s favour and they dominated for considerable periods, but were unable to convert chances they created, and in the 53rd minute the reigning World Cup champions took the lead again when D’Elia nailed her second penalty corner goal.

With SA pushing hard for the equaliser as time ran out, the ever-dangerous Rosario Luchetti was able to evade outstanding SA goalkeeper Sanani Mangisa in the 68th minute, just two minutes from full-time.

While Argentina dominated in the penalty corner facet of the match, SA head coach Bonnet said his side could have gone 3-1 up had the “two huge opportunities” been taken.

“We knew we would create those opportunities, but we need to take them,” said Bonnet. “What is missing is that at the right moment we need to convert those chances.”

SA did what they needed to do to win the match, Argentina finding it hard in the second half to break out of defence. Australia, the world number six, who edged South Africa 1-0 in the Pool B match, had also struggled at times in shaking off the SA pressure.

“If you look at Argentina’s goal shots, apart from the last three minutes, we matched them, and this is the second-ranked team in the world,” said Bonnet, who added, though, that SA did not start well.

Bonnet said that South Africa’s young players have enormous respect for Argentina and that might have contributed to a lukewarm first half. “We had to start with the same impact as in the second half, and as we did against Australia.

SA are likely to play world number 17 Italy at 11 am SA time Saturday.

The South Africans are almost certain to qualify for the World Cup in The Netherlands in June next year, when they compete in the Africa Cup in early October in Kenya.