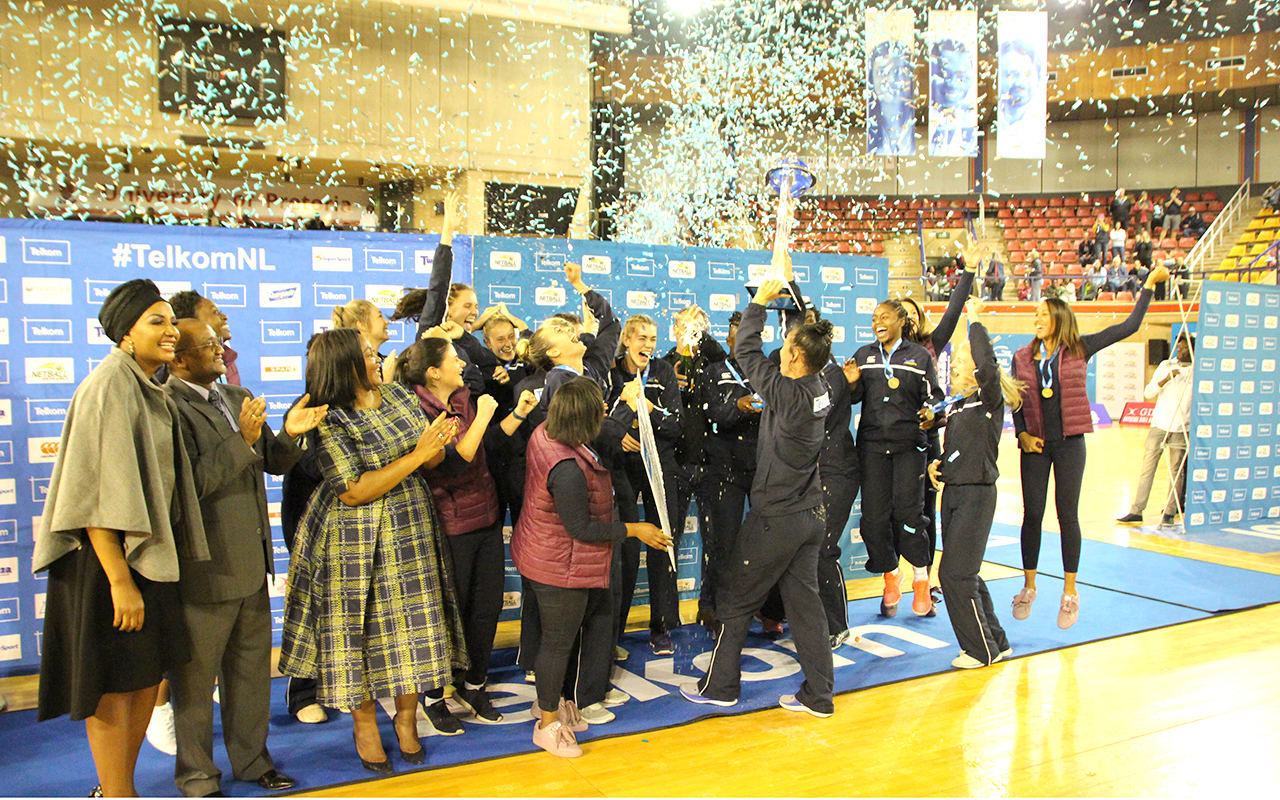 The Gauteng Jaguars coasted to their third consecutive Telkom Netball League title by beating the Western Cape Southern Stings in the final at the University of Pretoria’s Rembrandt Hall on Saturday.

Considering the two sides had claimed a win each against each other in previous matches in this year’s tournament, it was expected to be a much closer contest.

Last year’s final featured the same opposition and that one could indeed have gone either way, but this time, it was all about the defending champions who powered their way to the 53-38 win to make sure the trophy stayed in Gauteng.

“What a great team and what a great God,” – 2019 Telkom Netball League champs, the Gauteng Jaguars’ coach, Jenny van Dyk

The Jaguars were simply quicker and slicker and some superb passages of play meant they had already notched up a nine-goal lead by half-time on 28-19.

There was more of the same in the second half, and while the Stings did fight to stay in it, they were just outplayed.

“What a great team and what a great God,” said a thrilled Jaguars coach Jenny van Dyk afterwards. “It was a fantastic run for us this year. That first loss [against the Stings] really came in handy this year and I’m just really proud of how the girls stepped up. They’ve just been phenomenal. They played with so much character. I just love them to bits.”

Asked whether she expected a closer final, like last year, Van Dyk reckoned: “No. It’s easy to say it afterwards, but I knew this year it was going to be an easy one for us in the final because we worked extra hard. So it’s bound to help at one stage or another when you put in all that hard work.”

Earlier, in the playoff for third place, which was also a repeat of last year’s match-up, the Free State Crinums managed to reverse the result of 2018 with a 56-49 win over the North West Flames.

Last year’s encounter went to extra time to decide who finished in third place, but this time it was a far more clear-cut affair.

While the first two quarters were close, with the Crinums just staying ahead by one goal, they always seemed to have the edge.

They were three up by the end of the third quarter and took complete control in the final period to open the gap to as much as 10, but eventually to win it by seven.

“I am so proud of each and every one of them.” – Free State Crinums coach Burta de Kock

“I’m very satisfied with that performance in our last game. From yesterday already everything worked well on attack and defence,” said Crinums coach Burta de Kock, whose side just missed out on reaching the final after losing to the Gauteng Jaguars by one goal in their semi-final.

“We didn’t make it yesterday because of some decision-making at crucial times. It’s nice to know we can work harder and the players really stood their ground.

Speaking about motivating her side after the narrow semi-final defeat, the coach added: “From a very good game yesterday and not making it to the final, it was a process to pick them up and say we have to play for something,” said de Kock.

“That something wasn’t actually what we wanted initially – we worked for gold. But at the end of the day we’re happy for the third position because we were fourth last year, so I am so proud of each and every one of them.”

Meanwhile, next year’s Telkom Netball League will see the KwaZulu-Natal Kingdom Stars moving up to the first division while the Gauteng Golden Fireballs will drop down to the second. That’s after the Stars claimed a 59-57 win over the Fireballs in the promotion playoff.

It seemed the KZN side were comfortably booking their spot in the higher division when they were up 30-25 at half time and 48-42 ahead by the end of the third quarter. But a determined fightback from the Fireballs in the final period saw them closing the gap and even taking the lead at 50-51 before the KZN side took it away from them.

The three nail-bitingly close matches the Stars had pulled through during the tournament clearly developed their composure and they were able to hold their nerve through the final minutes to claim the two-goal victory.

“When the coach called a timeout in that fourth quarter, I just said to the girls, keep composure, keep calm and keep the ball and I think at the end of the day, the crowd pulled us through,” said Stars captain Precious Mthembu after the match. “Things like that can really get the momentum going and lift the spirits of the girls.

“Thanks to our shooters, I think they put up a good fight for us today and that’s what we really needed in this game. Throughout the whole tournament, we’ve had some close games. We’re looking forward to playing in the A section again. It’s going to be a tough one, but we’re blessed to be playing there so we’ll put up a fight.”

As the tournament wrapped up, the Stings’ Jo Prins was named the best centre, while the Crinums’ goal attack Lefébre Rademan was named best shooter. The Flames’ Simoné Rabie claimed the award for best defender, while the overall award for Player of the Tournament went to Flames wing attack Kgomotso Itlhabanyeng.

Telkom Netball League Final at the Rembrandt Hall at the University of Pretoria, on 8 June, 2019:

Photo 1 caption: The Gauteng Jaguars cruised to a 53-38 win over the Western Cape Southern Stings to bring a close to the 2019 Telkom Netball League, and seal their remarkable third consecutive national title in a row. Photo: gsport

Photo 2 caption: A chilled Jaguars Coach Jenny van Dyk explained: “I knew this year it was going to be an easy one for us in the final because we worked extra hard.” Photo: gsport

Photo 3 caption: Bolstered by a centre pairing that intercepted the Stings time and again, the Jaguars goal shooters were consistency epitomised throughout all four quarters of the final. Photo: gsport

Photo 4 caption: The Jaguars were simply quicker and slicker and some superb passages of play meant they had already notched up a nine-goal lead by half-time on 28-19. Photo: gsport

Photo 5 caption: The first hosting of the SA Netball League with Telkom as naming rights sponsor came to a close in the University of Pretoria’s Rembrandt Hall on Saturday evening, 8 June, 2019. Photo: gsport