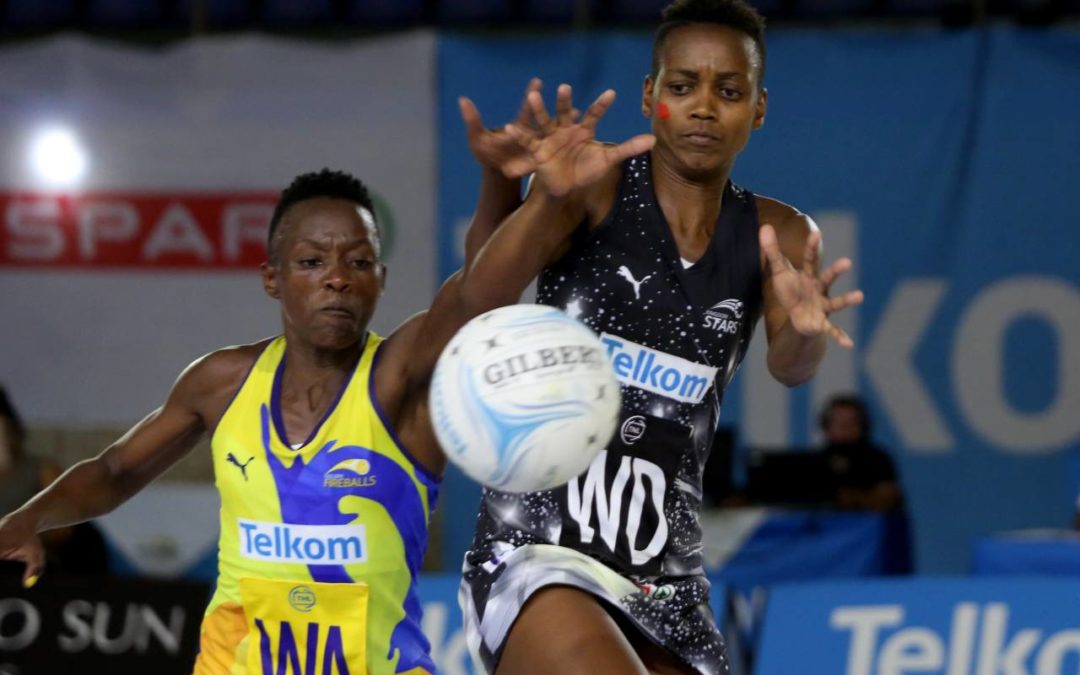 The Gauteng Jaguars and Southern Stings held each other to a 35-all draw in a fast-paced match in the first match of the day of the Telkom Netball League on Saturday, 17 October 2020.

The Stings had a very strong start to the game making use of all their center passes as they took the lead in the first three quarters however a few basic errors in the last two minutes of the third quarter saw the defending champions equalizing and the score was locked at 25 all.

The Stings fighting spirit still gave them a 28-25 lead in the third quarter and at this point it looked like things were going their way but the last two minutes of the match had both coaches holding their breaths as the Jaguars levelled the game. The final 60 seconds included a plethora of careless mistakes in the Jaguars shooting circle but, Venetia Grobler and Chantelle Swart kept missing under the pole and missed the opportunity to give the team their fourth consecutive victory.

Jenny van Dyk, Jaguars coach, believes the Western Cape side were out for revenge, ’Definitely a little bit of revenge from the Stings team because of last year’s TNL final so obviously they wanted to get back at us. That emotion is done and sealed but we still managed to level the score and didn’t lose the game, so I’m very proud of the girls.”

The Northern Cape Diamonds continued with their winning ways with a 44-40 win over the Kingdom Queens. The Diamonds started the tournament with a defeat against the Mpumalanga Sunbirds in their opening game but went on to win their second game yesterday, which was their first win in the TNL since 2016. Karien Opperman’s side will next take on the Tornados Sunday afternoon at 3.

Meanwhile, the Free State Crinums staged a dramatic onslaught in the last quarter to beat the North West Flames 42-39. The Flames took advantage of the unforced errors made by the Free State side and lead from quarter one to three.

A different Crinums side showed up in the final quarter with lots of character to win the game by three goals. Crinums coach, Burta de Kock, is grateful for the inexperience players that stepped up, ‘’I’m very proud of the players because the youngsters stepped up, sometimes coaches focus on using experienced players and forget that the babies just want to take to court and prove themselves.”

The Mpumalanga Sunbirds beat the Western Cape Tornados 35-31 in their third Telkom Netball League Division B match. The Sunbirds raced to a 11-4 lead in the first quarter to put pressure on the newbies, but the Tornados still trailed by 5 goals in the second quarter.

Danlee Matthew’s side only managed to shoot just two goals in 12 minutes in the third quarter and the Sunbirds wasted no time converting those turnovers to extend their lead.

The final quarter belonged to the Western Cape Team, but it was too late for them to play catch up. Even after scoring 10 goals and putting up a fight in the end, that performance was not enough to secure them a win.

Sunbirds Wing Attack, Keneiloe Kgasi, earned herself the player of the match accolade after dominating both the center and goal third to help her team make it three out of three wins so far in the competition.

In another match, the Kingdom Stars had their hearts broken again in just 24 hours after being stunned by the Golden Fireballs following a 37-35 defeat. The match started off with a 9 all draw in the first quarter but it was the Stars that found their rhythm leading the second and third quarter by three and four goals, respectively. Yesterday’s storyline was no different to today’s, as the Fireballs equalized in the last two minutes and ended up winning by a 2-goal margin.

Fireballs captain, Tshinakaho Mdau, who played centre for the very first time is not fazed by their slow starts, ‘’We enjoy the challenge of trailing behind and coming back but honestly, I think it’s a lack of communication and focus. We are still a new team, we have only been together for two months compared to the other teams, so we fairly still getting to know each other.”

The last match of the day resulted to a 49-22 victory for the Gauteng Jaguars who drew against the Southern Stings earlier today. Some of the Jaguars key players were rested for this game including captain, Izette Griesel and Akosua Mensah, despite tomorrow’s rest day for the team.

However, SA U/21 coach, Dr Elsje Jordaan, lamented on how other teams opt to not use the best combinations for these exhibition matches which makes it difficult to use these games as a yardstick for the team’s progress.