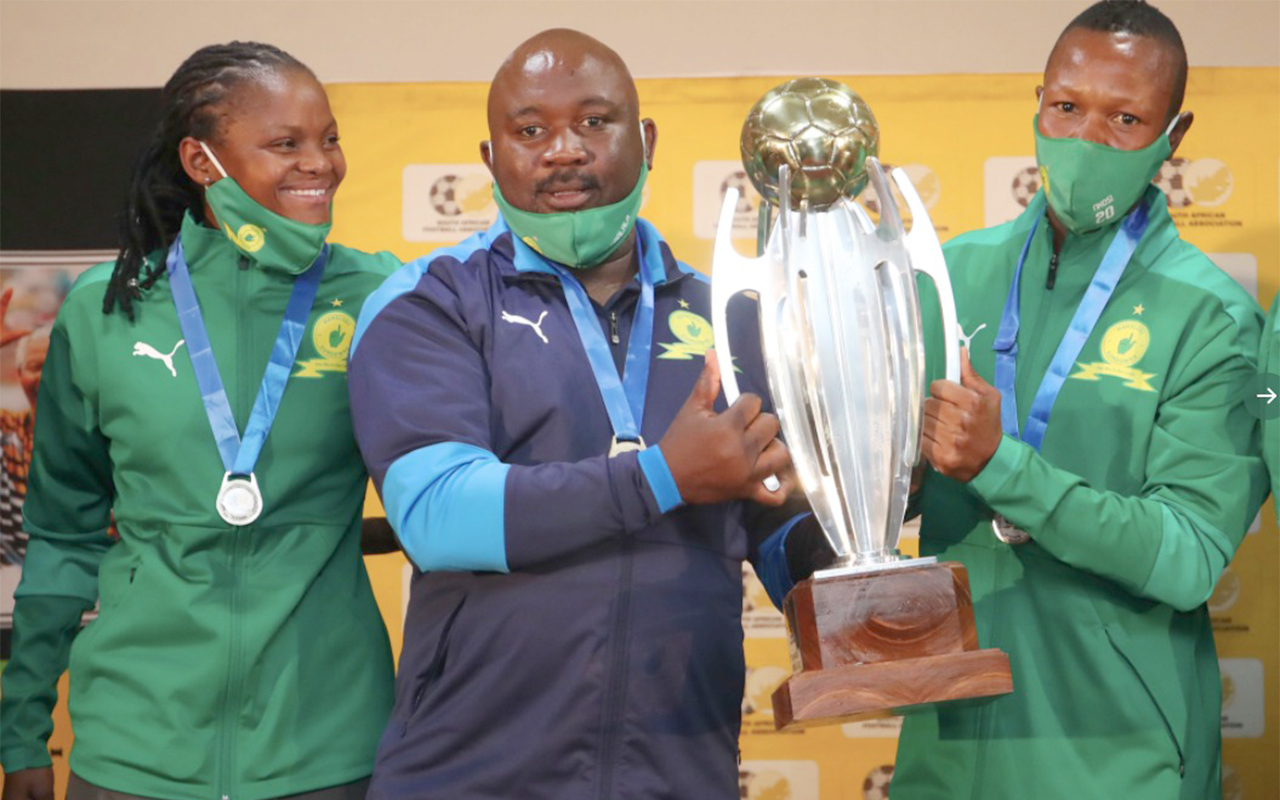 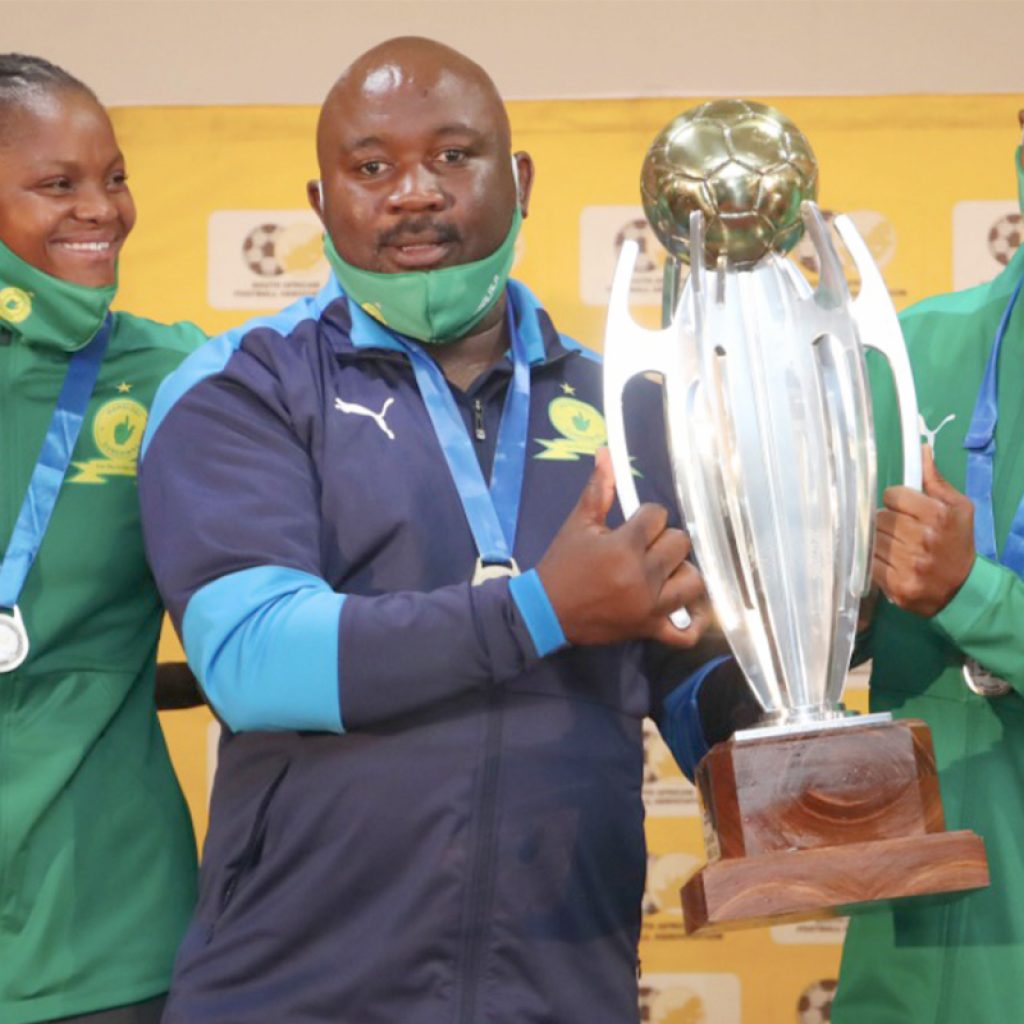 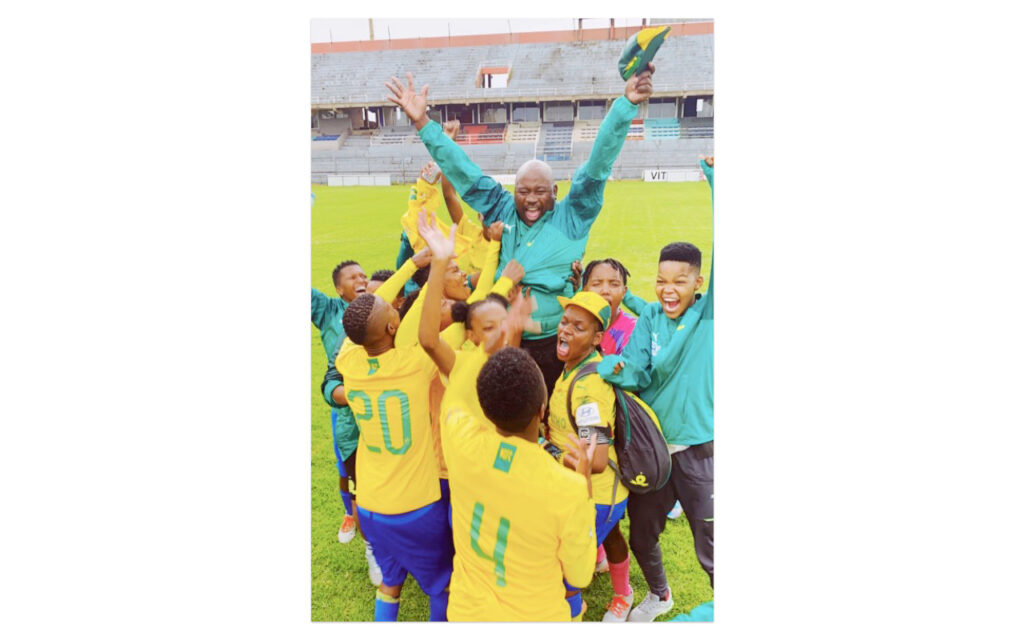 The inaugural SAFA National Women’s League season proved to be a turning point for the growth of women’s football in South Africa.

Tshabalala together with his formidable technical team and players sailed through unperturbed conquering all opponents to claim the first ever crown in the South African women’s championship.

The former Tembisa Black Pirates player, who hung up his boots in 2008 to turn to coaching full-time, admits that as new as the campaign was, he was impressed with the clubs’ overall performances.

Unfortunately, the season ended abruptly due to the global Coronavirus pandemic, which led to a later awards ceremony held to honour Sundowns and the best performing players for the season.

The team walked away as the biggest winners to the delight of Tshabalala who hopes to continue succeeding.

Speaking with Celine Abrahams, Tshabalala reveals the challenges of coaching women’s football and shares views on the constant talk of equal pay in sport.

Coach Jerry, thank you for taking time out for gsport! 2020 has come with many ups and downs. How would you describe the year?

One of the toughest years we have ever had, yes the year started bright for us. As you may be aware that the team was still on top the log. The unfortunate happened which was COVID-19. We were all new to this pandemic and made the year very difficult.

Despite the negatives that the global Covid-19 pandemic brought in terms of sport being halted, what were some of the positives you gained throughout the Lockdown period?

“This pandemic taught us to take responsibility in terms of our own lives and goals that we want to achieve as individuals.” – Mamelodi Sundowns Ladies head coach, Jerry Tshabalala

I guess the positives were to see how determined one was in terms of trying to improve the team while they were at home. Also, seeing the players adhering to programmes sent to them. This pandemic taught us to take responsibility in terms of our own lives and goals that we want to achieve as individuals.

As sport has gradually made its way back, your team – Mamelodi Sundowns Ladies – dominated headlines after being the biggest winners at the SAFA National Women’s League awards ceremony recently. What has it been like coaching this group of players?

It’s been a great honour for me to coach this bunch of winners. The commitment they showed throughout the season was amazing, the never die attitude sums it up all.

Looking at the inaugural SNWL season, what did you make of the campaign?

As new as it was, yes, challenges were obviously expected but overall I was really impressed with the teams that competed in the league, especially during the second round of the season.

What are some aspects that still need to be worked on in order for the league to develop further?

I believe from the association they need to really improve on the administration side, especially with the teams. We can’t still be having walk overs on this league. From the teams’ side, I believe we need to market our teams properly so we can attract lots of sponsors. I’m very impressed with how JVW are doing their business, they were formed not so long ago but now they are a big brand.

We saw the Sundowns team dominate throughout the season. What is it about the club that made your team standout as compared to the other teams?

“Our achievements came through from the commitment from the technical team and the players.” – Tshabalala speaks on the team’s achievements.

Our achievements came through from the commitment from the technical team and the players. Our management played their role by giving the team the support we needed. Look, there are varsity teams that I believe have similar structures like ours or even way too far better than us.

What have been some of the challenges you have faced coaching a women’s football team?

Coaching a women’s team is a challenge on its own. Before we campaigned in the SWNL, it was really demotivating to travel away to a team and when you get there they are nowhere to be found. Biggest challenge is to try and keep players as motivated as possible, remember these women play football for the love of it without them getting paid. At times we don’t have enough players at training with players citing financial issues. Most teams are faced with these challenges and they hinder coaches from producing good players.

What are your views on women’s football in the country and what needs to be done to ensure that the women’s side of the game develops faster in future?

Women’s football has grown in leaps and bounds since. Look, now most of our junior national teams and Banyana Banyana have done well especially in the continent and even globally. Surely if we could have a formidable professional league that will help our football develop faster and it will also inspire young up and coming players to take football as a career from an early age.

Why is it so important for you to play your part in helping women achieve their sporting dreams?

It gives me joy to see that I contribute in helping our youth to stay away from substance abuse and focus on achieving their dreams.

The constant talk of equal pay continues to rumble in the football community. What are your thoughts on gender inequality in sport in general?

This is a burning issue and is very broad. Here we are talking about a stigma which is surrounding the whole world. I believe all the athletes should be rewarded equally despite their gender because they are playing the same sport.

What state would you like to see women’s football in the country be in the next few years?

One would appreciate if we could have a professional league and each team participating in the league has a development side such as U13, U15 and U17.

Looking at Banyana Banyana, coach Desiree Ellis introduced a number of new faces during the 2020 COSAFA Women’s Champs. Are there any names of developing players at Sundowns that the senior national women’s team should keep an eye on for the future?

Great move made by coach Des, clearly this shows that the coach has a good plan for the future. What impressed me the most was seeing players who played in the World Cup U17 team going into the senior side and performing well. At Sundowns, we have a few youngsters who are 14 years old and they are raising their hands, the likes of Lumka Qhekeka and Snenhlanhla Khasake.

Lastly, what are you still hoping to achieve in your career as coach?

I’m hoping and looking at achieving more with the team, possibly win Champions League and participate in the Women’s Club World Cup.

Image Captions: Mamelodi Sundowns Ladies head coach, Jerry Tshabalala, is changing the face of women’s football as he plays his part developing future stars. He chats about the inaugural #SNWL season, and aspirations to participate in the Women’s Club World Cup. Photos: Supplied