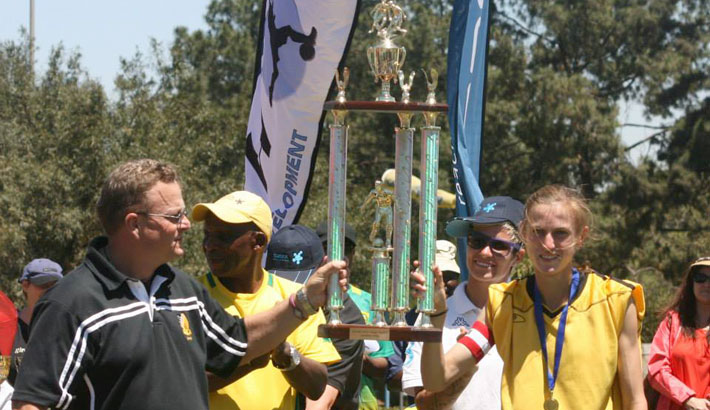 Boasting more than 60 school teams across its three leagues, the 2014 edition of the JVW Girls School League kicks off its third season with the Three-Term League getting underway this week.

Also including the Private League and Four-Term League, the popular league was founded in 2012 by Banyana Banyana captain, Janine van Wyk, to promote, develop and expose potential players at grassroots level, allowing girls to achieve their dreams and goals in the sport.

“I’m really looking forward to the third year of the school’s league being a success,” said van Wyk. “And, I am hoping to see more talent, making another player’s dream come true by possibly being scouted to one day play for the National Team. The league is great for the girls, as they are able to play in a competitive environment.”

Through the School’s League players have been able to be scouted to play for teams at club level, as well as getting the chance to play in the Women’s SASOL League, both through JVW as well as other teams in the League.

In previous seasons, players in the schools league have been scouted to attend National Team trials after National team selectors attended the JVW Schools Finals Day, where the best of the best played each other in ‘Playoff-style’ matches.

Nelisiwe Mchunu, who received her second cap for Banyana Banyana last month, was selected after receiving the inaugural JVW Player of the Year Award, in 2012.

“The JVW league has discovered so much talent in schools, and players are encouraged to grow in the sport,” said Mchunu. “If you have talent, JVW is willing to help you grow as a player – both Nationally and Internationally.

“I was scouted by playing in the JVW School’s League, and many more players just like me will also have an opportunity.”

Currently representing Croesus Ladies in the SASOL League, Amanda Mthandi is another player through the League to received a call-up to the National U20 Team, going on to score a goal on her debut against Botswana, during last year’s World Cup Qualifiers.

This year will prove to be yet another successful season for girl’s football at schools level, and the League anticipates scouting many more players that have the opportunity to take the sport to another level.