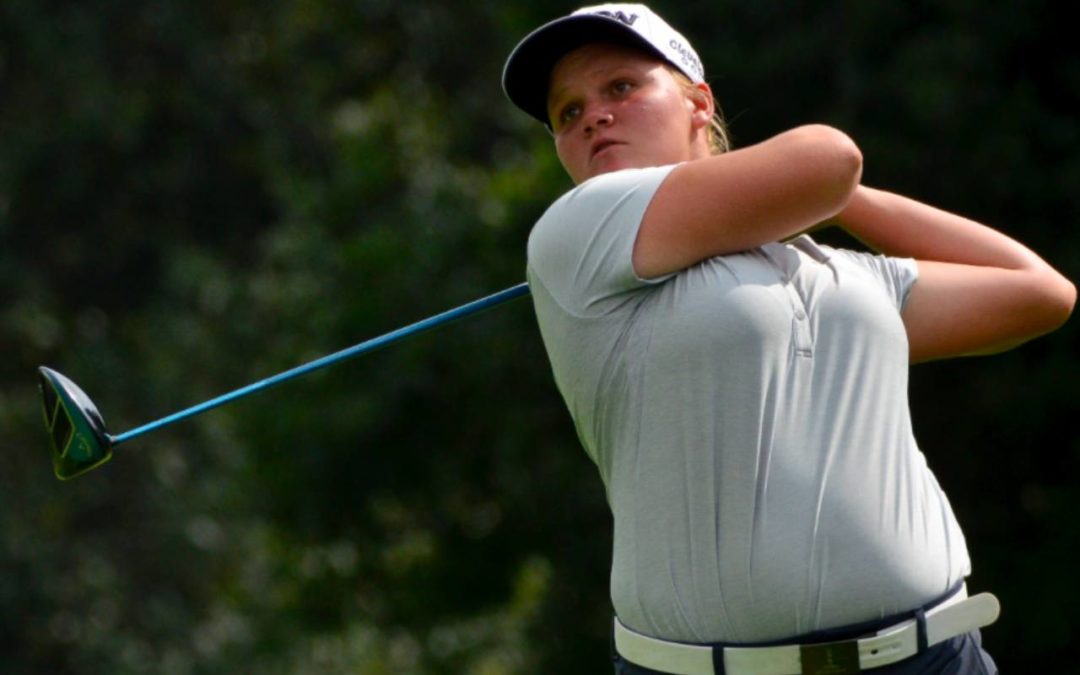 The now 16-year-old previously made junior golf history when she beat a predominantly male field at Royal Johannesburg and Kensington Golf Club with a seven-under 65 at the East Course to become the first female champion on the Bridge Fund Managers Junior Series.

Gathering confidence, Floyd was instrumental in helping Ekurhuleni to a runner-up finish in the WGSA Women’s 72-Hole Championship.

The GolfRSA B-Squad player took that form to Indonesia, where she finished fourth in the 13-14 age group at the Himbara World Junior Golf Championships, presented by Ciputra, at the Damai Inda Golf Club.

In October 2018, Floyd played a pivotal role in Ekurhuleni’s first-ever victory in the SA Women’s IPT at Devonvale. She won all three Singles and amassed 2.5 points for the team in the Foursomes to share Most Valuable Player honours with teammate Nadia van der Westhuizen.

But it was on the national circuit that Floyd really blossomed.

She finished second in the Nomads SA Girls Rose Bowl, fifth in the SA Women’s Stroke Play Championship and broke through for her first senior success in the Gauteng North Women’s Open Championship.

She also capped a remarkable Open Amateur season with a second trophy finish in the Mpumalanga Open, which boosted her into the top 10 on the Open Amateur Rankings.

Speaking with GolfRSA, Floyd chats about her transition from junior to senior ranks and shares advice to youngsters starting out in the game.

Where and when did your love affair with golf start?

My mother is a tennis coach at the club and while I was waiting for her, I started messing around with golf clubs. When I was seven, the coaches at Benoni Country Club introduced me to the game.

One of the coaches said I had talent and decided to help me. I joined Stix and Stones, a junior kids group, and they coached me. Essentially, they gave me the skill set and encouragement I needed to advance in the game.

I started to play SA Kids Golf tournaments and when I was eight, I qualified for my first international event – the Euro Kids Golf Championship in Scotland. I won my age category and that really encouraged me and gave me the belief in my ability and game.

The following year I played the Kids Golf Championship in the USA, where I finished third in my age group. That experience was something really special. I love competing against golfers with different abilities from all over the world.

When my coaches moved away at Benoni Country Club, I joined the Grant Veenstra Junior Golf Academy at Ebotse. Grant changed my game and moulded me into the player I have become.

As a child, what did you wish to become when you grew up?

I’ve wanted to be a professional golfer since I was seven.

Talk to us about the strengths of your game and what are the weaknesses or aspects of the game you still need to attend to.

My strengths are my drives and long irons. My putting and my chipping around the greens is also strong, but my weakness is pitch shots from 80 metres out.

How tough was the transition from the junior ranks to the senior circuit?

It was tough! The atmosphere is more serious and the standards are very high. The most difficult thing about travelling is being away from home for a long period of time and getting used to travelling long distances to foreign countries. My school work used to suffer, but now that I am attending a ‘home school’ it’s a lot easier to fit my work in around my schedule and that takes a lot of pressure of my game. My game improved and I could see the standards that I needed to set for myself and I was able to change my routine to meet my goals.

Tell us five things about yourself that people don’t know about.

1. I have four sisters and one brother
2. I am an all-round sports fanatic
3. I love playing tennis and swimming
4. My favourite food is Sushi
5. I love watching movies

If you had to pick up one animal to describe you, what would it be and why?

A lion because they are strong, determined and control their own destiny.

What is the best piece of advice you have ever received?

What’s your favourite club in your bag?

I have three favourites: my driver, my 3-wood and my putter.

Describe yourself in one word.

What advice would you give youngsters just starting in the game?

Set yourself goals. Be determined. Keep cool. Work hard. Never ever give up and play your own game. And remember that it’s the course you have to beat. Stick to this and success will come to you.