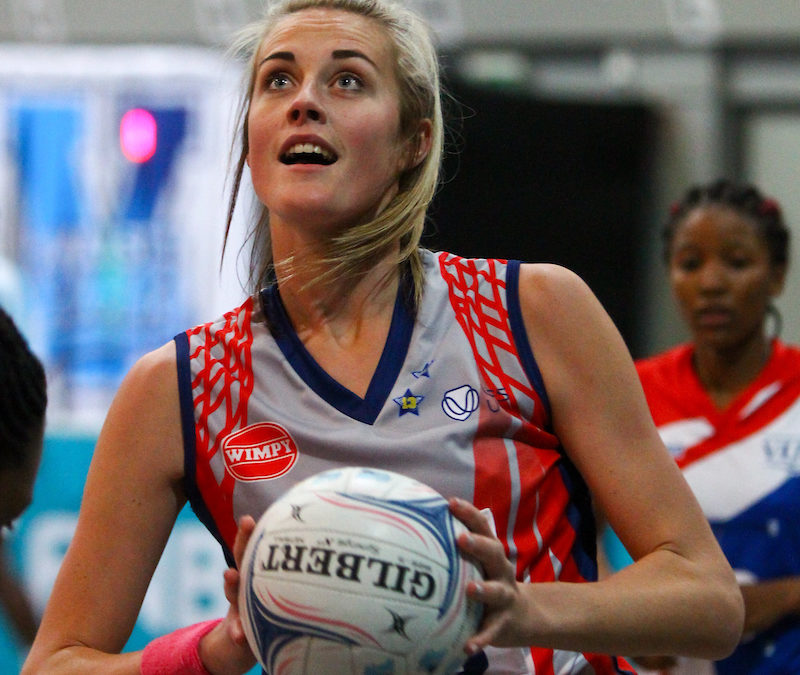 Starting with a new line-up, Kovsies did well to get an early lead and eventually accelerated to end the game with an extensive goal margin, winning the match 90-25 in Bloemfontein on Sunday evening.

Jabu Mabina, Sikholiwe Mdletshe and Lefébre Rademan returned this week, with new starting line-up players Gertriana Retief, Bianca de Wee, Jana Scholtz and Ané Retief. The home side got off to a very good start and with great team work all round they ended the quarter with a 10-goal lead, the score standing at 17-7.

Kovsies started the second quarter with some changes with Petro Coetzee coming on at centre, Khomotso Mamburu coming on at goal keeper and Mdletshe moving to wing attack. Scholtz showed off her defensive skills winning a few interceptions while on the other side of the court the attacking players did well to feed the ball to their shooters. With two minutes left in the half, VUT had to bring on their only reserve due to an injury. Kovsies ended the half strong, leading 32 goals to 14.

The home team changed things up again in the third quarter with captain Alicia Puren on at shooter, De Wee back on at wing attack, Tanya Mostert on at centre, Mdletshe moving to wing defence, Mamburu moving to goal defence and Ané Retief coming back on at goal keeper.

Kovsies got off to a clean start scoring 10 goals versus their opponents’ 2 in the first half of the quarter. They showed why their home crowd calls them the ‘Dream team’ as they cleanly brought intercepted balls straight down court to be converted by the shooters who were on fire. The 50-goal mark was reached with three minutes remaining in the quarter and Kovsies led by 55 goals to 18.

Remaining unchanged for the last 15 minutes, Kovsies took the first power play by storm scoring four double-pointers while VUT scored only one taking the score to 66-20. Rademan showed her athleticism as she dashed around court, particularly across her baseline for some surprise passes and leaving her defenders behind. The second power play was called with just less than seven minutes to play. VUT worked hard to keep the ball and utilize the power play, but again scored only one double-pointer after Kovsies scored three.

As the crowd really got behind their team, Kovsies captain scored the final goal, taking her team to 90 with VUT’s final score standing at 25.

*Also, congratulations to Kovsies captain, Alicia Puren (pic) who got engaged over the weekend.*