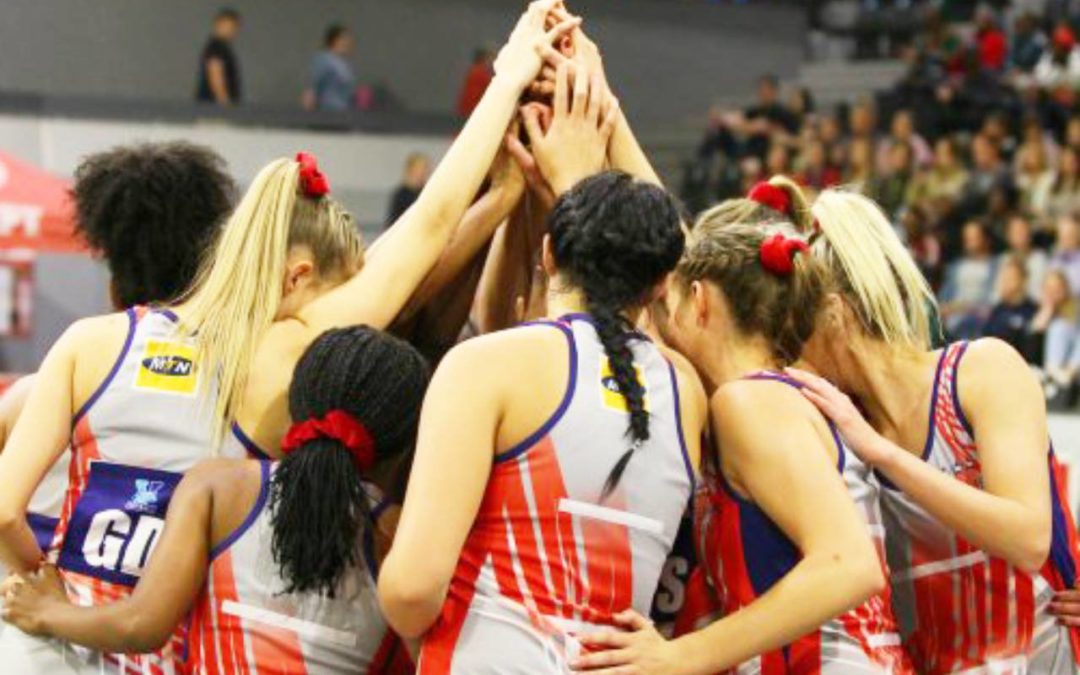 In an epic, to and fro battle for a home semi-final and a dress rehearsal of sorts for their semi-final clash, Kovsies took a narrow win over Maties, 65-61, in the Callie Human Hall in Bloemfontein on Monday.

The home side got the game underway with the first centre pass and a classy shot from Rolene Streutker, which was quickly matched by Maties. An early interception by Sasha-Lee Petersen gave the visitors the first turn, but the home side quickly returned the favour to level the scores. This was soon followed by interceptions by Bianca de Wee and Ané Retief that gave Kovsies side a two-goal lead.

The Maties side responded and again levelled the scores at five goals apiece. A rebound gathered by ex-Kovsies goal defence, Khomotso Mamburu, allowed Maties to take the lead. With just over 6 minutes to play, Kovsies goal defence, Chanél Vrey was replaced by Jana Scholtz due to injury.

A rebound gathered under the Maties goal post, again levelled the scores at 10 goals each, followed by an interception by Sikholiwe ‘Sne’ Mdletshe to reverse the lead in Kovsies’ favour. The final minutes of the first quarter saw an unfortunate overthrow and a missed shot in the Kovsies goal circle, allowing the Maties side to even the scores and take a one goal lead at the end of the first quarter at 16-15.

The Second Quarter Saw Maties Ringing in the Changes

While Kovsies remained unchanged at the start of the second quarter, Maties made a few changes as Nicola Smith replaced Stephanie Brandt at goalkeeper and Adri Uys took on the centre position.

Kovsies had an unfortunate start to the second quarter with Mamburu intercepting the first pass, but an interception by Retief, quick hands from Scholtz and explosive play from captain Lefébre Rademan, allowed the home side to level the scores and then take a four-goal lead. Exceptional play between Rademan and Streutker extended the Kovsies lead to five goals, aided by pressure from Retief and de Wee.

Unforced errors from the home side saw Maties closing the deficit to a single goal at 30-29, followed by missed shots giving the Stellenbosch side a one goal lead. Kovsies were able to claw back their lead in the final minutes to end the quarter with very even statistics and a 33-31 lead.

The Maties side started the second half with four changes as Jo Prins moved to centre and captain Nicholé Taljaard to wing attack, with Chrisley Marshall coming on at goal attack and Brandt coming back on at goalkeeper. Kovsies again remained unchanged.

Despite two excellent interceptions by Retief, Maties were again able to level the scores and take a one goal lead thanks to Mamburu’s defensive pressure in the Kovsies goal circle.

There Was Early Pressure from Maties in the Final Quarter, But Kovsies Held On

An interception by Prins and missed goals by Kovsies, allowed Maties to extend their lead to four goals. With seven minutes left in the third quarter, Maties called for their Powerplay, which Kovsies immediately capitalised on thanks to quick reflexes by Khanyisa Chawane, ending the Powerplay at 41 goals each.

Maties quickly pulled away again to a two-goal lead, but the home side were able to level the scores again as Brandt received a caution for persistent and deliberate contact. With seconds left in the quarter, Kovsies brought on Ancia Pienaar to replace Retief at goalkeeper followed by quick play to sneak in a two-goal lead at 48-46 at the end of the third quarter.

Maties started the final quarter with a change in their goal-shooter bib as Claudia Jarrard replaced Sian Moore, while Taljaard moved back to goal attack.

Early pressure by the Maties defence saw the Kovsies side having to be patient around the goal circle, followed by an unfortunate overthrow by Mdletshe. Maties capitalised on the error and levelled the scores. For the first five minutes of the quarter, goals went on centre pass. With just over eight minutes to play, an unforced error in the Maties goal circle saw Kovsies taking a two-goal lead, followed by Retief coming back on at goalkeeper.

A held ball call for Kovsies saw Maties closing the deficit to one goal, and an interception by Petersen allowed them to level the scores. With just over 4 minutes left to play, and the Kovsies Powerplay still to come, Maties made a few defensive changes as Mamburu left court, making way for Brandt at goal defence and Smith at goalkeeper. Seconds later, Mamburu came back on to replace Smith.

The final two minutes, automatically the Kovsies Powerplay, was started with a Maties centre pass which would have levelled the scores if it was converted. Thanks to an excellent interception by Retief, though, Kovsies were able to stretch their lead to four goals, winning the game and securing a home semi-final, 65-61.

Photo 1 Caption: In an epic clash, Kovsies managed to secure a narrow 65-61 victory over Maties on Monday evening during the Varsity Netball Tournament. Photo: varsitysportssa.com