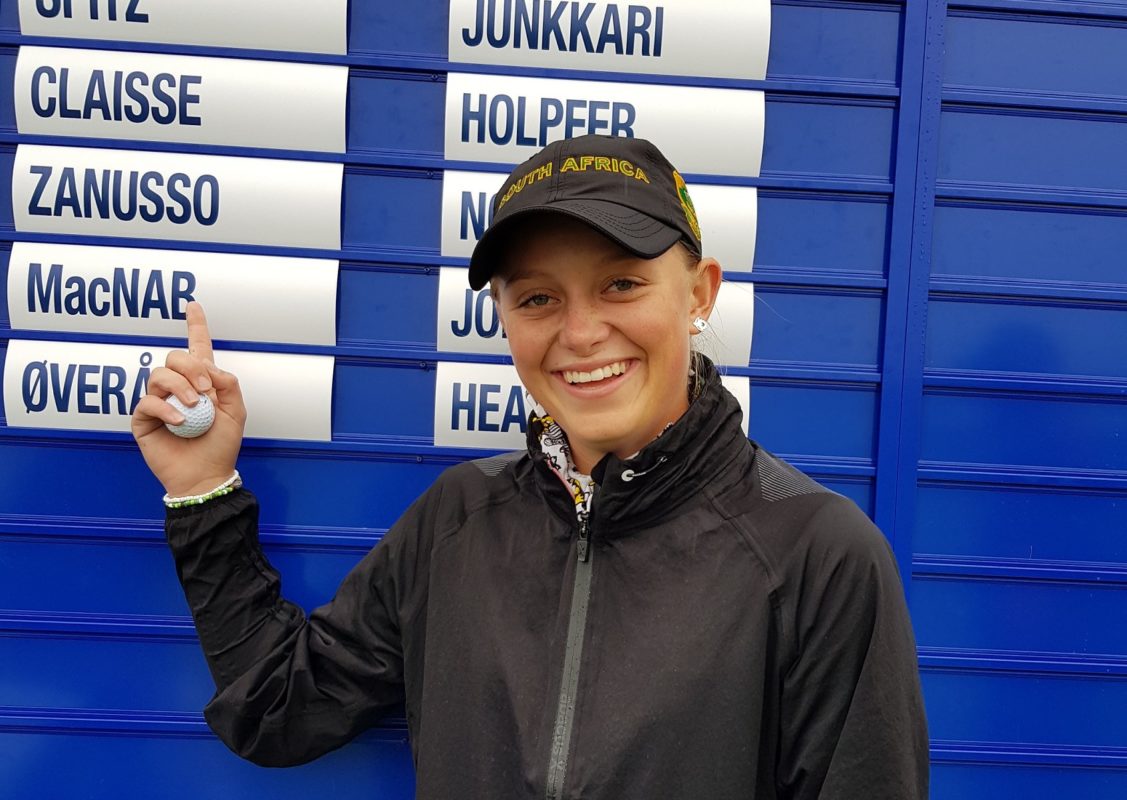 ARDGLASS, Ireland (18) August 2018 – Caitlyn Macnab’s run in the Girls British Open Amateur ended with a third round exit at Ardglass Golf Club in Ireland on Friday when the 16-year-old Benoni golfer was eliminated by Sophie Johnson from England.

Macnab started the stroke play qualifier at the 90th edition of the prestigious junior event at the famous Country Down links alongside GolfRSA Elite Squad team-mate Kajal Mistry.

Both players finished among the leading 64 players who made the match play stage. Mistry carded rounds of 73 and 77 to tie for 31st. Macnab shot 74 in the first round and rocketed to joint third on one-over 141 with the low round of the tournament, a three-under 67.

Martha Lewis from England defeated Mistry 2 & 1 in the first round, but Macnab was in magnificent form on a testing day and scored two decisive victories to reach the final 16.

She beat Leah Temple-Lang from Ireland 3 & 1 in the round one and defeated Celeste Dao from Canada 4 & 2 in round two. The Serengeti golfer faced Johnson just as Storm Debbie hit the east coast of Ireland early on Friday morning.

“It was the worst weather we experienced since arriving in Ireland,” said Womens Golf South Africa president Sally Greasley.

“We could barely walk on some holes and it was hard to watch the girls battle the driving rain and the gale force wind that was raging up to 80 km per hour. We gave up on our umbrellas, because the struts were bent in minutes.

“We even had to get Cat an electric cart, because she just couldn’t pull her cart in the wind. She started with a great drive straight into the wind up the hill. Her second shot landed short of the pin and she drained a long putt for the birdie to go 1-up.

“They halved the second in bogeys. Her approach at the third landed close to a bush, giving her little room to manoeuvre. She got a shot off, but the wind pushed her ball well past the hole and she lost the hole. She conceded and the match was all square.

“Both players lost their balls on the fourth and reloaded, but Cat couldn’t get up and down and Sophie won the hole to go 1-up.”

Macnab lost five and six. After the pair halved seven in bogeys, eight in birdies and the ninth in pars, the English junior led 3-up as they headed down the back nine.

“Cat left her drive short at 10, a par three that has been most difficult hole of the tournament,” said Greasley. “The wind got hold of her chip, but she drained a long putt to halve the hole in bogeys.

“The 11th once again punished her after she hit her first drive out of bounds on the beach and her second drive in the bush. She had to reload for five after she lost her grip trying to hack it out and the club nearly flew out of her hands. Her second was short of the green, but she conceded after Sophie reached the green in two.”

Macnab was 5-down after a bogey at 12. The players halved the par four 13th with bogeys and both parred the 14th. The South African hit a good drive in the crosswind at 15 and a great trap shot from the fairway bunker to just short of the green. Her birdie effort missed and Johnson holed her birdie putt to clinch the match 5 & 4.

Macnab was understandably disappointed, but recognised the value of experience.

“Our first goal was to reach the match play stage and we were both over the moon to make to make the top 64 in an international championship of this stature,” said Macnab.

“The wind was a serious factor on the first day of the match play, but I managed to get around really well to win the first two matches. The third round truly an ordeal. It was incredibly tough to control the ball in the howling wind and rain.

“I am very proud of the fact that I never stopped fighting. This was the first time for Kajal and I to play a true links course and it was an absolute eye opener. Every shot we played in this championship was experience that will help us in the future.”

Macnab and Mistry will make their debut for South Africa in the Espirito Santo Trophy at the World Amateur Team Championship at the end of August alongside former South African number one Kaleigh Telfer, who has just started her second season at Auburn University.

“I think South Africa can be truly proud of the way Caitlyn and Kajal came through this baptism of fire,” said Greasley. “We are staying on in Ireland until we travel to Carton House and they will be playing more links courses to give them the chance to build more experience in preparation for the Espirito Santo Trophy.”

Written and released by Lali Stander