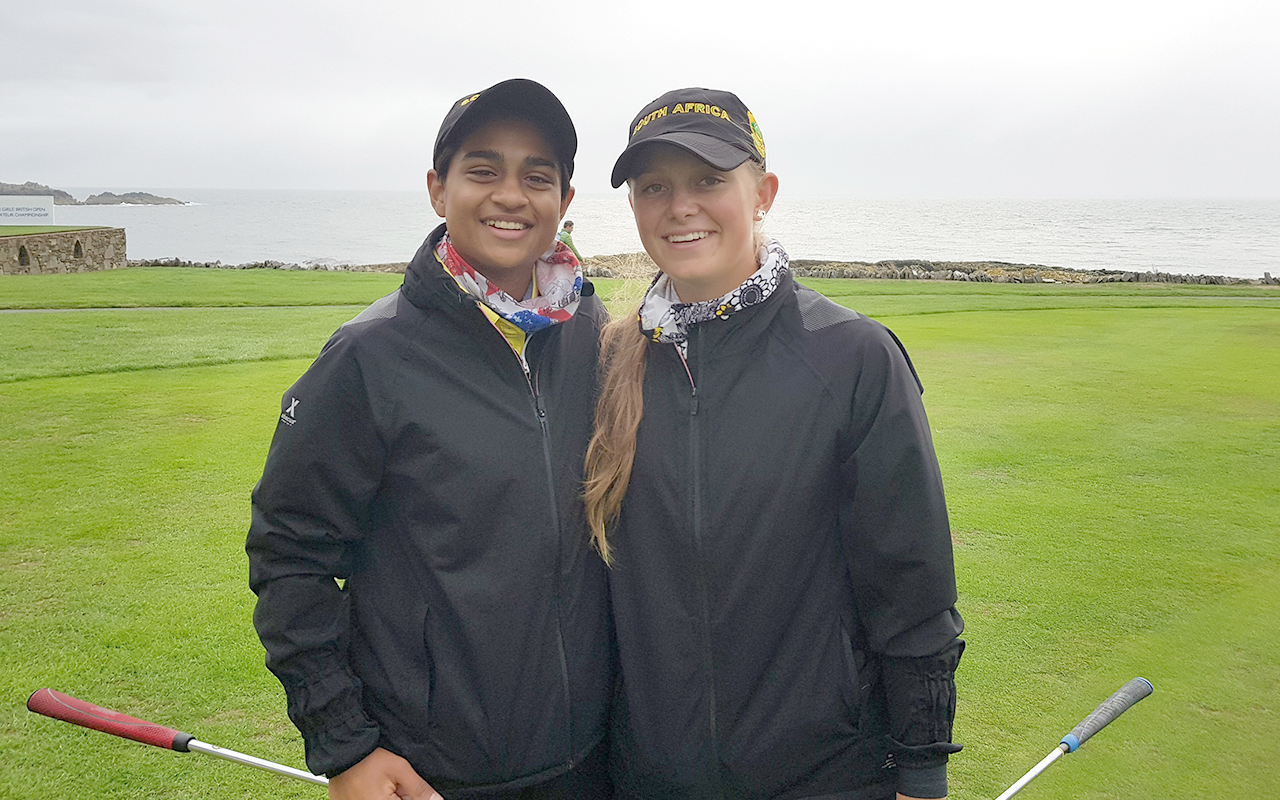 The 16-year-old Macnab from Benoni was in magnificent form in the first two rounds of the match stage on another testing day at the County Down links. She swept aside Leah Temple-Lang from Ireland 3 & 1 in the round one and sent Celeste Dao of Canada packing 4 & 2 in round two.

“It was easy the coldest and windiest day of the championship, so far,” said Womens Golf South Africa president Sally Greasley.

“When we got to the course yesterday morning, the wind was already at blowing hard. We had five layers on, and we were extremely grateful for the rain suits we brought specifically for the World Amateur Team Championship later this month.

“Personally, it was probably one of the toughest day of golf I have ever watched. The weather played a huge part in every shot. I watched Cat calculating on every shot, looking where the wind was coming from, how it would influence the flight of the ball, whether to take two or three clubs extra.

“I was immensely pleased to see how she just put her head down and accepted each shot. She told us afterwards that she just focussed on staying positive and that got her through.”

Macnab was 3-up against Temple-Lang after the first three holes, but lost the fourth after her second shot landed in a bush and left her no room for a good chip. She rallied to win five, seven and nine and led 5-up through the turn.

Mistry, meanwhile, went down 2 & 1 to Martha Lewis from England in their first round clash.

“In reality, Kajal played great golf and lost the match due to two bad shots,” said Greasley. “She lost the first hole, halved the second, and won the third with a great putt after a very difficult second shot to the green.

“She turned 1-up, but Martha squared the match with a birdie at 11. Kajal had a plugged lie at the back of the 12th green and had an impossible shot to the green. She lost the hole and Martha led for the next four holes.

“At 17, Kajal’s approach shot to the green hit the bank and didn’t reach the green. She lost the hole and the match. She was magnanimous in defeat, but I want her to hold her head up high. She achieved her goal of reaching the match play and she played really great golf.”

Macnab and Dao began their afternoon match in gusting conditions and dark skies.

The Serengeti golfer hit an amazing shot up the steep hill on the first and then stuck her second shot six foot from the pin. The Canadian landed her tee shot in the ocean and Macnab took the early advantage. They halved the second and the South African won the next three holes to go 4-up.

“From that point the match went back and forth,” said Macnab.

“I won the seventh, but lost eighth and nine. We halved 10 and at the dreaded 11th, my drive looked to be heading straight for the ocean again. Luckily the wind brought it back to the fairway and it landed just in the first cut of the rough. Celeste made a great birdie, so I was 2-up.

“We halved 12 and 13 and I won 14 to go 3-up. We both hit some incredible shots at 15 to halve the hole. I drove it down the middle at 16, but Celeste’s ball found the rough on the right.  She took three shots to get out of the rough, so I could take an extra shot.

“I was worried that my second shot would bounce off that hard green, so I laid up 30 metres short and chipped it five foot. Celeste got on the green, but it was game over. I was disappointed for Kajal. It’s tough to lose when you’re playing well, so I’m extremely thankful that she was out there with Sally to support me. Looking forward to my match today and hopefully I can cross another hurdle.”

Greasley and Mistry have put on a few extra layers for today’s first encounter when Macnab faces Sophie Johnson from England in the third round.

“Unfortunately we are in for more wind and rain,” said Mistry. “Sally and I have layered up and we look like Eskimos, but we want to be there for Cat. We both started the championship determined to reach the match play stage. Now she deserves our support, one match at a time.”