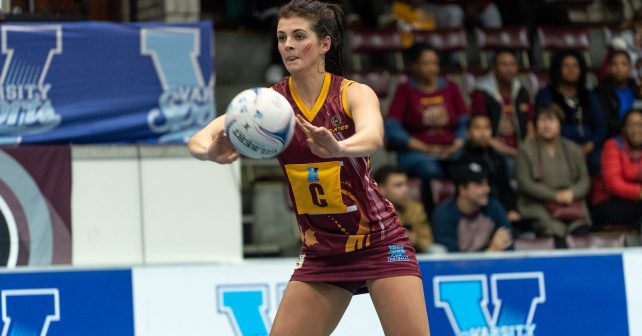 After a day of big scores and an even bigger upset the Maties knew that a victory would see them not only topple the only unbeaten side in the competition, but also potentially see them summit the Varsity Netball table if they scored enough goals.

The first score of the match belonged to the Maties and they quickly raced into a 5-1, then 8-1 lead. NWU narrowed the gap slightly but Maties again extended their lead to make it 17-8 after the first quarter.

Maties were again first to score after play resumed and kept the scoreboard ticking over at regular intervals while the veteran Stephanie Brandt and her co-defenders Alison Malgas and Caleigh Stuart kept the NWU goals to a minimum. This combination of strong attack and even stronger defence saw the Maties extend their lead to a big 16-goal margin and they went into the break at 31-15.

The third quarter saw the first power play being called and despite scoring two goals to one the NWU could not really narrow the gap and Maties were leading 39-20 after the two-minute power play period. The next target was to grab the bonus-point for going past the 50-goal mark and some sustained pressure and a few interceptions later the Maties were very close to their target, leading 48-21 after about 12 minutes gone in the third quarter.

They had scored 5 times in succession before NWU managed to grab a goal back, but then Maties went down the court and brought up their 50m before ending the quarter at 51-22.

It was the ladies in maroon who scored first in the final quarter and after using the power play well they had big 33-goal lead, very close to the 39-goal margin they needed to surpass the Kovsies goal difference at the top of the table. Both teams continued to score goals and the 33-goal margin remained unchanged as the final whistle saw Maties win 69-36. The win and the bonus-point sees the Maties top the 2018 Varsity Netball table.

Maties host Kovsies in what is shaping up to be the clash of the round while NWU know that they have to quickly regroup as they face the tough Madibaz in the early game on Monday afternoon. Maties know that a victory over Kovsies will see them continue to stand alone on the mountaintop, and backed by a fervent Coetzenburg crowd, expect them to come out guns blazing!