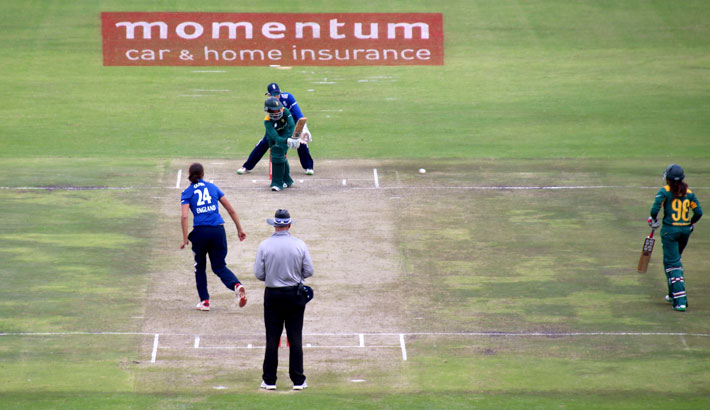 Momentum Proteas wicketkeeper Trisha Chetty is expecting a much-improved showing from South Africa when they face England in the second One-Day International (ODI) at SuperSport Park in Centurion on Friday.

The national women’s team were beaten by seven wickets on the Duckwoth-Lewis method in the first match of the three-game series on Sunday after a below-par performance.

The match was a first competitive one for the Momentum Proteas in close to 11 months and first at home since 2013.

Chetty refused to blame the limited game time the side had tasted recently for the defeat.

“I don’t think we were rusty, it was probably because it was the first game of the series and playing at home after such a long time, so nerves played a part in my opinion,” she explained. “I’m sure that will come off now and the girls will showcase what they can do in the next two ODIs.

“We may be 1-0 down, but that’s not going to stop us from trying to win the series. With two games to go, we believe we can do it. We’ll hopefully be much-improved in the next two matches.”

The opener was South Africa’s star performer in that game after recording a career-best 90 from 122-ball (9 fours) as the hosts were bowled out for 196.

They then allowed England, whose target was twice revised to 194 and then 150 due to rain, to ease to victory.

“I think with the batting we were short a bit, probably by around 30-40 runs, so that hampered us,” Chetty said. “With the ball, I don’t think we were on the ball early on and that’s where we let them get away. Not much came together for us.”

As for her own performance in the first game, she added: “I’m in good form and feeling really good about my batting. But obviously to get to 90 and then not convert is disappointing and sad.”

Defeat in that first game has meant that South Africa have now dropped to fifth on the ICC Women’s Championship. The top four sides at the conclusion of the competition automatically qualify for the 2017 ICC Women’s World Cup.

Photo 2 caption: With her insightful role as Momentum SA’s wicket-keeper, Chetty believes that SA have the BMT to take the fight to the visitors ahead of the second ODI encounter, at Supersport Park on Friday, 12 February. “We may be 1-0 down, but that’s not going to stop us from trying to win the series. With two games to go, we believe we can do it. Photo: gsport

Photo 3 caption: Opening bowlers Shabnim Ismail (pictured) and Marcia Letasoalo (above). Says Chetty: “I don’t think we were on the ball early on and that’s where we let them get away. Not much came together for us.” Photo: gsport