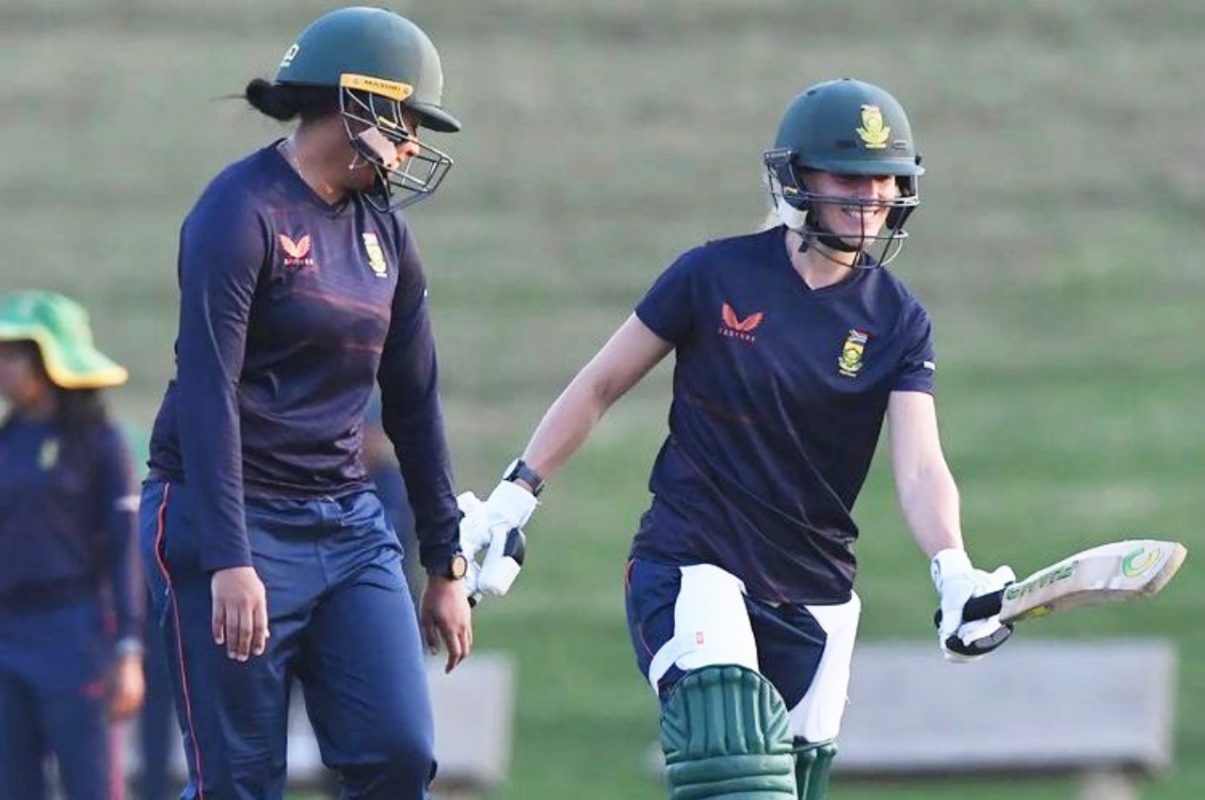 The Momentum Proteas remain in the driving seat in their three-day warm-up clash against England ‘A’ after the hosts produced a valiant reply to the visitor’s first innings score through Georgia Elwiss’ undefeated century on Day 2 at the Arundel Cricket Club on Wednesday, 22 June 2022.

At stumps, South Africa reached 140 / 2 after 40 overs, leading by 165 runs with Andrie Steyn (50*) and Lizelle Lee (28*) seemingly settled at the crease. England began the day’s play on 54 / 3 after losing three of the four top-order batters at the end of the opening day.

All-rounder Anneke Bosch (3 / 17) began where she left off from Monday evening as she bagged two quick scalps within a space of three overs to remove Danni Wyatt (8) and Lauren Winfield-Hill (0). Tumi Sekhukhune (2 / 27) then had opener Eve Jones (30) caught behind with just three runs added to leave the ‘A’ side with only four wickets in hand and still 225 runs behind.

That flurry of wickets brought Elwiss and Villiers to the crease shortly before lunch, as the pair began to rebuild the innings before upping the ante soon after the interval to bring their team back into the game.

Although South African captain, Suné Luus (1 / 35) eventually made the breakthrough to send Villiers back to the changeroom, Elwiss found able partners in Danielle Gibson (23), Freya Kemp (22) and Sarah Glenn (10*) to help launch the hosts to 276 / 9 before deciding to declare after Elwiss reached her hundred.

The other wicket-takers for South Africa included Marizanne Kapp (1 / 34) and Chloé Tryon (1 / 40). In their second outing with the bat, the Proteas Women lost the shero from the first innings in Laura Wolvaardt (10) early on before Lara Goodall and Steyn stabilized proceedings with a half-century partnership to propel the away side to 83 / 2, after the former was dismissed for 34.

An unbeaten third-wicket stand between Steyn and Lee worth 57 runs took the Proteas to 140 / 2 at the close of play, with a 165-run second innings lead going into the third and final day. The last day of the warm-up encounter gets underway from 11h00 local time (12h00 SA time) on Thursday, 23 June.

Photo 1 Caption: The Momentum Proteas remain in the driving seat in their three-day warm-up clash against England ‘A’ after the hosts produced a valiant reply to the visitor’s first innings score through Georgia Elwiss’ undefeated century on Day 2 at the Arundel Cricket Club on Wednesday, 22 June 2022. Photo: Anneke Bosch (Instagram)

← Bongi Msomi: “It’s My Responsibility to Guide and Groom the Next Generation” Banyana Banyana Land Safely in Morocco With 10 Million Reasons to Win AWCON →