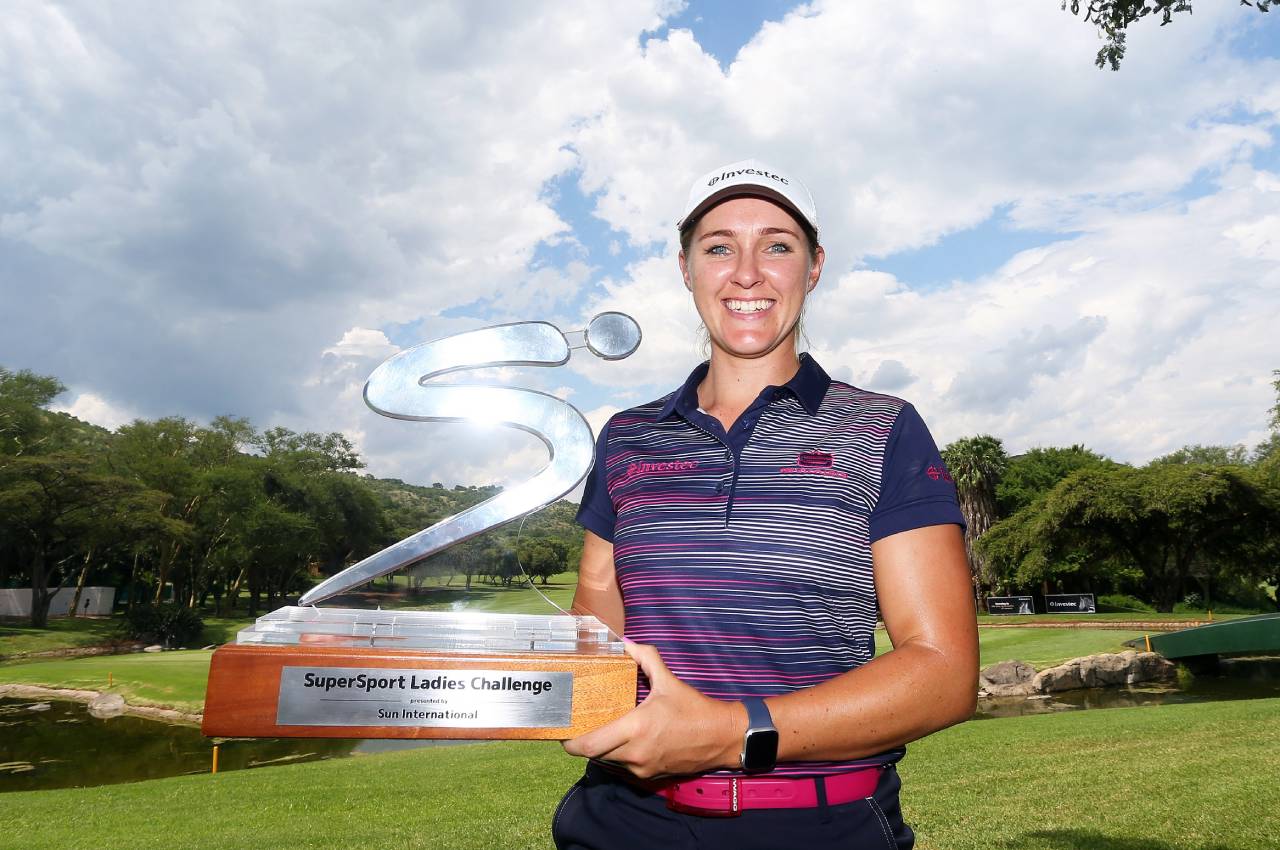 Lejan Lewthwaite drew on all her experience to clinch the SuperSport Ladies Challenge presented by Sun International title in a play-off against Tandi McCallum at Sun City on Thursday.

It was a fourth playoff success for Lewthwaite, after winning her maiden Sunshine Ladies Tour title last year at San Lameer in the SA Women’s Masters. That followed two victories on the men’s IGT Challenge Tour in sudden death against the male professionals in 2018.

“I absolutely drew on my experiences,” said the Investec golfer Lewthwaite, who birdied the first extra hole to lift her second Sunshine Ladies Tour trophy at the Gary Player Country Club.

“I don’t know what it is about playoffs, but it just fuels me to perform and stick to my guns. I’m over the moon to have four out of four playoff wins.”

The pair tied for the lead on six-under at the end of regulation play after Lewthwaite carded rounds of 66, 71 and 73 and McCallum shot 67, 71 and 72 at the challenging par-72 layout.

In the ensuing play-off, Lewthwaite was rock solid.

“The nines were switched around at the Gary Player, so we actually played the par five ninth in the play-off. Tandi drove it down the middle, and I hit my drive down the right. My ball was actually sitting down quite badly, but it was always going to be a lay-up,” said the Serengeti golfer, who celebrates her 29th birthday next week.

“I just wedged it out the rough, and she hit her second into the right rough. I went first with the approach and hit a solid wedge to about 10-foot. Tandi’s third came up short in the water. I holed my birdie putt to her bogey to take the win.”

McCallum fired four birdies in a row from the fifth during regulation play and had built a four-shot lead on 10-under after 12 holes. However, a costly double bogey five on 13, followed by bogeys on 16 and 17, dropped her back to six-under.

Lewthwaite, meanwhile, was steady with 15 pars, two bogeys and a birdie to retain a share of the lead for a third successive day.

“I actually tried my best to not watch them hit their shots. So that was quite a different approach I took on today which seemed to pay off. I thought three-under would have been a good score today, but a couple holes in, my caddy said that if I shot even-par, I’d be right up there. If I had shot level, I would have won without needing a playoff.”

Lee-Anne Pace, fresh off her 25th career win in the Cape Town Ladies Open, birdied the 17th and made an albatross at the final hole for a 69 to finish alone in fifth on two-under.

It was the first time Lewthwaite went wire-to-wire to win. She led the first round on six-under with Stacy Bregman and shared the 36-hole lead with Dlamini on seven-under after the first two days at the Lost City Golf Course.

“I’m very happy to have kept my lead. It was something new for me because I had never been in the lead of a tournament going into the final round. I was proud of the way I handled myself by keeping my nerve and staying patient,” she said.

The Ladies European Tour player said the win would do wonders for her confidence.

“There’s still a lot I want to achieve on the Sunshine Ladies Tour. I got my first win last year and now this one, but I really wanted to build on that. This one means a lot and the more wins you have, the more experience you gain, and you have more tools to draw on going forward.”

Lewthwaite will be looking to go one better than her runner-up finish last year when she tees it up in the R600 000 Dimension Data Ladies Pro-Am at George Golf Club, starting on Valentine’s Day next week.

“Then it’s back to San Lameer to defend my SA Women’s Masters title and then I’m going to try and win the new Canon Serengeti Par3 Challenge at my home course,” Lewthwaite said. “It’s an exciting new concept and it should be a lot of fun and highly competitive.”

From Serengeti the Sunshine Ladies Tour travels to Soweto Country Club for the R500 000 Joburg Ladies Open (26-28 February), followed by the R600 000 Jabra Ladies Classic at Glendower Golf Club (4-6 March) before the players head back to the City of Cape Town for the Investec South African Women’s Open at Westlake Golf Club from 12-14 March. The season-finale is co-sanctioned with the Ladies European Tour and carries prize money of €200 000 (approximately R4-million).

“Then I’m heading to the Royal Greens Golf and Country Club for the Saudi Ladies Championship on the Ladies European Tour, and then I’ll take a very hard-earned break,” Lewthwaite said.

Final Result:
All competitors RSA unless otherwise specified and amateurs indicated as AMA