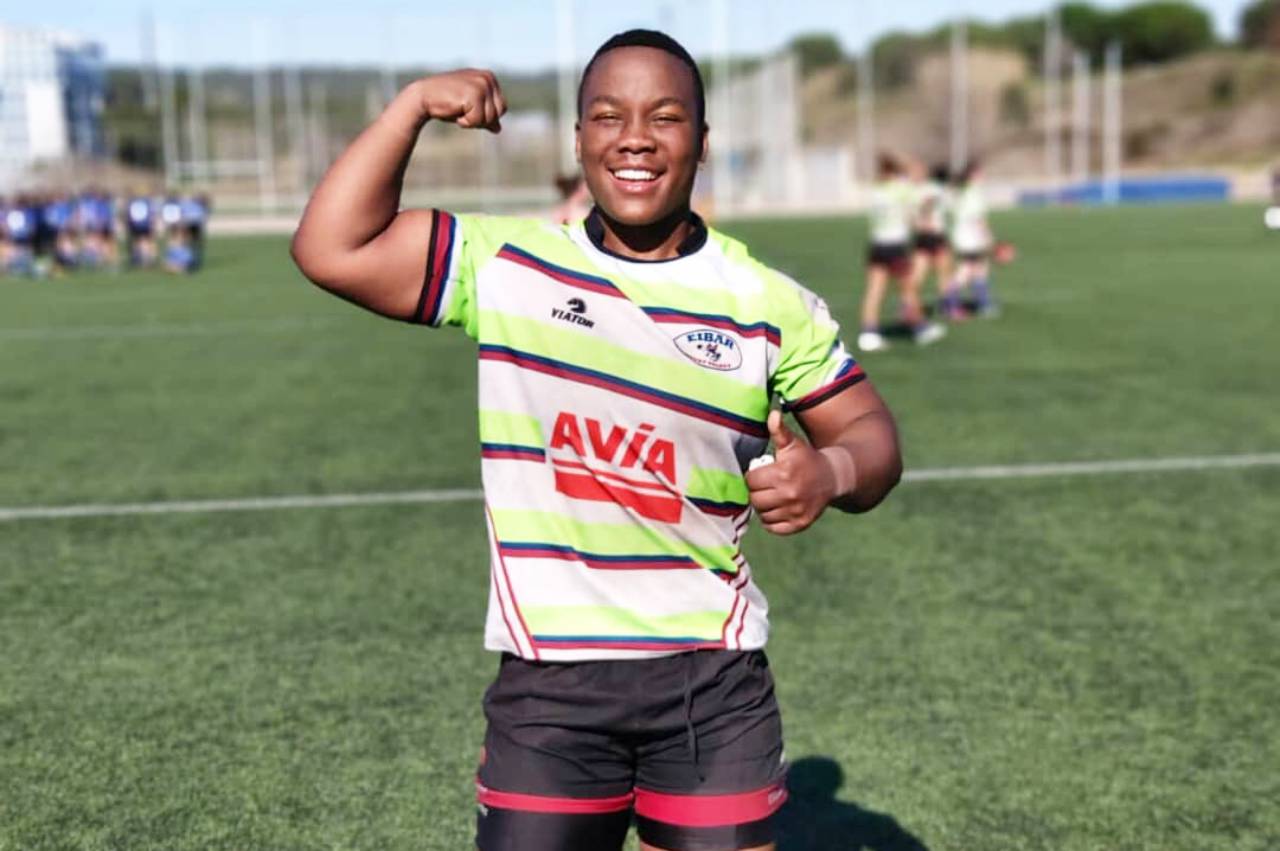 Babalwa Latsha Speaks on Her Career in Europe

In a short space of time, South African international rugby player, Babalwa Latsha, has made her presence felt in the Spanish rugby fraternity.

The Springbok Women captain joined Eibar Women’s Rugby club in the first week of January and has already found her place in the team’s starting line-up and has scored a total of ten tries to date.

As the hard-hitting player continues to fight her way through the ranks in her new surroundings, gsport’s Celine Abrahams, caught up with Latsha to found out more about her new lease on life in Europe.

Babalwa, how has it been accustoming to life in Europe after making the big move to Eibar Women’s Rugby Club in Spain?

I think I have adapted quite well to Eibar. It’s very different obviously from home. It’s winter here so it is extremely cold, but I think that I have adapted quite well; physically I am okay, so yeah, everything has just happened quite smoothly. It was quite a scary leap, if I may put it in that way, in my career. Leaving home, leaving what I am accustomed to and venturing out into a territory that is unknown to me. It must be done, so (laughs) as scary as it was, exciting and sad because I had to part with my family, but I think so far, I am having a great experience.

You were given a heart-warming send-off at the Cape Town International Airport. How did it feel to have had so much love and appreciation shown to you as you took this leap of faith into a new path of your career?

What a heart-warming send-off indeed! One of the things that I will never forget in my life. I am extremely grateful to everyone who came out and supported, especially the youth group from my church, some of the people that I coach at the church as well, and just friends and family. They just came out and showed love and bid me farewell. It was an extremely touching moment. I was struggling to hold back tears. Quite emotional and I am grateful to them. They made the journey a lot more easier knowing that there are people who wish me everything of the best, people who genuinely care and love me and what I am doing. Man, it was phenomenal!

What were your first impressions when you joined the team for the first time?

The team were very welcoming. The first impression that I got of them was that they are a very pleasant group and I felt almost at home. They are quite a young group, but they love the sport, they are very competitive, and it is generally an environment that a player wants to be in. Culturally, here people are very conservative and quite traditional. Also, quite affectionate! Team celebrations are hugs and kisses first instead of a high-five like we would do, so it is quite something new and something to embrace.

On the language side of things, how is your Spanish coming along?

Jeez, my Spanish is coming along well. No one speaks English here. When I say no one, I literally mean no one! It has been quite challenging and thank goodness for Google Translate that has been my bestfriend, ha, ha, ha, it has helped me a lot.

In your first game you managed to dot four tries and to date you have a total of 10. That must have been a major confidence boost for you!

It has been quite a confidence boost. The first four were the most critical ones because it happened in the first game and for me the first game was very important as it is where I had to adapt to the style of play but still remain true to my abilities, so I think that I have managed to do that quite well and I am having a good time. The first game was also an opportunity for me to prove what they saw back home is still the same thing that they will get here. I have ticked that box, so major confidence boost and it set the tone for the rest of the games.

Looking at the standard of rugby, has it been a case of you having to put in more work from your side?

When I look at the standard in all honesty, I can’t really say that I had to put in a whole lot more work or extreme amount of work. I have had the opportunity to polish my fundamentals as a prop, work a bit on my scrumming techniques and I have access to facilities here that can assist with those types of things. Look, rugby is rugby, wherever you go the methods are not fundamentally different from back home. If anything, back home we are a lot more physical. I have noticed that here physicality aspect is not as great which I think is primarily why I go scouted for this team in the first place to bring that forward momentum and to be able to have that extreme physical aspect rather than skills.

What have been the biggest lessons that you have taken away since being in the Spanish rugby set-up?

Being in the Spanish set-up has opened my eyes quite a bit to several things regards to the sport. I’ve been able to experience something different, bring something new with a different group of people who share the same passion for the sport as I do so I think that has also taught me to embrace new things within the sport. Not to think that I am accustomed to is right and I should stick to it, but I’ve learnt to become a bit more flexible and embracing of whatever is thrown at me.

When it comes to women’s sport in Spain, does it get the same recognition as the men’s side of the game?

One of the greatest things here is that women’s sport is closer to being on par with men in comparison to back home. Back home, we are eons away from the men. Here it is normal that men and women are on the same par or women’s sport and men’s sport be on the same par. For instance, here at Eibar, coaching staff both male and female are paid exactly the same, both male and female players are paid exactly the same, which was mind-blowing to me when I first heard about it because things like this don’t happen back home and it’s a sport that is well supported. In my club specifically, whatever is done for the males is done for the females and I was in awe as to how normal this is.

From what you have seen or heard from your peers, are sponsors as difficult to attain as it is here in South Africa when it comes to women’s sport?

Sponsorships are not that difficult to attain, in fact they are not difficult at all because the mentally here is what we can do for the men, we can do for the women. I think that is primarily why the Spanish team has been able to be at the Top 10 teams in the world for the time that they have in comparison to when they started. I stand to be corrected, but I believe that they started way later than we did but they have managed to build a system that works for them and that has gotten them to the Top 10. That stems from having sponsors and having male and female rugby players be on par. For me that was one of the most important things.

Having found some ground in your new surrounds, what are you hoping to achieve for the rest of the season?

The key thing for me for the rest of the season is to continue to put up great performances week in and week out, to keep improving as a player because the bigger picture is that I still need to go back home and represent my nation given the opportunity at the Rugby World Cup which is next year (2021), so for me at this point is to be consistent in my performances here at Eibar.

What advice would you like to give the South African players back home for them to follow in your footsteps?

What I would tell young female athletes or rugby player is that as cliché as this may sound but opportunity recognises hard work. No opportunity comes to anyone who sits and does nothing so keep working hard at what you love, at what you’re good at, whether it be sports or anything else. Just keep working hard, be the best that you can be, believe in yourself as much as possible and that will attract opportunities.