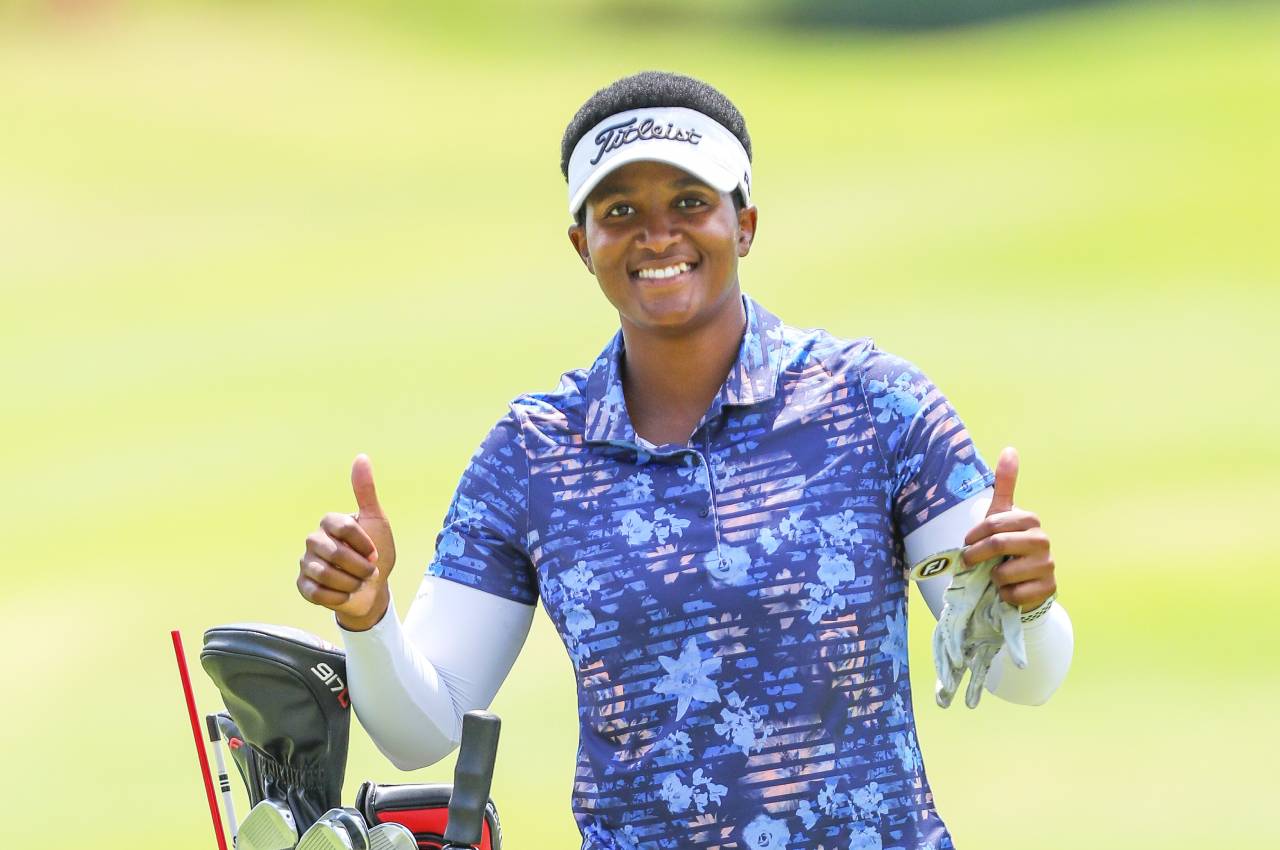 Dlamini Back in the Mix at Sun City

For a second successive week, Nobuhle Dlamini has a stab at a sixth Sunshine Ladies Tour title after she moved into a share of the 36-hole lead in the SuperSport Ladies Challenge at Sun City.

The 28-year-old Eswatini forged her way to the front in the R400 000 event presented by Sun International, courtesy of a flawless four-under-par 68 at the Lost City Golf Course on Tuesday, 4 February 2020.

The Eswatini golfer was joined at the summit by joint first round leader Lejan Lewthwaite, who held on to a share of pole position with a one-under-par 71.

Stacy Bregman and Nicole Garcia finished a further shot back. Bregman, the winner in 2015, shared the first round lead, but backpedalled to a share of fourth after carding 74. Garcia, meanwhile, shared the low round honour with Dlamini. Her 68 featured an eagle, a trio of birdies and a lone bogey.

Scotland’s Jane Turner celebrate her maiden win in this event when it was hosted at the Wild Coast Sun Country Club. She stayed in touch with a 73 to finish a further stroke adrift.

Dlamini led the season-opening Cape Town Ladies Open through 36 holes last week, but she battled a balky putter on the final day at King David Mowbray Golf Club and ended up losing to Lee-Anne Pace.

“I’m happy with birdies on three of the par fives and a bunch of solid pars, though, because the conditions were a lot tougher.” – eSwatini Golfer, Nobuhle Dlamini.

Although the flat-stick is still a little icy, Dlamini was pleased to sign for two bogey-free rounds.

“I hit a lot of fairways, but wasn’t hitting it close enough to make the birdie putt,” she said. “I’m happy with birdies on three of the par fives and a bunch of solid pars, though, because the conditions were a lot tougher.

“The wind was much stronger and lots of pins were tucked, so you couldn’t attack the flags. You couldn’t really feel the strength of the wind through the trees, but once you hit it, the wind played around with your ball. Playing in the wind in Cape Town was definitely a benefit for us, because we had to make a lot of adjustments out there.”

Dlamini landed her maiden Sunshine Ladies Tour win in the SuperSport Ladies Challenge at the Wild Coast in 2018, but she had a chance two years earlier, when she carried a four-shot lead in to the final round at Sun City.

“I started with a bogey and made nine on the par five second and I never recovered. I ended up shooting 77 for a runner-up finish. I’ve never forgotten that day and I would love to get my revenge,” she said. “I really enjoy the Gary Player. The course is slightly longer and you don’t have to lay up as much as you do here at the Lost City. I can use my driver. It’s a tougher course, but there are some very good holes where you can make birdies.”

Lewthwaite fired five birdies to offset a pair of bogeys, but was left ruing a double bogey at the par four 17th that cost her outright lead.

“I was three-under with two to play, so a little disappointed with the double, but I’m happy that I kept it under par,” said the Serengeti golfer. It was a tougher day, for sure, but I stuck with the same thought processes and just kept calm out.
“After the double I told myself to go for an eagle finish. I really went for my second shot. I had an uphill lie, though, and it went a little high and came up short in the hazard. I didn’t really have a shot, so I took the drop and almost holed it. I was happy to make the up-and-down for par,” said the Investec-backed golfer.

“Gary Player is a little tougher, so I’m sticking to my thought processes. The rough is up way more than here at the Lost City and positioning off the tees will be crucial. I’m really excited. The greens are a lot quicker so I’ll be happy get the putter going on that side.”

Second Round Scores:
All competitors RSA unless otherwise specified and amateurs indicated as AMA