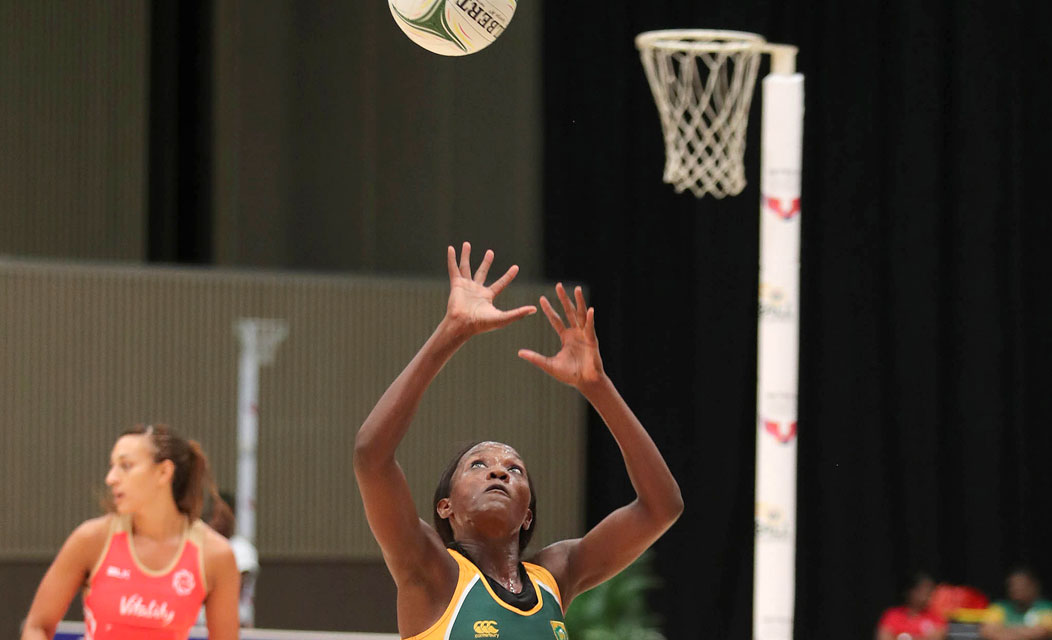 There was heartbreak for South Africa in their SANZEA Quad Series netball match against England at the Durban ICC Arena on Saturday.

After fighting back from a 11-goal deficit at halftime, the SPAR Proteas were level on 48-all at fulltime but the more experienced England team won the match 60-55 in extra time.

It was South Africa’s best performance against a top three team since 2013, when they beat a second-strong England team.

The SPAR Proteas started strongly, taking the early lead, and it took England 10 minutes to draw level on 7-all. They ended the first quarter 11-8 ahead, and by halftime they led by 28 goals to 17.

Shortly after the start of the second quarter, Proteas coach Norma Plummer brought Izette Lubbe on for Bongi Msomi at wing attack, and she replaced Renske Stoltz with Lindie Lombard at goal attack in the third quarter.

Lombard, who has been plagued with injuries, and has been in and out of the squad, brought new energy to the South Africans, who scored eight goals to one in the first four minutes.

Boosted by the vociferous support of the crowd, the Proteas won the quarter by 17 goals to 11 and in the fifth minute of the final quarter, they drew level at 40-all. From then on, the lead changed hands minute by minute. Just before fulltime, South Africa scored but the umpire ruled that centre Erin Burger’s knee had been over the line, and disallowed the goal.

Coach: I thought they were outstanding!

Plummer was delighted with the team’s performance and said it was a sign of how far they had come. “I thought they were outstanding,” she said.

“That 11-goal turnaround – you don’t often get that. We did actually have the game and then the umpire decided Erin’s knee was over the line. But it’s the first time they have taken a top three team into overtime, so you have to admire what they did.

“Lindie came on and she played a blinder. She brought us back into the whole match.”

Plummer said Australia would be another step up for the team, but South Africa had nothing to lose.

“We don’t want to play teams below us, we want to challenge the top teams,” she said.

England coach Tracey Neville said South Africa came out as hard in the third quarter as they had in the first.

“We weren’t expecting that, and I think we were too casual. We gave cheap ball away and we stopped driving, and you get crucified by any team when you do that,” said Neville.

“I think their two tactical changes were crucial. We didn’t adapt to that well. The wing attack helped get the ball into the top of their circle, and Lombard offered (goalshooter) Lenise Potgieter more opportunities.”

Earlier, the Australian Diamonds proved once again why they are number one in the world with a clinical 57-50 victory over the New Zealand Ferns in the opening match.

Australia stamped their authority from the start, and it was only in the fifth minute that New Zealand were able to score their first goal. The Diamonds led 16-10 after the third quarter and 30-23 at halftime.

With some outstanding shooting by Bailey Mes and the charismatic Maria Tutaia, New Zealand were able to reduce the deficit to three goals, but each time they did so, Australia came back to stretch the goal deficit again.

Australia won the third quarter 15-14, but with the crowd behind them, cheering every goal, New Zealand won the last quarter 13-12. Once again, New Zealand came within three goals of Australia, but each time they did so, Australia counter-attacked and surged ahead again.

Goal attack Susan Pettitt, making her first appearance for Australia in three and a half years, slotted seamlessly back into the team and was named player of the match for her performance.

“I have been working very hard and it felt really good to be on court for Australia again. I think we are doing well because we have confidence in one another.”

Australian coach Lisa Alexander said she was disappointed that they had lost the final quarter.

“We set ourselves targets and one of these is to win all four quarters. So we still have plenty to work on. But I am thrilled that we executed our plans so well against top quality opposition.”

Captain Sharni Layton said the vocal support for New Zealand had affected the Diamonds in the final quarter.

“We enjoyed the hype, but we know that it is going to be even more when we play South Africa on Tuesday. We know we will have to concentrate on our own game and not get caught up in the hype.”

Photo 1 caption: Coach Norma Plummer is delighted at the result of the first SANZEA Quad Series home match against the highly-rated English Roses, when the home team rallied back an 11-point deficit to equal the visitors at the full-time whistle, before going down 55-60 in Extra time. Pictured in action is SPAR Proteas skipper Bongi Msomi. Photo: Reg Caldecott

Photo 3 caption: “That 11-goal turnaround – you don’t often get that,” enthused coach Norma Plummer. “It’s the first time they have taken a top three team into overtime, so you have to admire what they did. Pictured are Jade Clarke (right) of England Roses and SPAR Proteas Erin Burger in action at the Quad Series in Durban at the ICC. Photo: Reg Caldecott

Photo 4 caption: The SPAR Proteas will face the world no. 1 side Australian Diamonds on Tuesday, after they saw off the New Zealand Silver Ferns 57-50 in their series opening match, also on Saturday. Photo: Reg Caldecott