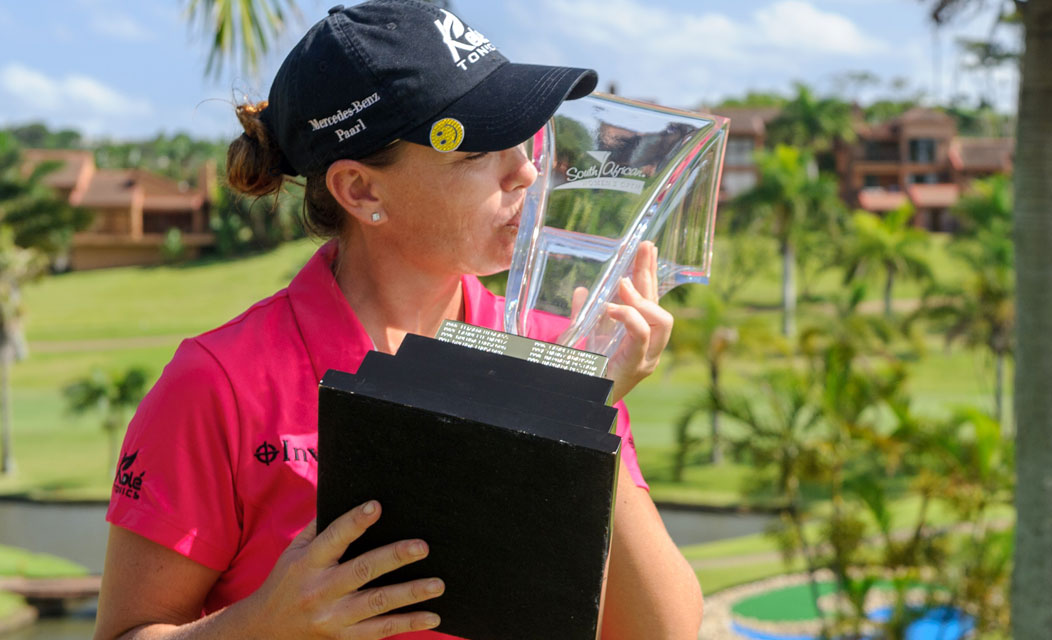 The final round stage at San Lameer Country Club belonged to Lee-Anne Pace, who marched to a historic SA Women’s Open hat-trick on Saturday.

An overnight lead of six strokes proved insurmountable for the chasing pack, as Pace put on a class act on another windswept day on the KwaZulu-Natal South Coast layout.

She shrugged off an early charge from compatriot Stacey Bregman and went around the layout in 72 strokes, to close out a run-away seven-stroke victory over Ashleigh Simon, on eight-under-par 208.

In raising the trophy for a third successive year, Pace wrote her name in the South African golfing annals as the first three-time winner of the national championship.

“Mission accomplished,” Pace said through a beaming smile. “I could stand here and hold this trophy forever.

“Ever since I won for the second time, I dreamt about this moment, and to own a little piece of golf history in my home land is priceless.”

Pace claimed her first title in 2014 and joined former champions Brenda Lunsford and Barbara Pestana as a double winner with back-to-back victories on the 2016 Sunshine Ladies Tour.

Knowing that she had a chance to become the first three-time winner, the Paarl golfer re-arranged her LPGA Tour schedule when the national championship was moved to January, to form part of this year’s Sunshine Ladies Tour.

“It has always been important to me to come home and support the Sunshine Ladies Tour,” said the three-time Chase to the Investec Cup for Ladies champion. “I was going to play Hawaii, but when I heard the SA Women’s Open date moved, I changed my LPGA Tour schedule so I could go for the hat-trick.

“I always wanted to put my name on the SA Women’s Open trophy and it was pretty special when I won it for the first time. To win it three times is something I am incredibly proud of. To do it with so many people out there supporting me was really fantastic.”

Pace laid the foundation for her hat-trick with an opening six-under-par 66, but said the last two rounds were tough.

“The windy conditions in the last two days made it really tough and it certainly tested our patience,” Pace said. “You had to keep your wits about yourself and play a very patient game. It got a bit tight on the front nine when Stacy birdied six and I dropped a shot.

“That cut my lead to three shots, but I hung in there and once I made birdie at the 12th, I could relax a little and enjoyed the crowd. It was so great to have so many people walking with us and it added so much to make this a very memorable moment.

“There is one big champion of the SA Womens’ Open that we have to thank and, on behalf of all the players, I want to applaud mayor Nomusa Mqwebu and the Ray Nkonyeni Municipality. They have stuck by us for the last five years and they have given us a fantastic championship every year. If nothing gets in the way, I’ll see you all back here at San Lameer next year.”

If Pace was the main act of the day, Woo Ju Son definitely deserved the best supporting award.

The reigning number one junior returned rounds of 74, 73 and 78 to tie for ninth with professionals Monique Smit and Ivanna Samu at nine over 226, and the top-10 finish earned the 15-year-old from Country Club Johannesburg the Jackie Mercer Trophy as the leading amateur.

Photo 1 caption: “Mission accomplished,” said the 2017 SA Women’s Open champion Lee-Anne Pace said through a beaming smile. “I always wanted to put my name on the SA Women’s Open trophy and it was pretty special when I won it for the first time. To win it three times is something I am incredibly proud of.”  Photo: Justin Klusener

Photo 2 caption: Pace proved once again that form is temporary, but class is permanent when she capitalised on a blistering start to take the first round lead in the SA Women’s Open on Thursday, when she shot a six-under-par 66 to open up a two stroke lead over Monique Smit. Photo: Justin Klusener

Photo 3 caption: Word was out that Pace was upon a historic hat-trick after she carded a two-under-par 70 in windy conditions to move to eight under on Friday, five shots clear of Stacy Bregman and leading England’s Kiran Matharu by six strokes. Photo: Justin Klusener