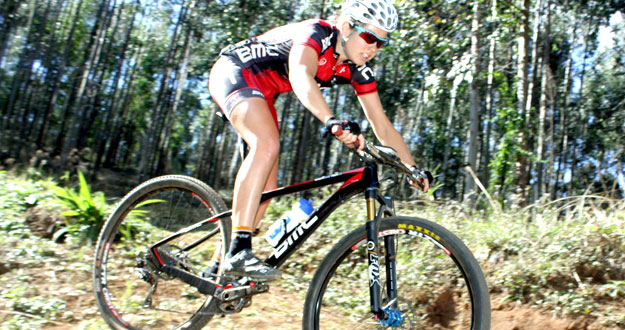 Having been identified by SASCOC as one of the country’s leading Rio 2016 Olympic Games potential medal challengers, Neethling was select to compete in London in 2012 where she gained invaluable experience racing against her elite rivals despite still only being in the Under 23 age group.

Since then Neethling suffered a tough first half of 2013 however the young star whose future seems bright has started to find the form she would be happy with and will now look to throw her hat into the ring of World Champs top five challengers.

“I felt I had a tough time getting into the season at the start of the year. The loss of Burry (Stander) was hard for all of us who knew him and that really put me on the back foot at the beginning of the year but I feel I’ve progressed nicely in the last little while, just in time for the World Champs,” explained the Western Cape based competitor.

“I feel I have a lot more energy this year than I did this time last year too, so hopefully I can just give it my best shot in Maritzburg in a couple of weeks’ time.”

Neethling spent much of the first half of the season tackling some of the tough European legs of the UCI MTB World Cup series where, being a little off her normal game, she battled to claim the results she had hoped for, but managed to return somewhat battle-hardened from the clashes.

“Racing overseas is just so different to racing on the local circuit, and no-one here will ever really understand the overseas level and racing style, until they’ve competed over there themselves.

“Europe is the hub of cross-country racing, so the standard there is the highest. The Europeans are just so used to having to fight for every single position they want, so that cut-throat racing culture is one they grow up with and are used to even as youngsters.

Fortunately for Neethling she wasn’t alone in the U23 women’s field overseas, as she enjoyed good company from fellow local talent Mariske Strauss, for whom 2013 has been a year of tremendous growth and success.

Strauss, having signed for pro team Orange Monkey at the start of the World Cup season, has earned some impressive results this season and the battle between her and Neethling has been a fascinating one to watch both locally and abroad.

“The competition between Mariske (Strauss) and I has been fierce this year here at home and overseas, but I think it has been really good for both of us,” said Neethling.

“With us being really close together now as far as our racing level goes, we’re constantly pushing to do better individually and hence the other then pushes harder too in order to keep up or get ahead and so we both have gained a lot.

“She and I often beat the elite ladies and I think that competition between us can only be healthy, and hopefully together we can try set a new standard for ladies mountain biking in South Africa.

“It’s also great to have another South African rider up there when we compete internationally and in the mix, and Mariske has had a phenomenal season, and hopefully she goes well at World Champs too.

Neethling is looking forward to the rare opportunity of competing on the largest MTB stage in her own country, and believes her local knowledge of the track – albeit a little rusty, puts her in good stead ahead of the clash.

“It’s really great that they are the ones that have to travel this time around. If we make sure we use this huge advantage properly then I really think the South Africans can do very well at this year’s World Champs.

“I’ve raced at Cascades a lot. I’ve done World Cups, nationals and many other races here and even though I haven’t been to the track in a while, I feel I know this course really well and its just a matter of refreshing the memory again.

The science behind a modern day athlete is endless and finding the perfect balance of all variables is what every competitor seeks. For Neethling resisting the temptation to over train in the final phase before the event and ensuring she remains fresh is her greatest challenge as the international challenge draws nearer.

“Being properly prepared is definitely crucial, especially with the level of competition at the front of the field these days, however I think a lot over do things a little in the month before Worlds because they worried they haven’t prepared enough beforehand and in fact lose their sharpness come race day.

“For me it’s all a matter of trying to get the balance right between training on the course, which is also crucial, but them also making sure I’m properly rested.”