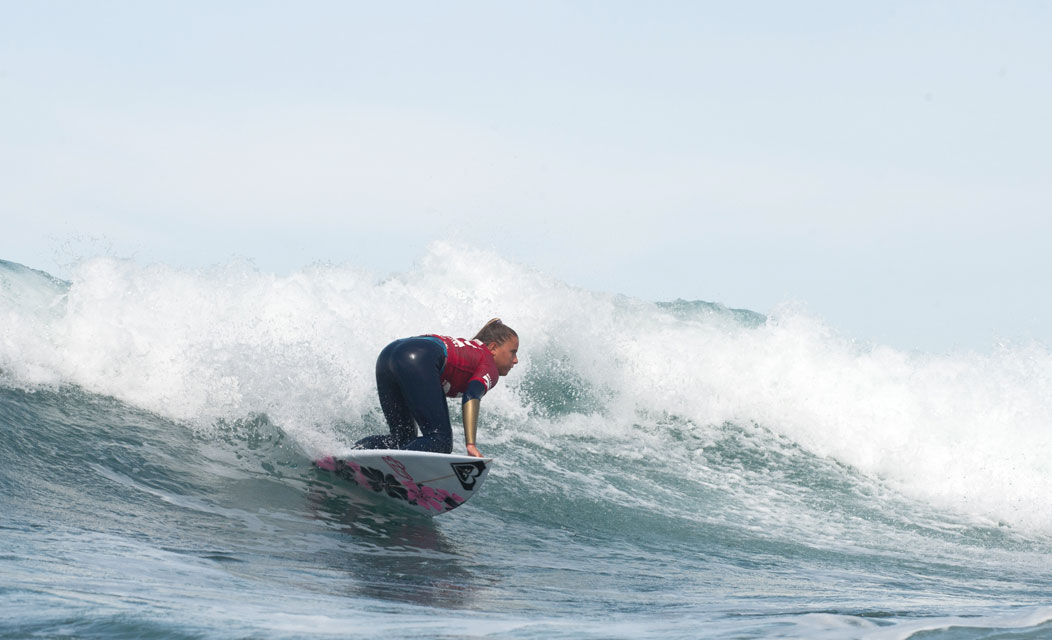 Kayla Nogueira turned the tables on fellow Durbanite and defending champ S’Nenhlanhla Makhubu when she clinched the U16 Girls crown in the Billabong Junior Series presented All Aboard Travel, at Loch Ness in Port Elizabeth on Sunday.

The first of four surfing events – that will crown champions in five age divisions for the 20th successive year in October – was held in good waves at the Pipe in Port Elizabeth on Saturday, before small waves and onshore winds saw organisers move to the open ocean ‘wildside’ where the finals were completed in tricky head-high surf.

Qualifying for both the U16 and U14 events and winning both, Nogueura came out tops in the main battle when she claimed the winning points on the last ride of the final to win the tightly-fought duel.

Nogueira’s second title saw her dominate the U14 Girls division, winning each heat she contested including the final where the Durbanite finished in front of Lisa van Heerden (Strand) and Aimee du Preez (EL).

Caroline Brown (CT) incurred a priority interference penalty that saw her lose one of her two counting rides and she dropped from second to fourth place.

The U12 Girls result was also affected by an interference call that saw Lisa van Heerden relegated to second spot behind winner Zia Hendriks, with Emma Bedser and Luanne Hurst collecting third and fourth places.

Final Results of the Billabong Junior Series presented by All Aboard Travel, Event #1 of the Series in Port Elizabeth on Sunday, 26 March, 2017:

Photo 1 caption: Kayla Nogueira was in top form at Loch Ness in Port Elizabeth when she clinched the U14 and U16 Girls crowns in the Billabong Junior Series presented by All Aboard Travel on Sunday. Photo: Kody McGregor

Photo 2 caption: Defending champion S’Nenhlanhla Makhubu went toe-to-toe with fellow Durbanite Nogueria, but had to settle for silver in the first of four events in the 2017  Billabong Junior Series. Photo: Kody McGregor

Photo 4 caption: Kayla Nogueira (right) dominated each heat she contested and easily won the U14 division in front of Lisa van Heerden (Strand) and Aimee du Preez (EL), with Caroline Brown (CT) dropped from second to fourth place after incurring a priority interference penalty to lose one of her two counting rides. Photo: Kody McGregor