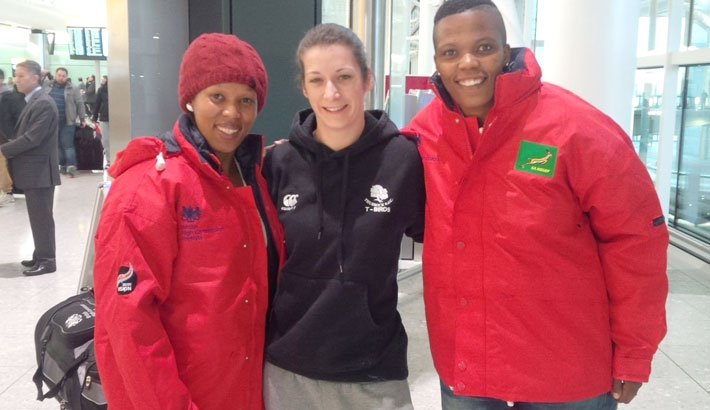 The players departed for London last Friday and arrived on Saturday where they were welcomed by new teammate Rebecca Francis. They will play their first match for the club on Sunday against Hove.

Nojoko, who participated in her third IRB Women’s Rugby World Cup in August in France, and Vazi, who burst onto the Springbok Women and Bok Women’s Sevens scene last season, added their names to a select list of players who have benefitted from the South African Rugby Union’s International Exchange Programme in the last few years.

Mayongo capitalised on this experience immediately and is now employed as a development officer at the Griffons Rugby Union in Welkom.

Nojoko and Vazi were delighted about the opportunity, especially after witnessing England secure a convincing 21-9 victory against Canada at Stade Jean Bouin in France in the IRB Women’s Rugby World Cup final in August and they both hoped to gain valuable experience from the programme on and off the field.

Nojoko and Vazi are no strangers to London as Nojoko participated in the 2010 IRB Women’s Rugby World Cup, while both players were members of the Springbok Women’s squad that travelled to London and France on the team’s World Cup warm-up tour earlier this year.

“It is a privilege to receive this opportunity to learn more about English rugby and culture,” Nojoko said from Essex.

“It is also good to experience the team culture and the way they do things. Five players of England’s Women’s Rugby World Cup-winning squad play for this club, so hopefully I can learn a few things from them.”

Vazi was equally excited about the opportunity and said: “The rugby structures in England and their style of play is vastly different to that which we are used to in South Africa, so this is a fantastic opportunity.

“Hopefully this will boost the quality of my game and allow me to grow as a person off the field,” said Vazi. “With England being the world champions, I believe playing club rugby here will benefit me immensely, so it is an honour and privilege to be part of this programme.”

The players will return to South Africa in March.

Photo 1 caption: Vuyolwethu Vazi (left) and Zandile Nojoko (right) being welcomed in London by new Thurrock Rugby Club teammate Rebecca Francis on arrival at Heathrow, in the United Kingdom, at the start of a four-month rugby exchange programme. Photo: Supplied