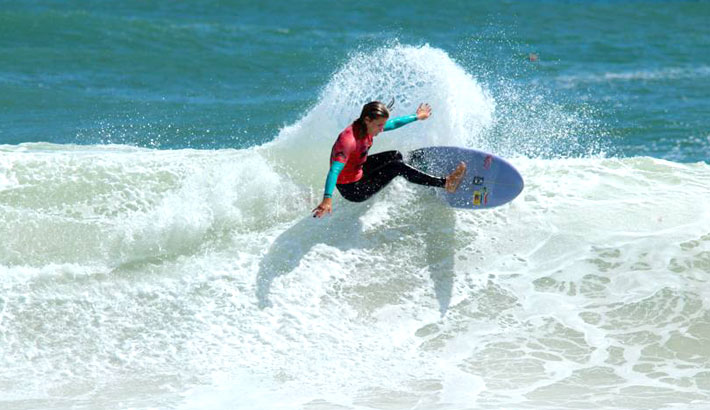 Faye Zoetmulder of Seal Point won the Open Division title in the Billabong Women’s Summersurf Challenge which was completed in 2-3 foot surf at Long Beach in Kommetjie on Sunday, 16 November, 2014.

Zoetmulder spent most of the heat in second place behind Tanika Hoffman of Hout Bay, but edged ahead in the dying minutes to take the victory, the bulk of the 2A Pro Surf Tour points on offer and a cheque for R4000.

Tarryn Chudleigh of Kommetjie was third and Nikita Kekana of Kalk Bay took fourth place in the Final.

Zoetmulder and Hoffmann will leave for China on Wednesday as part of the South African team that will compete in the ISA China Cup in Riyue Bay, Hainan Province.

Honours in the U20 Division went the way of Anoush Zakarian of Melkbosstrand with the talented Jade Mets of Ballito taking second place ahead of Crystal Hulett of St Francis.

Sophie Bell of Umdloti will count her long trip from KZN to the Western Cape a success, winning both the U16 and U14 titles at the event.

The SA Under 15 Champion beat fellow Umdloti surfer Cana Foster into second place in the U16 Division, with Pippa Jones taking third and Michelle Verreynne of Victoria Bay ending in fourth spot.

In the U14 final, Bell overcame an interference penalty to take the win ahead of her good friend Olivia Izzard, of La Lucia. Sarah Ingram of Constantia was third and Nina Harmse of Herolds Bay was fourth.

The Billabong Women’s Summersurf Challenge is the only stand alone women’s event held in South Africa and is run for women by women.

It attracted an entry of 41 surfers from all along the South African coast, and despite having to cope with tough Long Beach surf and bad mannered non-contestants on Day One of the competition, all of the participants acquitted themselves with dignity and style.

The same could not be said for the disrespectful surfers who spent the better part of Saturday intimidating the contestants in their heats. This selfish behaviour left a sour taste in the mouth of the majority of the people at the event, and embarrassed Surfing South Africa.

It was a slap in the face of the sponsors and the organisers, and was a disgraceful display of bad behaviour by a disrespectful minority.

Heart warming support from local longboarders and surfers on the final day of competition saw the Women’s event concluded in smaller but less hostile conditions.

The Billabong Women’s Summersurf Challenge was presented by Surfing South Africa and supported by a grant from Sport and Recreation South Africa. The application for the event to take place at Long Beach was granted by the City of Cape Town.

Surfing South Africa is the governing body for the sport and is a member of the South African Sports Confederation and Olympic Committee (SASCOC) and the International Surfing Association (ISA).