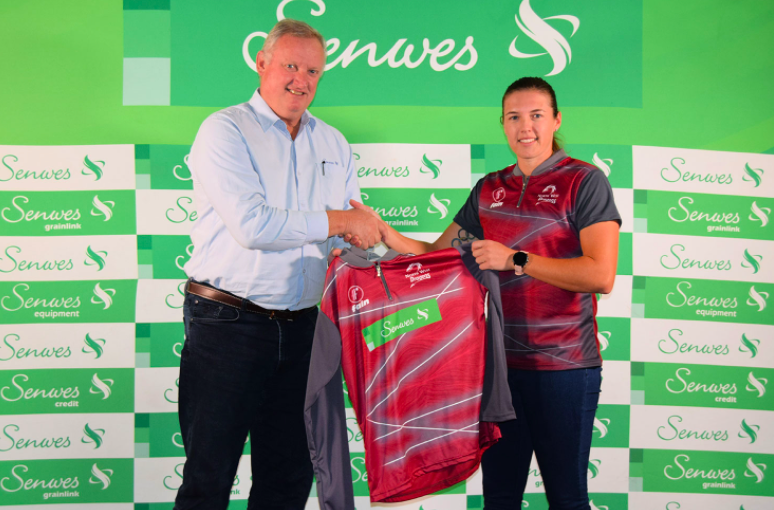 Senwes has extended their corporate partnership with North West Cricket – and more so with the Senwes Dragons Women’s cricket team, for the 2021/2022 season.

In an event held at the Senwes Head Office in Klerksdorp, Senwes welcomed the Senwes Dragons Women’s team to hand over the 2021/2022 season’s kit. This event officially launched the new season for the team.

The partnership between North West Cricket and the Senwes Group goes back several years, covering team, home ground and development programmes. The continued and dynamic partnership also allows the partners to venture into new and exciting programmes to further enhance and impact the sport and the broader community.

Francois Strydom, CEO of the Senwes Group said: “This sponsorship is about so much more than mere financial support. It is a way in which we plough back into the communities and interact with our stakeholders. As an agri-business we are part of the integrated agricultural value chain and Senwes strives to make a worthwhile impact in the more than 300 rural towns in which we conduct our business. These towns and communities represent the very fibre from which our country is made up and as such also serves as the basis from which we will build a sustainable and resilient future.”

Strydom also highlighted the importance of developing well rounded and balanced citizens, who will excel not only in sport, but in life in general.

North West Cricket prides itself in developing a stronger women’s pipeline and together with the Senwes aims to relaunch the Senwes Spinners Programme for farm school development and bring to the fore the girl child.

The Senwes Spinners Programme has been around for more than 10 years and CEO, Francois Strydom, describes it as a programme that was developed to keep families together. “We saw the struggle of how the farm parents had to move their kids to their relatives in the townships for better opportunities and had to find a way to fill the gaps in the farm education system including sport and healthy meal elements,” said Strydom.

North West Cricket CEO, HP Prinsloo, said: “We have a very strong and competitive pipeline, with girls from the hub system in the team as young as 13 years. Six of our players are still at school, with the matriculants unable to join us today.”

“It is exciting times for women’s cricket all around the country, as Cricket South Africa (CSA) aims to professionalise women’s cricket, and partnerships like the one with Senwes will ensure a sustainable team going forward”, concluded Prinsloo.

Prinsloo thanked Senwes for their partnership, noting how the sponsorship increased morale amongst the team members and has motivated the team to continue to perform even better.

The Senwes Dragons Women’s team attended the event and expressed their excitement for the upcoming season, and their hopes to represent the Momentum Proteas in future and competing in the ICC Women’s World Cup next year.