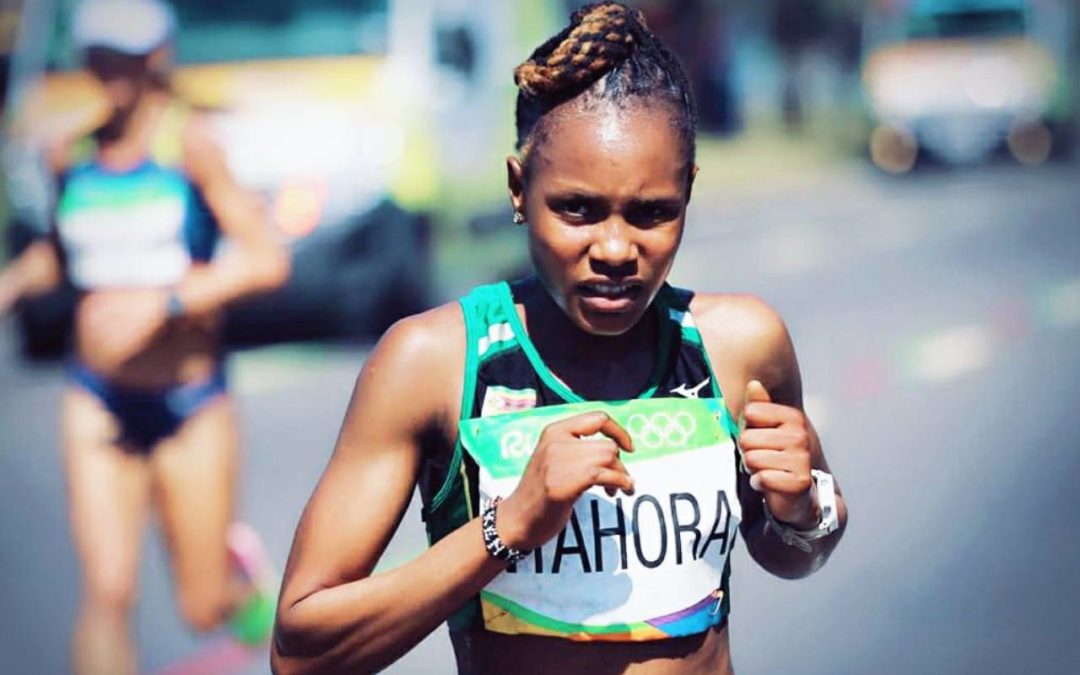 Rutendo Nyahora’s goal of qualifying for her second Olympic Games has been put on hold, but it has not dented her hopes of representing Zimbabwe when the event takes place in 2021.

Due to the global COVID-19 pandemic, the marathon runner’s preparations were abruptly put on hold, after she had invested hours into working on herself to qualify for her second Olympics.

On a positive note, Nyahora has another year under her belt to fight for her place as she has until next year to secure her spot in Tokyo, Japan.

The Olympics have always been a dream of Nyahora’s since she developed her passion for running in her schooling days.

She was the best athlete at school level and followed her heart’s desire to take running as her career path.

She went on to form part of the biggest ever team of Zimbabwe to qualify for the Rio 2016 Olympics after her maiden international race at the Vienna City Marathon where she finished a commendable ninth place, within the qualifying time.

As a full-time runner, Nyahora draws inspiration from other athletes who come from African countries and are able to leave a mark on the global stage.

Speaking with Celine Abrahams, Nyahora recalls her first international race and shares advice to aspiring sportswomen who are facing difficulties.

Rutendo, welcome to gsport, it is great to speak to you! How has COVID-19 and the lockdown impacted you?

The COVID-19 came at an unexpected time since I was looking forward to qualifying for my second Olympics. Unfortunately, after long preparations, events had to be cancelled with immediate effect due to this global pandemic.

How are you keeping fit during this time?

I’m keeping myself in shape by exercising indoors and outdoors since we are only allowed to train around a radius of 5km where we are residing. Some days I do aerobics in the yard and some days I go for light runs on the street to keep my mind and body strong.

Your name is engraved in history books as you were part of the biggest ever team of Zimbabwe to qualify for the Rio 2016 Olympics. How does it feel knowing that you were able to achieve this feat?

Rio 2016 Olympics was a dream come true. Since I started my running career the Olympics was one of my goals where I wanted to see myself at the starting line with the best athletes in the world and I managed to achieve that – I’m proud of myself!

Tell us more about your maiden international marathon race where you finished a commendable ninth place in a time of 2 hours 39 minutes 58 seconds to become the first local female runner to qualify for the Olympics.

Vienna City Marathon is one of the marathons that I will never forget in my running career I always achieve a PB and a qualification time when I participate there. 2016 Vienna City Marathon was my debut marathon, I was nervous of the distance because it was my first time running that distance.

“I ran the whole race holding myself and trying not to hit the wall until I finish and was shocked to see when I crossed the finish line and the clock was 2:39:58 inside (2:45:00) which was then an Olympics qualification time.” – Zimbabwean Marathon Runner, Rutendo Nyahora

I didn’t know if I was ready for the marathon! I ran the whole race holding myself and trying not to hit the wall until I finish and was shocked to see when I crossed the finish line and the clock was 2:39:58 inside (2:45:00) which was then an Olympics qualification time. After the race I felt like I could have run even faster but because it was my first, I was happy to achieve the Olympics qualification.

It’s an unforgettable experience and highlight of my career. I was inexperienced and I managed to stand shoulder to shoulder with best athletes in the world. It gave me courage that I can be one of the best marathon runners in future.

When did your passion for running develop?

I had a passion for running from school since I was the best athlete in school athletics. I then chose to follow my heart and passion…

I am a full-time athlete! I focused on my running career since I believe that sports can change someone’s life. Every morning when I wake up, I think about my goals and they keep me going.

What would you say are your biggest highlights so far?

The 2016 Rio Olympics and 2017 London World Championships, these are the biggest highlights of my career because to be part of these championships I had to sacrifice a lot to achieve the qualification criteria.

Helene Obiri, Kenyan track athlete. She is a fighter during her races, she doesn’t easily give up and it motivates me to work hard like her.

What inspires you and how do you lift yourself up when you are down?

“I have faith that one day I will be a champion.” – Rutendo Nyahora

It gives me courage even though sometimes there are ups and downs with my performances; I have faith that one day I will be a champion.

What are your thoughts on women’s sport?

Women’s sport is growing and now women can compete against one another, for instance, we have our own SPAR Ladies Race Series where women are enjoying themselves and elite athletes are racing against each other. This shows that things are getting better for us.

What changes would you like to see taking place within women’s sport and how it is viewed?

I wish that one day corporates and other business can invest more in athletics as we are trying hard to get our careers to the next level and achieve our dreams. We need more financial support like other European countries that support women to achieve their dreams.

What is your advice to aspiring sportswomen who may be facing challenges as they chase their dreams?

To all women out there who want to make their dreams come true I would like to say they must not be afraid to take risks! Every risk you take is worth it, it’s either you achieve from it or not but at least you tried your best.

Never give up, never look down and never look back. Always move forward in life. Don’t let anyone make you feel as if you don’t belong or unworthy of…ever! Those that do are just not strong enough to handle such greatness. Be proud of who you are. Always walk with your head high, you are never alone.

Photo 1 Caption: Rutendo Nyahora’s goal of qualifying for her second Olympic Games has been put on hold, however it has not dented her hopes of representing Zimbabwe when the event takes place in 2021. Photo: Supplied