‘One Little Girl’ Paves the Way for Others 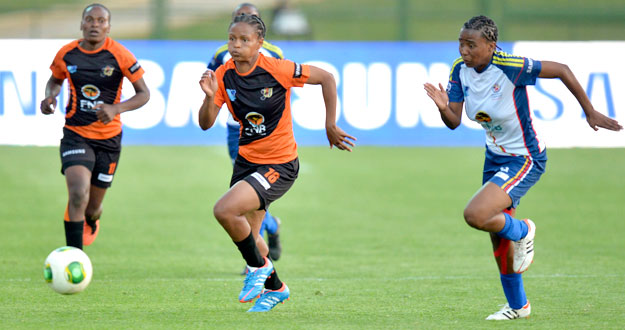 Fresh from the University of Johannesburg’s triumph in the inaugural Varsity Football competition, Amanda Dlamini spoke about her decision to relinquish the national captain’s armband and her work in the development of women’s soccer.

In March, the Banyana Banyana midfielder gave up the captaincy, after two years at the helm, to focus on her own game and her tertiary studies.

“It was one of the toughest decisions I had to make regarding my footballing career. It’s something that needed to be done for me to be content with myself, my game and my studies.”

Higher education was a priority, said the third-year Road Transport Management student, even for those young women carving out a career in professional sport.

“Women’s sport still lacks the sponsorship needed to make a good living. So should anything happen, such as a career-changing injury, one should be able to continue having a full life through your chosen field.”

Dlamini is currently back home in Harding, KwaZulu-Natal, while she completes a module via correspondence, and plays for Durban Ladies in the Sasol provincial league.

She has already made 66 appearances for the national squad, and has notched up 21 goals in the process.

The highlight of her tenure as captain was leading the first ever Banyana team to qualify for the Olympic Games in 2012.

She hopes to still be an integral part of South Africa’s plans to qualify for the 2015 Fifa Women’s World Cup and their quest to win the African Women’s Championship.

Earlier this year, this sporting role model established the Amanda Dlamini Girls’ Foundation, which aims to inspire young girls from rural areas to pursue their dreams.

“As a rural girl, I know how it feels to be isolated from all sporting activities. Because I have experienced these challenges, I felt the need to go out there and motivate these young girls not to give up, no matter what.”

As part of the programme, Dlamini shares her footballing experiences and some of the challenges that female athletes face. She said the emphasis was on balancing education and sport, providing coaching in life skills and football.

“We offer career guidance and teambuilding exercises. There’s also something called ‘my sacred space’ – which is where I tell them about my upbringing and relate to them and answer one-on-one questions.”

Dlamini, who scored two goals in UJ’s 6-0 drubbing of Tshwane University of Technology, believes it was depth of experience that gave her side the edge in the Varsity Football competition in September.

Although the presence of past and present national players like herself, Noko Matlou and Disebo Mametja had no doubt strengthened the side, she preferred to focus on the entire unit.

“We work as a team and shy away from focusing on individuals. We work very well as a unit and not as a group of stars. We are always mindful of complacency and therefore work hard at training sessions to complement the massive talent we have in our squad.”

The 25-year-old said the Varsity Football series had added great value to the game by ensuring constant competition and providing a visible and equal platform for women’s football.

“This shows that women’s sport as a whole is on the rise and being taken seriously.”

Dlamini’s greatest ambition is to one day have her own football academy for women. According to her, her own start was slightly less auspicious, following her cousin and brother to the fields where they played.

“One day I was asked to play because they were a man short and I grabbed that chance with both hands. At first it was just a hobby – little did I know the only little girl playing with boys would one day get this far.”