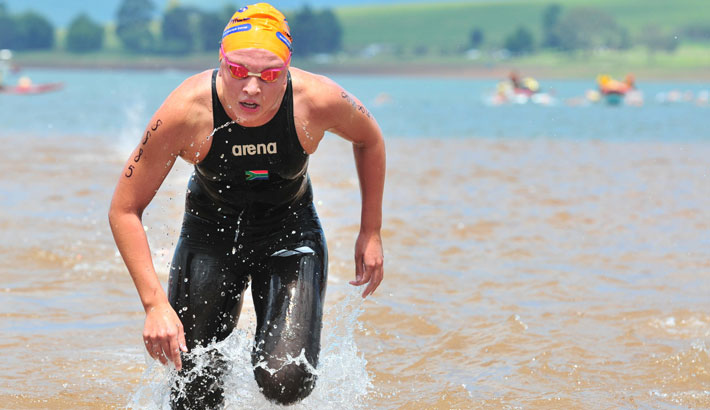 Trials and tribulations have haunted talented Durban-based long distance swimmer, Michelle Weber throughout her life and whilst these obstacles have been difficult to overcome, Weber recently cast them aside as she qualified for the 10km open water swim at the 2016 Rio Olympic Games.

Having become the first South African woman to win the aQuellé Midmar Mile women’s race in 13 years in February, there was little doubt that Weber was a world beater heading into the recent FINA Marathon Swimming Olympic Games Qualifying Tournament in Portugal this past weekend.

“I cannot believe that I have qualified for the Olympic Games!” an elated Weber mentioned on her return to South Africa. “It is still sinking in that I am going to my first Games and I am just so stoked that all went according to plan.”

“The international girls are really tough and strong and there is always a chance that something could go wrong during the race which would mean you are out of contention, so I am just really happy that I had the perfect race.”

The past three years have been a challenge for the Umhlanga resident after a debilitating heart problem forced her to give up swimming for two months while also having to face various other testing obstacles throughout her young life.

“My mum has had cancer three times and has just finished chemotherapy and is about to start radiation therapy, which has really knocked me emotionally.

“In 2013 I was diagnosed with a heart condition where my heart rate would shoot right up when I was training, which meant I had to spend ages recovering and I knew that I had to have an operation to rectify it.

“Overcoming my heart problem as well as using my mum as an example of strength and courage has helped me in my swimming while I also try channel these experiences to make me a stronger athlete, especially because I owe my mum so much,” an appreciative Weber explained.

With the Games’ opening ceremony just two months away, Weber’s final preparations have begun in earnest as she looks to contribute towards the South African swimming team’s medal onslaught.

“I will meet up with Graham Hill and his swimmers in Italy and then we move on to Miami in July before heading across to Rio a few weeks before the Olympics to get acclimatised and prepared in racing conditions.

“There won’t be another chance for me to race a 10km event because it’s too taxing on the body and I need a few days to recover after events so my next 10km race will be at the Olympics!” she added.

Following her encouraging performance in Portugal last weekend, the dream of adding an Olympic medal to her ever-increasing tally of achievements is not out the question however Weber’s expectations are not getting the better of her just yet.

“The Olympics is something that I have dreamt about for years!

“I have thought about what I could achieve at these Games and I think that a top five would be a really good achievement – I would be happy with that.

“There are only 25 swimmers that compete in the 10km event at the Olympics so I am going to give my all and I know that I will be mentally and physically prepared for the race.

“Who knows, if I have a good swim there could be a medal there for me!” Weber remarked confidently.

The KwaZulu-Natal Department of Sport and Recreation supported Elite Athlete Development Programme has proved Weber with the guidance and support that she has needed over the past year of her involvement.

“The EADP has helped tremendously over the past year and my biokineticist, Jarryd Rudolph has been incredible in helping me with my workout routine and programme and I am really grateful for all the team at Prime do for me,” she concluded.

Photo 1 caption: Despite having to deal with a number of obstacles in her quest, Elite Athlete Development Programme superstar Michelle Weber overcame these hurdles to qualify for the Rio de Janeiro Olympic Games in the Women’s 10km Open Water Swim. Photo: Jetline Action Photo/Gameplan Media