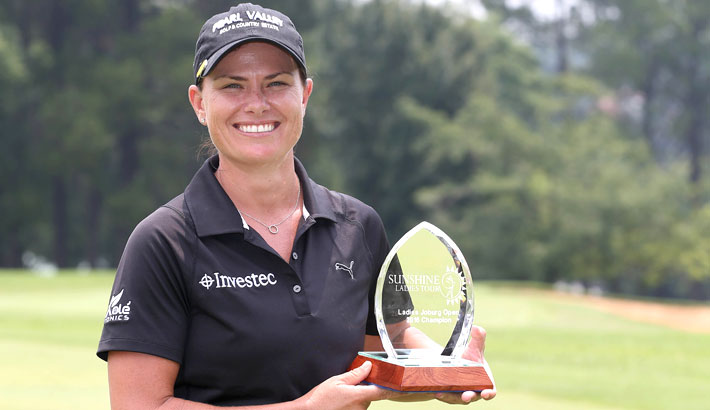 Lee-Anne Pace thrilled the crowd with a grandstand finish at Royal Johannesburg and Kensington Golf Club to reel in her seventh consecutive Ladies Tour title with victory in the Ladies Joburg Open on Wednesday.

The Pearl Valley golfer edged into the lead on 10 under with a birdie at the 10th hole on the West Course, but Bertine Strauss – playing behind her in the final group – birdied 15 to grab a share of the lead.

Pace shifted into high gear and showed the nerves and composure of a true champion.

She boxed a 12-footer for birdie at 17 and lagged a 30 meter eagle putt to an inch from the cup at 18. She tapped tap in for birdie and a final round six-under-par 66 to claim a five stroke victory on 12-under-par 204.

Strauss bogeyed the last three holes for a 72 to take second, while first round leader Ashleigh Simon’s 72 handed her third on 210.

Swaziland’s Nobuhle Dlamini, Monique Smit and Stacy Bregman tied for fourth on 211 after posting respective rounds of 73, 69 and 67.

Pace started the final round a stroke off the pace from Strauss and tied for second with Kim Williams, Dlamini and Simon.

She reeled in a hat-trick of birdies from the second, and erased a bogey at the fifth with birdie at nine to start the back nine at nine-under with a one stroke lead over Strauss and two shots ahead of Simon.

“Ashleigh played really well and birdied the 11th and 13th to tie me at 10 under, but I had no idea what Bertine was doing,” Pace said.

“Ash dropped a few shots, but I heard that Bertine was 10 under playing 15 when we got to the 17th tee box. There was every chance that she could birdie the par-five. I had my coach James Petts on the bag this week, and I said to him we better step it up.

“I hit a great shot into 17 and when I saw the line, I told James I had this. I knew the putt would drop. I must admit, I felt the pressure at 18, but James cracked a joke that broke the tension.

“We were discussing the pin position and I told him the pin was 4A. He looked at me and asked, ‘What hole are we on?’ That just cracked me up.”

Pace hit a solid approach pin high right, and she had about 25 meters from the fringe of the green to the pin. “I aimed to lag the putt close to give myself two putts for par, but the ball just kept going and parked right next to the hole,” Pace said. “It was pretty awesome to finish with a birdie.”

The Ladies Joburg Open proved to be the perfect start to the season for Chase to the Investec Cup for Ladies leader Pace.

“I am flying out tonight for two weeks on the LPGA Tour,” she said. “I really set out to win this week, because I knew I would miss the next two tournaments. I had 400 points in the bag after winning the SA Women’s Open, but this victory gives me a little breathing space.

“No doubt the girls are going to try and narrow the gap in the next two events. I really had to dig deep to come out on top, because the depth on the Sunshine Ladies Tour this season is incredible. Even the amateurs are playing unbelievably well and are gunning for victories.”

Ivanna Samu, the country’s number two ranked amateur, earned the Leading Amateur honour with an overall seventh place finish on three under 213 after rounds of 75, 70 and 68.

The next event – the Chase to the Investec Cup for Ladies – takes place at Houghton Golf Club from 25-27 January.

Final Results of the Ladies Joburg Open at the Royal Johannesburg and Kensington Golf Club West Course, on Wednesday, 20 January 2016:

Photo 1 caption: After lying one shot behind overnight leader in the penultimate round of the Ladies Joburg Open on Tuesday, Pace made magic to secure a final round six-under-par 66 to claim a five-stroke victory on 12-under-par 204, at the Royal Johannesburg and Kensington Golf Club in Johannesburg, on Wednesday, 20 January, 2016. Photo: Carl Fourie/Sunshine Tour/Gallo Images

Photo 2 caption: Having earned a 400-point cushion on the 2015/16 Chase to the Investec Cup for Ladies with her SA Open win in December last year, Pace’s hectic schedule takes her away from domestic competition for two weeks as she jets across to the USA to place markers on the season’s LPGA Tour. Photo: Carl Fourie/Sunshine Tour/Gallo Images