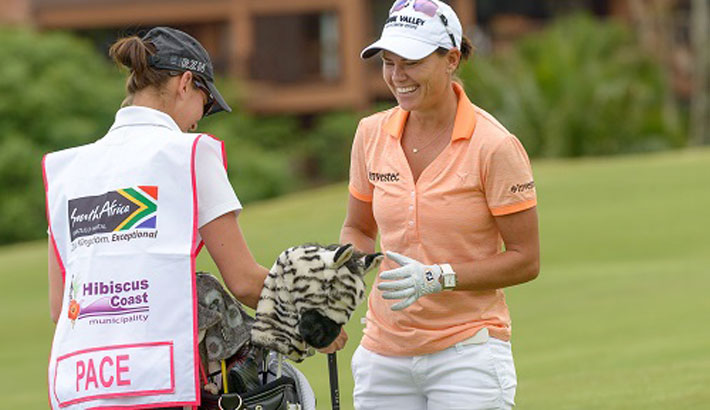 South Africa’s Lee-Anne Pace coped admirably in the testing conditions at San Lameer Country Club to build up an almost unassailable lead, in the SA Women’s Open on the Hibiscus Coast on Monday.

The defending champion reversed three bogeys for an even-par 72 and an eight stroke lead on one under 143 over amateur Lejan Lewthwaite and joint overnight leader, Kim Williams.

Williams from Centurion struggled to find form in the gusting conditions, but got to sole second with a birdie at 17.

However, a bogey at 18 for an 80 saw her slip into a tie for second with Lewthwaite from Serengeti Golf & Wildlife Estate, who also managed to erase three of her four bogeys to sign for a 73.

Pace had to chase down Holly Clyburn from England last year to force a play-off, which she won on the second extra hole. Not surprising, the double Investec Cup for Ladies champion is only too happy to sleep on such a big lead in her title defence.

“I’m going to enjoy the lead, especially if the wind blows again,” the Pearl Valley golfer said. “It’s really tricky out there, especially the tight back nine with all that water. Having a cushion is a welcome relief.

“I am striking the ball well and the putter is behaving nicely, but the wind swirled so much that it was tough to control the ball. I left a few putts out there, too, but overall it was a solid round, given the conditions.”

Pace also had some advice for the young amateurs competing this week.

“I know some of the amateurs are hugely disappointed with their scores, but they should give themselves credit for persevering under these tough conditions,” the Pearl Valley golfer said.

“It really has been trying and many of them have never played in an event of this stature or under conditions like these. This week is a huge learning curve and the chance to gain experience and they should just embrace the experience and enjoy themselves.”

Lewthwaite graduated from Texas State University in July and the 24-year-old had hoped to launch her Chase to the Investec Cup for Ladies campaign this week.

“I left my application too late, so I made it my goal to hunt down the Jackie Mercer Trophy as the leading amateur and to learn as much as possible from the pros in the process.

“I never imagined for a moment that I would be playing with Lee-Anne and Kim in the final round, so I am really stoked.

“I had a rough start, but I played much better today and hopefully the final round will be a more accurate reflection of my game. Hopefully Kim and I can give Lee-Anne a little run tomorrow.”

Second Round Scores* at the SA Women’s Open, at San Lameer Country Club on Monday, 30 November, 2015:

* All competitors RSA unless otherwise specified, amateurs indicated as (AMA)

Photo 1 caption: South Africa’s Lee-Anne Pace has built up an almost unassailable lead going into the final round of the 2015 SA Women’s Golf Open, at San Lameer on the Hibiscus Coast, on Monday, 30 November, 2015. Photo: Ian Taylor / Inkwazi Media