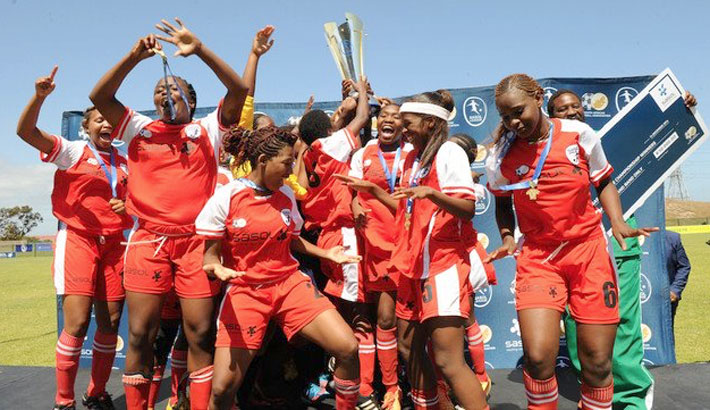 The sporting spotlight turns to women’s football as the South African National Football Association (SAFA) and Sasol get ready to host the 2015 Sasol League National Championships in Sasolburg, Free State from 7–13 December 2015.

The seventh edition of the tournament will again feature the nine provincial champions from across the country who, after finishing at the top of their provincial logs, have earned themselves a place in the Championships.

The 2015 edition of the Sasol League National Championships will provide another opportunity for the South African National Women’s Football coach, to further scout for talent in the build up to the Olympics in Rio de Janeiro in 2016, for which Sasol Banyana Banyana has qualified.

Vice President for Group Communications and Brand Management at Sasol, Elton Fortuin, expressed his excitement about the 2015 instalment of the tournament. “This marks Sasol’s seventh year of empowering women through sport, and it is rewarding to see the Sasol League National Championships continuing to grow each year.

“The development of the players, not only in terms of their football skills, but also their personal growth is admirable,” continued Fortuin. “The key purpose behind our involvement in the sport is to help break gender barriers, enabling women to realise their potential. We therefore wish each participating team well for the Championships.”

In KwaZulu-Natal, a hotly contested provincial final match between Durban Ladies FC and DUT Midlands saw Durban Ladies clinch their National Championships berth with an emphatic 3-0 victory against their counterparts.

Meanwhile, the Sasol League defending champions Cape Town Roses FC are gearing up to secure their title against the fierce competition, after they finished top of the Western Cape log with 80 points, just three points clear of the UWC Ladies team.

Tournament regulars Mpumalanga’s Coal City Wizards will make yet another appearance in the National Championships, after finishing top of the Mpumalanga log on 39 points.

Bloemfontein Celtic Ladies in the Free State have qualified for the Sasol League National Championships after finishing top of the Free State log with 84 points, a massive 17 points ahead of their closest rivals Ace Milan.

The Northern Cape’s qualifier featuring Galeshewe Ladies FC and RC Mills Ladies FC will be played on 1 December and the result will be announced after the fixture as been played.

As an incentive to celebrate the achievements of players during the tournament, Sasol and SAFA will be awarding the Diski Queen of each match R1000 in prize money and all individual award winners will receive R5000 each.

SAFA’s Technical Director of Women’s Football, Fran Hilton-Smith, expressed her excitement for this year’s edition, saying: “That time of the year has come where all nine provincial winners would have to compete and produce a National winner.

“The championship is not only about producing a winner, but also an opportunity to unearth talent for all three of our women’s national teams. Let the week ahead be a realization of dreams.”

Football loving fans in Sasolburg are encouraged to come to the Harry Gwala Multipurpose Centre to catch all the action of the group stages, quarter-finals and the semi-finals from 7 – 12 December. The final will take place at the DP de Villiers Stadium on Sunday, 13 December 2015 at 15h00.