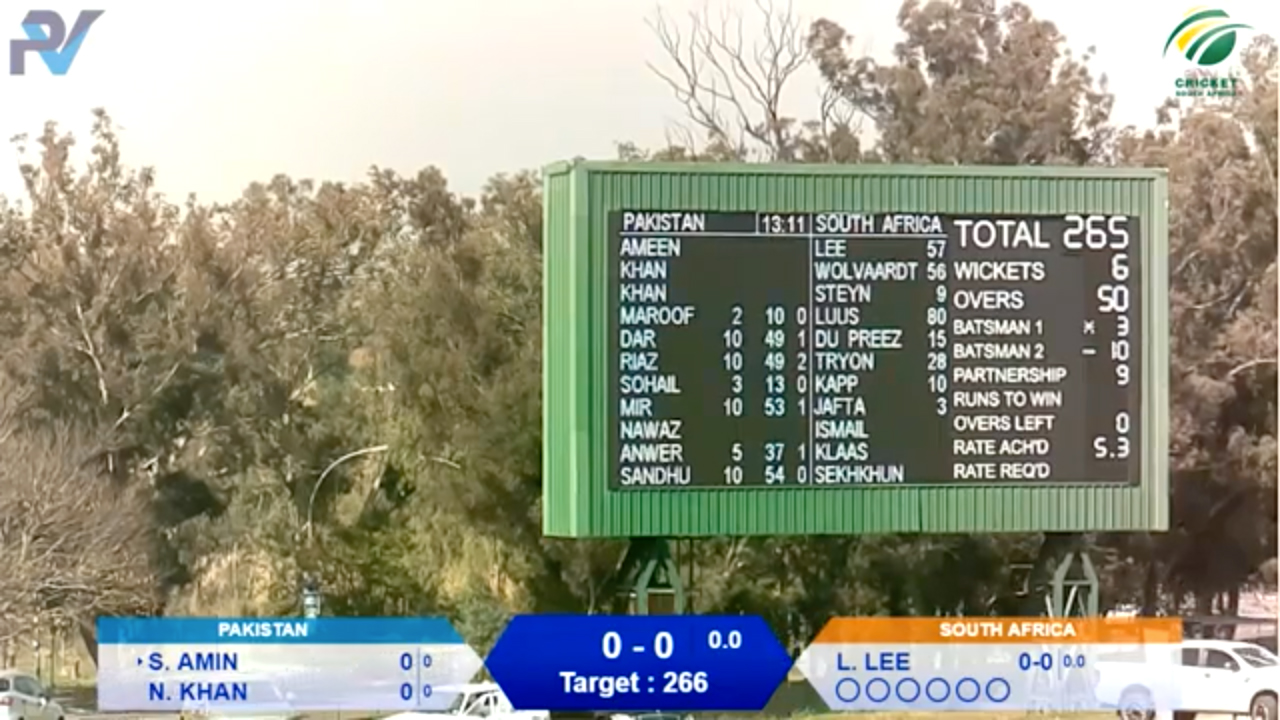 Captain Suné Luus lashed a free-scoring 80 and Masabata Klaas claimed three wickets but it was not enough as Pakistan managed to tie the decisive third ICC Women’s Championship (IWC) One-Day International against the Proteas in Benoni on Sunday – meaning the series was drawn at Willowmoore Park.

The hosts managed to pile on a strong 265/6 after being put in to bat first, but the tourists responded with 265/9 thanks to a plucky career-best by Aliya Riaz.

It was a disappointing end to the series, although the point shared by each side did little to bolster their prospects on the IWC table, with the South Africans staying fourth on 16 points and the Pakistanis up to fifth with 15.

As for the game itself, it was a see-saw that looked to be headed the home sides’ way until Riaz’s effort had taken her side to 243/6.

A Klaas (3/55) double-blow and Chloe Tryon run-out looked to have swayed things back in favour of the hosts, but a six by Nashra Sandhu from the penultimate delivery proved decisive as the two sides played to their first-ever tie against each other.

Early on in the day, the South Africans dominated proceedings thanks to half-centuries by openers Lizelle Lee (57 off 61 balls, 10 fours) and Laura Wolvaardt (56 off 84 balls, 5 fours). It was their 17th and 13th 50-plus scores respectively in the format.

SA Batters to the Fore

Their opening stand yielded 75, before Luus (80 off 84 balls, 6 fours, 2 sixes) and Wolvaardt added 60 for the third wicket to keep the home side in the driving seat.

The skipper hung around until deep in the innings, with Tryon (28) providing quick runs to help her side set 266.

Pakistan were reduced to 37/3 early on as Shabnim Ismail (1/42), Marizanne Kapp (2/57) and Klaas struck – the latter, fresh from a hat-trick in the previous game, removing the dangerous opposition captain Bismah Maroof for three.

Pakistan Don’t Give Up

The teams move on to their five-match T20 international series, starting at the Assupol Tuks Oval in Pretoria on Wednesday, 15 May.

Photo 1 caption: Invited to bat first, the South African recorded their highest score against Pakistan in ODIs, in the series deciding ODI at Willowmore Park in Benoni. Photo: Screengrab of the live broadcast on Youtube

Photo 2 caption: Stand-in skipper Suné Luus was in her element on Sunday, hitting an 84-ball 80 runs to help the home side to set up a challenging chase for Pakistan. Photo: Screengrab of the live broadcast on Youtube

Photo 3 caption: After Pakistan won the toss and chose to bat first, Marizanne Kapp was the first to strike for the Proteas, removing Sidra Ameen for four in the fourth over. Photo: Screengrab of the live broadcast on Youtube

Photo 4 caption: Masabatsa Klaas ended the match with the best bowling figures of 55/3 in her 10, and her double-wicket strike in the 48th over seemed to turn the tide to the home side’s advantage. Photo: Screengrab of the live broadcast on Youtube

Photo 5 caption: It was an over with something for everyone, but a result for no-one – a six for Pakistan, a run-out for the Proteas, but in the end, shared honours as the absence of a deciding super-over saw the match tied, and the series honours shared. Photo: Screengrab of the live broadcast on Youtube