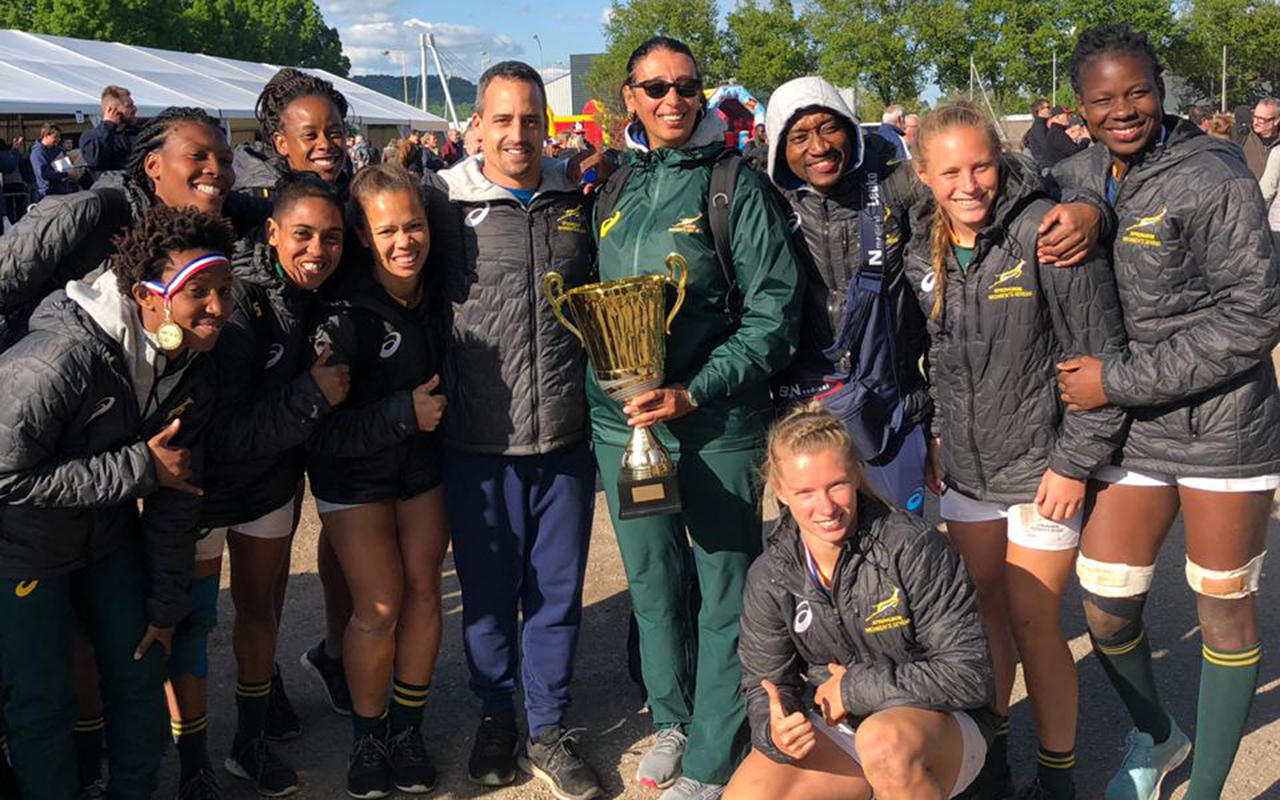 The Springbok Women’s Sevens team finished their short tour to France in emphatic fashion in Nancy on Sunday, winning the Stanislas Sevens tournament by beating Sweden 22-0 in the final.

The South Africans earlier in the week contested the Centrale Sevens in Paris, where they won the tournament by beating Ukraine in the final.

In Stade Matter de Nancy on Sunday, they outplayed Switzerland 46-0 in the Cup quarterfinals and then Poland 17-12 to set up the match against Sweden.

On Saturday, the South Africans had the better of Georgia, Norway and Poland in pool play.

The final was a tight affair in the first half, with the Swedes having most of the possession, but unable to break down the South African defence. The limited attacking efforts by the Springbok Women’s Sevens side were thwarted with handling errors and at the break, both teams were still scoreless.

The second half saw a much better effort from South Africa. Mathrin Simmers broke the duck for South Africa after good interplay with Nadine Roos before with Rights Mkhari rounded off a regular training pitch move to dot down.

Simmers then got a second straight from the kick-off, before Roos scored near the posts and converted her own try.

Springbok Women’s Sevens coach, Paul Delport, said their defensive effort was crucial in the first half.

“They held onto the ball for long periods and if it was not for our brave defensive effort, things could easily have gone wrong for us.

“The win is magic for the squad, it was a proper experiment for us, playing two tournaments in such a short time. We needed to be tested and we were. They came through this so well, we have no major injuries. We wanted to start get a winning culture going and this will do a lot for our self-belief.”

Delport said the variety of opponents was a good things.

“We had some easier games, but we were tested by the likes of Ukraine, Poland and Sweden and that was what this tour was about. We are taking a lot of positives back home.”

Delport applauded the squad. “It was a massive effort. We moved players around and asked a lot of them. I am very proud of what we did. We were tested mentally and physically. Our management deserves praise for that. We would love to be back.”

Nadine Roos was named Player of the Tournament in both the Centrale Sevens and Stanislas Sevens.

The squad arrive back in South Africa on Tuesday.

Photo 1 caption: An elated Women Boks Sevens squad will return home on Tuesday morning having emerged unbeaten in 12 encounters in their European tour, picking up the Centrale Sevens trophy in Paris on Thursday before reeling off another 6 wins in Nancy to lift the 2019 Stanislas Sevens Cup in Nancy on Sunday evening. Photo: Supplied

Photo 2 caption: The SA squad beat Georgia, Norway and Poland to top Pool C on Saturday, before beating the Swiss in the quarter-final and Poland in the semi, to qualify to line up against Sweden in the tournament final. Photo: Supplied

Photo 3 caption: The Swedes were confronted by a determined Bok team, but did well to end the first have of the final without a score to the credit of either side. Photo: Screengrab of the match broadcast on YouTube.

Photo 4 caption: Things were vastly different in the second half, with the Women Boks running in four unanswered tries, with one conversion, to win their second title in four days against Sweden by 22-0. Photo: Screengrab of the match broadcast on YouTube.

Photo 5 caption: Lifting this glorious trophy will come with great joy to coach Paul Delport and this most exciting South African team. Photo: Screengrab of the match broadcast on YouTube.