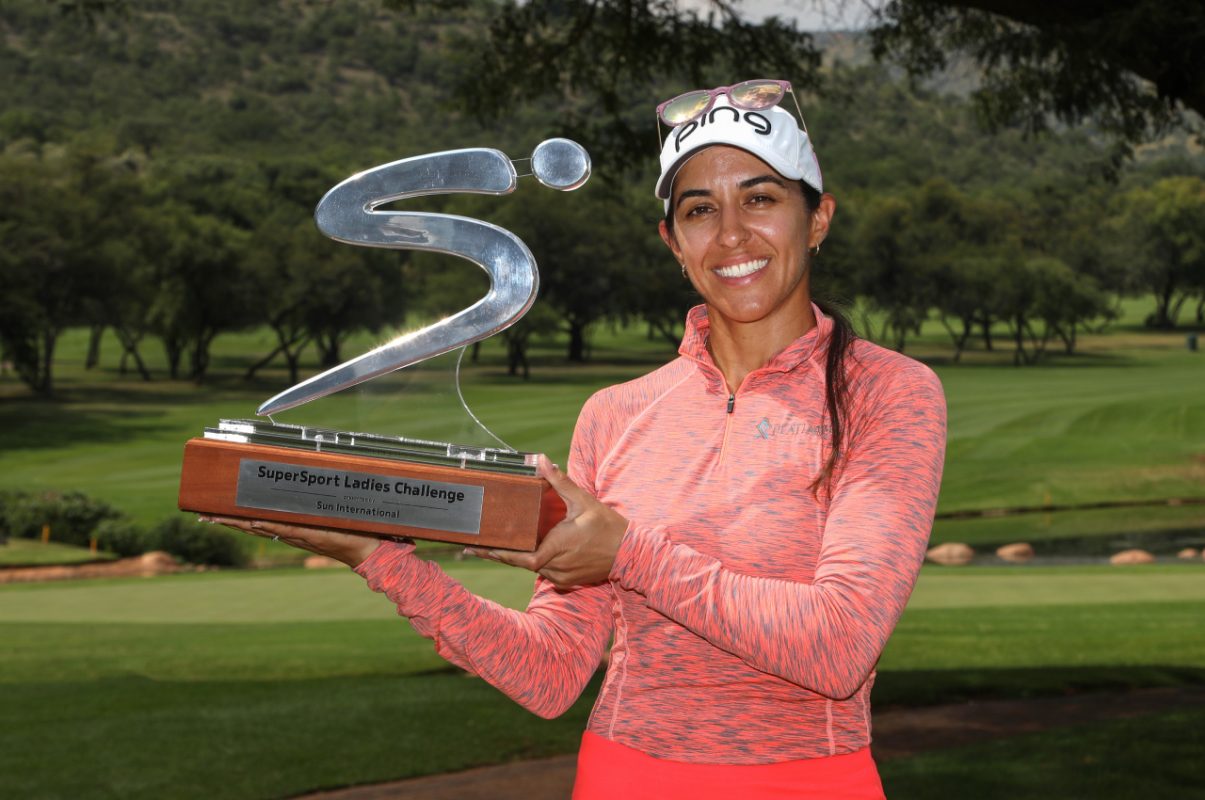 Her five birdies and four bogeys in the closing round at the Gary Player Country Club took her to 13-under-par for the tournament, with Casandra Alexander in a distant second on three-under-par after a closing round of two-over-par 74.

“It means a lot,” said Reto of her first professional title in her home country.

“I’ve been getting lots of messages, especially from my family. It shows I can do it, and to do it here in my home country makes it that much bigger – one of my bigger wins, for sure.”

Reto battled her way through the front nine, finding things more difficult than they had been all week for her. She bogeyed the par-five fifth but regained that lost shot with a birdie on the very next hole. Bogeys on eight and nine meant she turned in two-over 38.

“There were lots of thoughts bouncing around in my head, and I was just trying to stay calm,” she said. “My breathing was a little off in the first couple of holes, and Casandra played so well. I needed to think whether I was supposed to press then. In the end, I decided to just keep doing what I was doing. After those bogeys on eight and nine, I turned and told myself that it was okay. I focused on the back nine and tried to see how many birdies I could get together.”

She regained some of her swagger with consecutive birdies on 10, 11 and 12. She picked up another shot on the par-three 16th, but then bogeyed the toughest hole on the course, the eighth. She kept her composure to make a closing par and run out an easy winner.

And it was the birdie on 11 which opened the doors for her.

“On 11, I hit a good drive on the correct side of the bunker, which I hadn’t managed to do on the first two days,” she said. “I tried to go for the green in two, but I hit it in the bunker. I got out of that to about a foot and made the putt for birdie. That gave me confidence for the next hole, because that tee shot is pretty tough as well.”

Behind her, after opening with a very threatening three consecutive birdies in the first three holes, Alexander reached the turn in three-under. That meant, at eight-under for the tournament, she was just two behind Reto at that stage and well in the fight. She bogeyed the 10th, which was a setback as Reto had picked up the pace, but she stayed in touch down the stretch until she made two double-bogeys in her final three holes.

Grant pieced together her best round of the week with a four-under 68, also the best score in the final round.

Pace, on the other hand, fought her way around the course to a three-over-par 75.

Meanwhile, GolfRSA’s No 1 ranked amateur Isabella van Rooyen held her own in the international company. The 18-year-old Clovelly golfer secured the Leading Amateur trophy with a joint 14th place finish after posting rounds of 75, 73 and 74.

For Reto, there is more to look forward to.

The fourth stop on the 2022 Sunshine Ladies Tour is the R1-million Jabra Ladies Classic at Glendower Golf Club next week, where her opposition will no doubt be hoping she will be a little less dominant.

“The confidence I’ve gained is pretty big, especially going into next week,” she said, “but I’m still going to be doing my routines and focus on that, because I don’t want to get too ahead of myself. This will be the first time I’m going from a win to another tournament, so I don’t know how it will feel. But I’m just going to enjoy the feeling. I’ll have more family out there as well, and maybe that support will make the birdies fall.”

It’s the home support, but so much more that Reto will carry with her.

“From the minute I got here until now, I’ve just been enjoying it,” she said. “I’m very grateful for the opportunity. I’ve done a little bit every day, from sight-seeing to trying different restaurants… everything is just so nice, and it’s a great culture here. I’m really grateful that I was able to experience it and come back. I was so much younger when I last saw it, and to come back and see how it has improved in so many cool aspects, it’s good to see.”